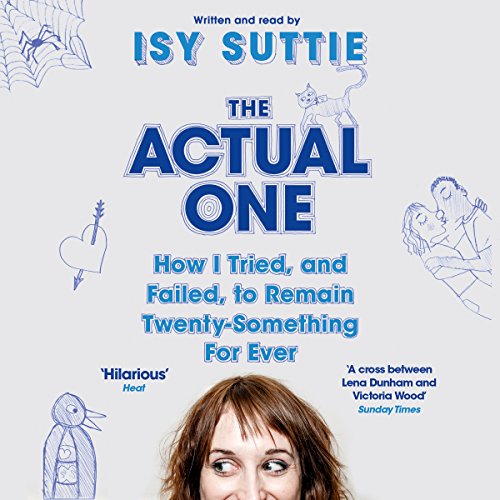 Performed by Isy Suttie, and featuring three songs from the book. This audio edition also includes an exclusive extra song and a unique introduction.

Isy woke up one day in her late 20s to discover that the invisible deal she'd done with her best mates - that they'd prolong growing up for as long as possible - had all been in her head. Everyone around her is suddenly into mortgages, farmers' markets and nappies rather than the idea of running naked into the sea or getting hammered in Plymouth with 80-year-old men.

When her dearest friend advises her that the next guy Isy meets will be the actual one, Isy decides to keep delaying the onset of adulthood - until a bet with her mother results in a mad scramble to find a boyfriend within a month.

From papier-mâché penguins to being stranded on a dual carriageway in nothing but a fur coat and trainers, The Actual One is an ode to the confusing wilderness of your late 20s alongside a quest for a genuinely good relationship with a man who doesn't use moisturiser.

What listeners say about The Actual One

well worth a listen

This was a lovely book about the transition from 20 something to 30 something. Izzy writes some lovely stories that are easy to listen to and often quite amusing. there's lots of mentions of bands and other pop culture that brought back memories.

I was surprised to find her more philosophical insights were actually quite insightful and thought provoking.

if you want an easy to listen to book, with some amusing anecdotes and something to make you think a little about how our relationships develop as we get older then read this book.

You know, everything is not an anecdote

I liked the recording quality and the author's delivery of the material, which was professional and obviously honed through stand-up work. I disliked the duration and quality of the material - 7 hours to tell a rambling tale that never really goes anywhere particularly exciting - and only listened to it in its entirety because I'd paid full price for it and it had become a war of attrition that I was determined not to lose.

I was reminded on far too many occasions of the scene in "Planes, Trains & Automobiles" when Neal loses his temper with Del and says, "You know, everything is not an anecdote. You have to discriminate. You choose things that are funny, or mildly amusing, or interesting." I don't want to give too many spoilers away but, as an example, the story of the author contracting norovirus and her subsequent recovery from norovirus - complete with what she had for tea when she felt a little better - was none of those things. There are some funny bits and it's not without its charm entirely, but this story could've been told in less than half the time and it would have been twice as funny with the waffle removed.

Would you ever listen to anything by Isy Suttie again?

Probably not. I bought it on the strength of R4's "Love Letters" which was passably entertaining but this was not up to the same standard.

What does Isy Suttie bring to the story that you wouldn’t experience if you had only read the book?

The author is a professional comedian and actor and, as I mentioned previously, her delivery improved but could not save the material. Had I read the book rather than listened to it, I would not have made it to the end.

Do you think The Actual One needs a follow-up book? Why or why not?

Please, no. It's seven hours of filler, so there's really no need for a sequel.

I feel like this is a really mean-spirited review, and I'm sorry that I have written it - I have no desire to upset the author and was considering seeing her play live before this - but I don't want anyone else to buy it thinking that it's going to be great. It's really not. I wanted to like "The Actual One" but found it tiring and progressively more grating as it ground to its conclusion.

Tales from a Interesting Life

I really liked Isy as soon as I heard her on the radio. she has a sing song voice that immedietly reminded me of Victoria Wood.
However, the similarities stop there.
Isy paints a painful yet happy picture of her struggles to remain young.
What emerges is an incredible sense of fun and a truly remarkable and strong set of close knit friends.
Even as a 57 year old I could help but laugh along even though some of it was quite painful and close to the heart.
Buy it. You will listen at length.

Some of the best fun with your clothes on

If you love Isy Suttie, you will love this. Always amusing, sometimes rolling around funny and occasionally touching but never dull.

Charming narration (enjoyed the descriptions of the drawings more than the songs) laughed out loud lots and there were a few touching moments. I was a bit worried during the intro when she apologised in advance for all the sausage mentions that it might be too quirky but it wasn't. isy is a talented performer and writer, honest (probably) and likeable.

Enjoyed the story as a little escapism, but the long slightly self deprecating introduction was unnecessary and stopping to describe the sketch of the scene you drew doesn't add more, it breaks the flow and I found it unhelpful.

Funny, with many laugh out loud moments, heartwarming and hilarious. Would recommend to anyone the other side of 40. Makes me want to visit Matlock. A wonderful book.

Lovely book, made me nearly crash the car a couple of times though and as someone in my mid/late 20s felt on point.

Many laugh out loud moments - and she has a lovely voice! Fab songs too