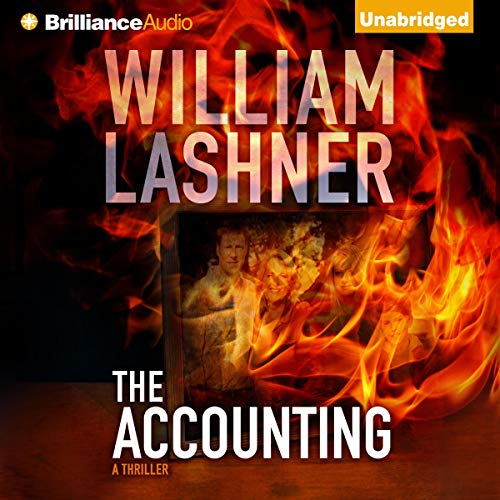 Jon Willing was just a teenager when he and his buddies Augie and Ben stole a fortune in drug money. Brazen with youth and stoned out of their gourds, they thought they had the perfect plan for getting away with it.

Twenty-five years later, Jon’s marriage is in ruins, his kids are virtual strangers, and the recession has decimated his finances. When he finds Augie murdered in Vegas, Jon knows his past has risen from the grave to grab him by the throat. Now Jon Willing faces a choice: run to a paradise of wine and women and endless sunshine or confront the demons from his past and fight for what’s left of his imperfect suburban life. But is it a life worth fighting for? Hurry and decide, Jon, because the piper is coming, and he always gets paid.

What listeners say about The Accounting

Good story funny. the narration was great gripping from beginning to end. Loved Every moment

A Great Suspense With Great Depth of Character

This is the tale of 3 best friends who discover what they and the world would call a great treasure. But it's ownership comes at a great price, far more than the true value of the treasure itself.

It includes the story of a bully from the boys past. A violent and angry man who learns the power of forgiveness, "The price of freedom," he says, "is high because you have to let things go."

So as you read in the editor's synopsis, the hero is forced into a dangerous game of cat and mouse in order to save himself and his family. It's non stop action with plenty of humor, but also a great deal of depth.

Twenty-five years ago three young men made a decision that would forever change their lives. Now some old debts are to be paid back the hard way. Thugs and the mob are coming out of the woodwork now that some old rumors are being revisited surrounding a million dollar heist. Friends are not to be trusted and enemies may just save the day before all is said and done. A fast paced well written story topped off with good narration.

I couldn't put this down

This novel grabbed me from the start. I found myself really caring about the protagonist, who narrated the story. He's a middle-aged guy who made a mistake as a teen which continues to haunt him and his family. I was engaged with his present and past life, and was surprised with how much I loved this story. It was heading towards a 5 star review for me, but the exciting, action-packed climax did disappoint me, feeling like something I have read in so many thrillers. The mystery and characters drew me in, but the end just went for the action. Still, I strongly recommend this 4.5 star novel.

The book is told in flashbacks to a time when 3 high school friends got involved in something they should have stayed away from. One of them ends up dead and the other 2 are being pursued by unknown dangerous thugs. I did like this book because they are unique characters. I am getting tired of the same old characters from one trilogy to the next. It was worth a credit.

It took a while to get into the book almost 25-30% of the way through and I was almost going to return it. But then the book picked up. More than the story of retribution (which was enjoyable), it was the psychological aspects of relationships that the protagonist had that were more enjoyable.

The Truth Shall Set You Free!

I enjoyed the novel, a great diversion. It held my interest from beginning to end. A story about a teenage boy and his pals stealing drug money and thought that they would get away with it. They had a good plan on how to keep the truth hidden. They did for about 30 years! and then the truth came bubbling up when the housing bubble came crashing down. There were a couple of spots where I thought the leading character made some rather stupid moves that not only got himself into grave danger but also got his teen daughter kidnapped by the folks who wanted their money back... it all came together decently in the end. The narrator did a wonderful job. I enjoyed listening to Eric Dove.

Enjoyable and I listened to it over three days

Would you listen to The Accounting again? Why?

No-Only because I never listen to a book twice.

I liked the stories flow and the crisp writing with snap back dialogue.

I have read two reviews that said the reader did not finish listening or did not care how this one ended. Frankly I wonder what kind of a fiction book could please those reviewers. This is a solidly written story and it was performed well. I will look forward to more from this author.

Not Lashner's best. I need a likable protagonist.

This is the third or fourth book of Mr. Lashner's that I have read, Mr. Dove does a workmanlike job of narrating. The story is well covered by the other reviewers. My problem with the book, and also with a couple of his other works, is that Mr. Lashner has trouble creating a main character who is likable, and with whom we can identify. John Moretti/Willing is a frustrating combination of a decent man caught up in a nasty mistake of a generation ago, with the putz who keeps choosing the money that he and his buds have stolen over the wife and children whom he abandons, fundamentally because the money is more important to him than the family that he has created, including a wife whom he once loved unconditionally. She keeps offering him a chance to breach the profound distance that has developed between them, as J.J. is so focussed on the pressure of the secret that he holds. He might try trusting her for a change. She is his partner, after all, and his two kids are likewise feeling alienated by his secrecy, and his need to spend time concocting ways to protect the secret and plan his caribbean getaway. Are we narcissistic enough? This behavior is a fatal flaw in the character. He casts it as preserving the secret in order to protect his family, but that is self-serving. The life he wants is to be sailing around the islands of the Caribbean, boffing every native girl he sees, drinking as much as he can, and generally living the life of Margaritaville. Shallow, no? If you had $425,000 tax-free, wouldn't your ambitions be a bit more grown up? Wouldn't you want to do something worthwhile? Not J.J. He runs scared from the motorcycle gang whose money it is, from drug sales, of course. When they kill Augie, one of the three guys who stole the filthy lucre in the beginning, J.J. runs even faster and even more scared. The key problem with the book is that one doesn't identify in any way with J.J. or either of his buddies, and the biker gang of course contains some revolting characters, guys who slit people's throats for money that they "earned" by peddling meth to anyone who wanted it. Who to root for in this clash of thieves? As the legal eagles say, a pox on both of their houses. And as is the case with the large majority of books like this, the humor peters out after the first act, and we are left with hearing about seriously unattractive people with no redeeming virtues, not even a sense of humor. I lost interest in them somewhere during Act II. I could not care less about how this ends. Save your money or credit for something that is more worth your time and resources.

Well written, humorous yet meaningful. Great characterization. Brilliant narration. I thoroughly enjoyed this book and am looking for more from this author and narrator.

Not only was this a page turner that caught and held my attention to the end, it was a clever, well-written story with fascinating insights into human nature. More than just fluff, but as exciting as any great action novel.