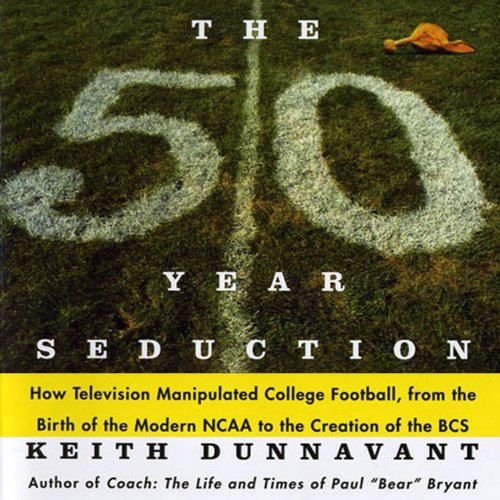 By: Keith Dunnavant
Narrated by: Jay Snyder
Try for £0.00

For more than a half century, television has played a primary role in securing college football's place as one of America's most popular spectator sports. But it has also been the common denominator in the sport's rise as a big business. Television, which multiplied the number of people who cared about the game, simultaneously increased the stakes.

The colleges, who once feared television's ability to create free tickets, gradually became addicted to its charms. Through the years, the medium manufactured money, greed, dependence, and envy; altered the recruiting process, eventually forcing the colleges to compete with the irresistible force of National Football League riches; aided the National Collegiate Athletic Association's explosion from impotent union to massive bureaucracy; manipulated the rise and fall of the College Football Association; fomented the realignment of conferences; and seized control of the post-season bowl games, including the formation of the lucrative and controversial Bowl Championship Series.

In The Fifty-Year Seduction, Keith Dunnavant shows how television helped shape the modern sport - on and off the field. In painstaking detail, the author chronicles five decades of tension and conflict, from the 1951 television dispute that empowered the modern NCAA to the inevitable backlash, culminating with the landmark Supreme Court decision that set the stage for the conference-swapping machinations of the 1990s and beyond.

What listeners say about The 50 Year Seduction