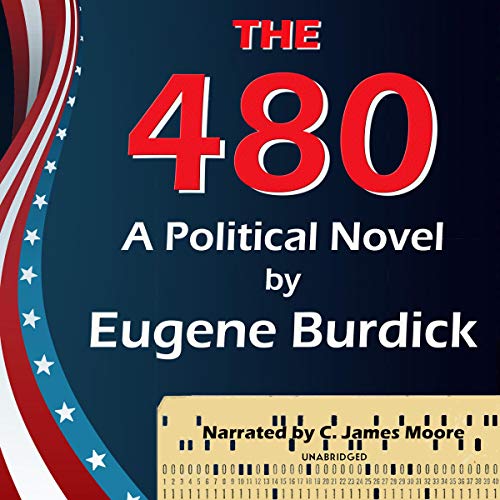 Released not long after President John F. Kennedy's assassination, in the run-up to the 1964 national election, Eugene Burdick's blockbuster political novel, The 480, foresaw the rise of social media and 21st century analytical data manipulation, the use of computer-generated voter profiles to shape - for better or for worse - the outcome of a major national election. Burdick - coauthor of The Ugly American and Fail-Safe - was a true socio-political visionary, ahead of his time by more than half a century.

Many passages and scenes in The 480 bear eerie resemblances to the social divisiveness, political blockades, and moral and ethical failures that dominate today's news cycles about America's place in the world. This sweeping 13-hour unabridged audiobook is the story of the rise of a morally grounded and ethically driven businessman, John Thatch - a political neophyte - to the heights of party stardom through plots by devious party operatives who hold the keys (IBM punch cards) of voter data, and potentially salacious journals, in their greasy little hands.

As noted in the original 1964 cover blurb, "This is the story of an extraordinary presidential campaign, of unwanted fame and public responsibility thrust upon a very private citizen, of love tested and courage found, and a new breed of political expert who believes the voters can be sold a candidate as readily as a housewife is sold a name-brand toothpaste."

The story spans the globe-from India and Pakistan to the Philippines and across length and breadth of the United States - in its full spectrum of shady characters, questionable motives, foreign adventure, heart-wrenching romance, and behind-the-podium intrigue. At its 20th-century heart, The 480 asks, and-in light of American politics in the twenty-first century-answers the question, "Could the American voter be masterfully manipulated to select a presidential candidate not by rational consideration, but by hidden design?"

In the current political climate this will cause the listener to think!!!

Listen to this book before Election 2020!

This audiobook sends chills up my spine! The story is so vivid that it felt like a memoir more than fiction; that's how real it was for me. Every American (red or blue) should get this book to see how easy it is to be influenced.
The narrator nailed it; the character voices, especially the female voices, were all distinctive and believable.