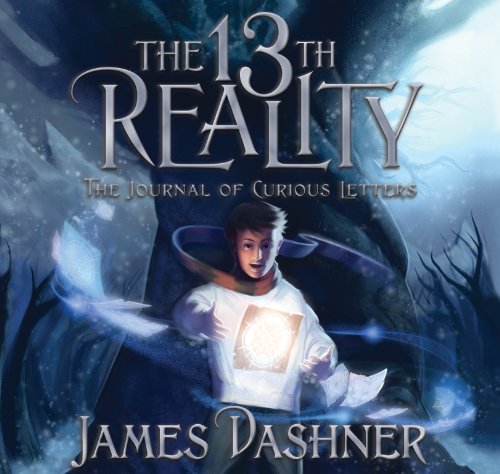 What if every time you made a choice that had a significant consequence, a new, alternate reality was created - the life that would've been had you made the other choice? What if those new realities were in danger? What if it fell to you to save all the realities? Atticus Higginbottom, a.k.a. Tick, is an average thirteen-year-old boy until the day a strange letter arrives in his mailbox. Postmarked from Alaska and cryptically signed with the initials "M.G.," the letter informs Tick that dangerous - perhaps even deadly - events have been set in motion that could result in the destruction of reality itself.

M.G. promises to send Tick twelve riddles that will reveal on a certain day, at a certain time, at a certain place, something extraordinary will happen. Will Tick have the courage to follow the twelve clues M.G. sends to him? Will he be able to solve the riddles in time? Will Tick discover the life he was meant to live? The first volume of an outstanding new children's fantasy series, The Journal of Curious Letters is filled with adventure, humor, riddles, and, oh, yes - danger....

As M.G. warns Tick, very frightening things are coming your way. Will you join Tick and his friends on an amazing journey through the Realities? What will your choice be?

What listeners say about The 13th Reality, Vol. 1

Perhaps. I have a lot of other books to get to, though.

My favorite character was Sofia, the Italian girl Tick meets. I loved her fraternal humor.

He's a good narrator. Nothing stood out either way.

I’d give this novel 3.75 Chi’karda drives out of 5. (Read the book and you’ll know what a Chi’karda drive is)
This is a really cute story. It probably reads and feels more middle-grade than any middle-grade novel I’ve ever read (take that to mean what you’d like.) There’s nothing really dark or extreme, so it should really be safe for all ages.
I always get a little apprehensive when a book tries to balance the notions of Science and Magic in the same universe. I’ve never seen it really work, but Dasnher did enough to avoid having it stand out (negatively) in this book. I appreciated that.
The main character of this book, Atticus Higgenbottom, understandably goes by “tick.” He’s so smart, that his family calls him “Professor,” but not so smart or flawless that he becomes unlikable. As a matter of fact, he gets picked on and bullied at school.
One day Tick receives a mysterious letter in the mail. He opens and finds a strange set of instructions that he must decide whether or not to commit to them. If he destroys the letter, then all will be as before; no adventure, no danger, nothing new. But, if he keeps the instructions and follows them, he can expect danger to seek him out, and challenges to thwart him at every turn.
Tick decides to follow the instructions in the letter and to help the people that the letter mentions. He wants to be part of something bigger than himself, and he’s willing to potentially sacrifice himself in the process.
Along the way he meets several other kids that have also received letters. They meet up through message forums and email on the internet. My favorite character is Sofia, the Italian girl that Tick meets first. I love the way the narrator (audiobook version) portrays her and all her fraternal digs at the other guys in the story. She has a good sense of humor, and rounded out all the boy characters.
As the story progresses, the kids communicate with each other about the clues they receive, and help where they can. All this leads up to a final moment where tick and the other kids have to follow a certain set of instructions on a certain day, and in a certain place.
As you can tell by the title of the book, the story deals with multiple realities. It’s a wild ride, and I would recommend it to virtually anyone, but especially young readers. It’s very wholesome, as it were, and a good time.
P.S. It’s probably worth noting that a lot of stories for this age group kill off parents, or come up with some other strange approach to getting them out of the way so that the children can be empowered to be the true protagonists of the story. Rather than doing that, Dashner actually had Tick confide in his father, and get power and trust from the adult to move forward the way he wanted to. That was a nice touch.

Not as good as The Maze Runner; more juvenile

I bought this because I enjoyed the author's Maze Runner series so much. Whereas the Maze Runner certainly appeals to high school students, YAs, and adults, this story is more juvenile and seems to be targeted, whether deliberately or not, to the middle school crowd. As an adult listener, it was a little boring and predictable at times, but it probably would hold the attention of young listeners..

An unlikely plot twist, which almost comes across as a deus ex machina -- is used near the end of the book.

The narrator was okay, not great. He doesn't do female voices very well. Some male narrators can, some can't.

There are several more books in this series; I will probably stop at book 1.

This was an entertaining, light book on the science-fiction side of fantasy. I love puzzles and riddles so I enjoyed the beginning. This leisurely beginning gave the book a casual, fun feel. Most of the action comes at the very end of the book. So close to the end that I was expecting a cliffhanger ending where the characters get in trouble and it isn't resolved. Not so. In a way, this book could be a prequel to the series. I expect the pacing will probably pick up in the following books.

I first started reading because of the amazing writer James Dashner, I know his work and I wanted to see a little bit of his earlier work,,, and as I expected, he didn't disapont me... amazing book, such interesting caracters, amazing history, as always the best way to tell a storry making you want more at the end of every chapter. Also is important to say that the reader from this audiobook is amazing as well, the way he changes into one caracter to another is very clever, and that gives you a good experience trough the whole book.

I read this book in highschool but forgot the story line.
This book was just as good the second time.

This imaginative story kept me riveted until the end. It is funny, quirky, and the plot twists were intriguing. The narrator did a great job. Fun from start to finish.

thought it was a great book. nice change from many story lines currently out there.

I really enjoyed Book 1 in the 13th Reality! The characters were well defined and realistic in there realm. Can't wait to read more.

All the characters are uniquely eccentric which makes them charming, and at times, hilarious. I'm going to be reading the next book presently.