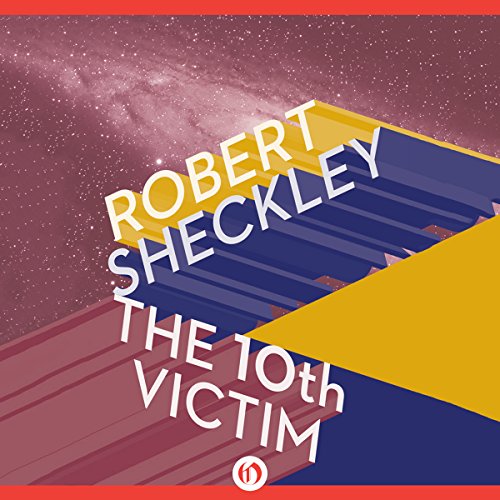 By: Robert Sheckley
Narrated by: Mark Boyett
Try for £0.00

From the very beginning of his career, Robert Sheckley was recognized by fans, reviewers, and fellow authors as a master storyteller and the wittiest satirist working in the science fiction field. E-Reads is proud to re-publish his acclaimed body of work, with nearly 30 volumes of full-length fiction and short story collections, all with striking new covers. Rediscover - or discover for the first time - a master of science fiction who, according to the New York Times, was "a precursor to Douglas Adams". It's the 21st Century and the ugliness of war no longer exists, except on a very personal level. Nowadays, people like Marcello Polletti, seller of Roman sunsets, and Caroline Meredith, lithe, beautiful, blonde, and backed by corporate sponsors and the Roy Bell Dancers, hunt, chase, and kill each other for sport and for the entertainment of the masses - until something oddly like personal human feelings pops up to confuse the players and up the stakes...as each of them seeks to kill their 10th victim and rise in the ranks of the hunters.

What listeners say about The 10th Victim

Sheckley At His Best!

I was REALLY hoping that Audible would release an audio version of the Hunter series by Robert Sheckley, and it looks like my prayers have been answered.
Not only is this outstanding book and amazing series finally available to listen to, it was made with expert care. The narration performance in this book is on par, if not better, than anything you'll find on ANY premier audiobook. Each character has his or her own completely unique voice, making it nearly impossible to get confused while listening to it. The strength of the narration in this book is SO good in fact, that it ALMOST feels like you are listening to one of those old-time 1950's radio dramas instead of an unabridged recording of a novel.

For those new to Robert Sheckley, I usually suggest trying out his novel "Dimension of Miracles" FIRST, but this audiobook blew me away.

Whether you are a huge fan of Sheckley's or a newcomer to his work, "The 10th Victim" is a perfect place to start in order to get a taste of what this wonderful author has to offer.