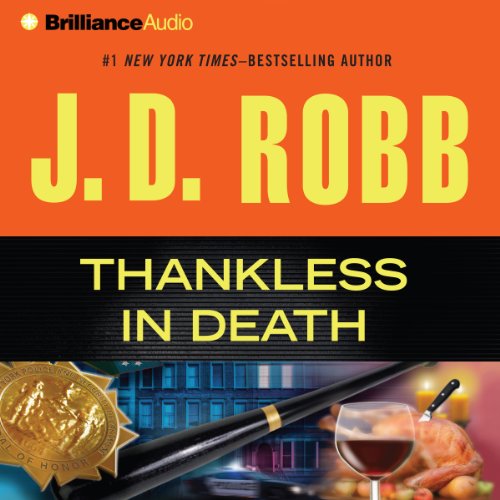 In the latest suspense thriller in the number-one New York Times best-selling series, the year 2060 is drawing to a close in New York City and loved ones are coming together for Thanksgiving. But sometimes the deepest hatreds seethe within the closest relationships, and blood flows faster than water….

Lieutenant Eve Dallas has plenty to be grateful for this season. Hosting Roarke’s big Irish family for the holiday may be challenging, but it’s a joyful improvement on her own dark childhood.

Other couples aren’t as lucky as Eve and Roarke. The Reinholds, for example, are lying in their home stabbed and bludgeoned almost beyond recognition. Those who knew them are stunned - and heartbroken by the evidence that they were murdered by their own son. Twenty-six-year-old Jerry hadn’t made a great impression on the bosses who fired him or the girlfriend who dumped him - but they didn’t think he was capable of this.

Turns out Jerry is not only capable of brutality but taking a liking to it. With the money he’s stolen from his parents and a long list of grievances, he intends to finally make his mark on the world. Eve and her team already know the who, how, and why of this murder. What they need to pinpoint is where Jerry’s going to strike next.

While I realize that murder is a violent crime, I felt this was over the top. There was also a lot of profanity. I hvae read all the Eve Dallas books prior to this and loved them, but I couldn't get around the violence and profanity. I returned the book.

The only reason for the four stars was, for me personally, the graphic details during the murders was too much for my listening. I've listen to/read many of the "in death" series and don't remember any with this level of detail. The narrator is excellent. Her voice/accent change makes the story. I still will read/listen to more of the "in death" series.

I love Nora Roberts and I've loved all her books. I also love Dallas. Urg I want to say more about this story but I absolutely hate spoilers, so I won't do it to you by going into details.
The narrator brings the story to life.
Reasons I enjoyed this audio book:
Happily Ever After, Witty, Romantic, Wonderful characters, Page-turner, Great world building, Unpredictable, Easy-to-read/listen, Entertaining, Action-packed, Twisted, Steamy, Funny.

Again, I wish I had been able to purchase the unabridged version of this book.

As always, Susan Erickson is the best narrator out there for this series. I can't imagine anyone else narrating the In Death series! The story was great and love the voices she gives to each character. A+

Where does Thankless in Death rank among all the audiobooks you’ve listened to so far?

It ranks high. I think it is the best of the "In Death" series so far and I've read all of them.

What does Susan Ericksen bring to the story that you wouldn’t experience if you just read the book?

She does an excellent job with the accents and different moods that need to be conveyed through the story. She did an especially great job with the voice/tone/mood of the antagonist in this story. It gave me the chills to listen to "him" talk.

This book was one of, if not the best Robb has done with this series. The characters were so real. The antagonist was one of the most dangerous, mean, spiteful and all around evil characters yet. There were parts that were gruesome to hear-I skipped a little. But the plot and ideas, cat and mouse situations were just superb. I also liked that Roark's family was in it and softened Dallas even more as a person. I'd recommend this to anyone who likes a good mystery,