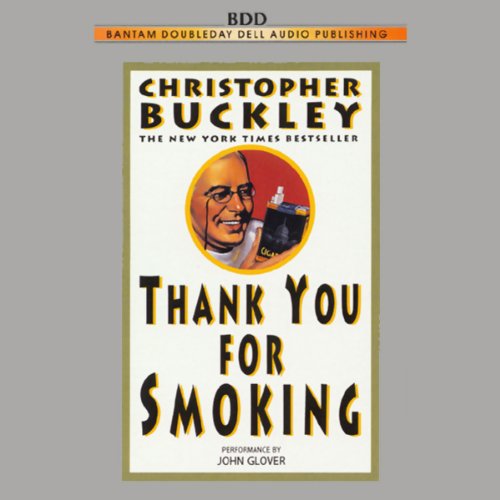 Thank You for Smoking

Nobody blows smoke like Nick Naylor. He’s a spokesman for the Academy of Tobacco Studies - in other words, a flack for cigarette companies, paid to promote their product on talk and news shows. The problem? He’s so good at his job, so effortlessly unethical, that he’s become a target for both anti-tobacco terrorists and for the FBI. In a country where half the people want to outlaw pleasure and the other want to sell you a disease, what will become of Nick Naylor?

What listeners say about Thank You for Smoking

Sometimes I would struggle to understand where the book was going. But I enjoyed it more and more as I listened to it.

Nick Naylor is the bad guy that's in all of us. He gets to be bad for fun and profit. In fact, he gets paid for lying, and job that many of us would probably really enjoy. This was a shorter book than I would have liked; I wanted it to go on I was having such a good time. The dialog was crisp and clearly written and the plot was well done, although the major plot twist I saw coming. Even though I saw it coming, it didn't lessen my enjoyment of the book in any way.
I recommend Thank You For Smoking!

This book is a much better listen than Buckley's Little Green Men. In addition to being educational (lots of smoking facts are presented) it is deliciously evil. It's always fun to play the bad guy and this book does just that. Highly recommended.

Too bad it was abridged; I liked the character development and I liked that he got us to like the main character, even though he was despicable. The abridgment made it feel like it was missing something.

I didn't find any extremes in this book...nothing awful, nothing great. The performance came closest to awful, but wasn't quite that bad, just not very good. I don't like Glover's voice, don't think his characterizations are particularly good, am not terribly impressed with his pacing and emphasis.

Since I'm not thrilled with the reader, it's hard to say whether the book would've seemed better with a better reader. I definitely did not pick up much i the way of humor, and definitely didn't find it "wickedly funny." It's not that I lack a sense of humor or don't like dark, sarcastic, or satirical humor --I particularly love all 3. I just didn't think they existed much in this book. The MoD sounded like a number of the people I've worked with...the worst ones, who spend all their time griping & sniping, pithing & moaning, just being generally annoying. I've been forced to spend too much time around people like that in life, I certainly don't find listening to them to be entertainment.

If you could rename Thank You for Smoking, what would you call it?

"You Would Never Have Expected A Lobbyist To Be This Funny".

Could have done without the musical introductions to new chapters. They did a nice job of reinstating the tone of the chapter, but they almost drowned out the narrator's voice.

The book itself is wonderful and rather apt and well worth experiencing. I really just want to mention that you may be better off physically reading it. While John Glover's performance is more than adequate, I would almost be willing to give 5 stars though some of his voices are unnecessary, the audio mastering is abysmal. Whoever designed the audiobook threw in really awful cheap music at random times and a volume so loudly I thought initially that it must be coming from somewhere else. Most times, it is so obnoxiously loud over the actual reading. I had to put myself through a couple of re-listens in order to glean the words of the book. Fortunately, the book is short, so you don't have to put up with it for long, and the book itself is great. just a heads up.

The movie was better

for the beginning my only complaint was that the production was over done (Seinfeld-esqueand music overlay) and that the narrator sounded like they are talking to a 90's tape recorder. As the story it lacked peripheral character development and for some reason turned into a weird spy-like novel

This book is a classic satire. Buckley is so witty. I only wish they realise an unabridged version.

Thank you for Smoking

It was a very entertaining book. I saw the movie a few years ago and wanted to listen to the audio version of the original book. There were slight variations but overall still had the same comical and political social substance. I was very pleased about that. Still, I recommend both the book and the movie. Definitely makes points about liberty, quality of life, public health, and individual choices which are the important foundations in this country. This body of work makes light of those subjects. However, they are nevertheless...key ingredients to the culture of social political framework of America.

it is common knowledge that most of the time a book is much more gratifying to experience than its movie counterpart. Although in this instance, the book and the movie are more like kindered spirits, intertwined in spirit but the morals, events, and overall feel of the story are largely separate in each instance of the story.