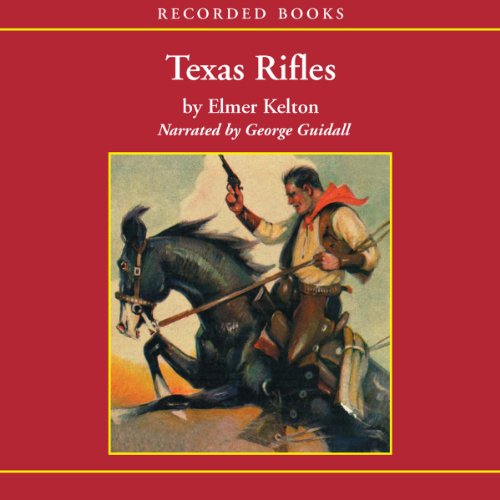 Six-time winner of the Golden Spur Award, Elmer Kelton crafts stories that carry listeners into some of the most vivid years of the American West. Texas Rifles is an action-filled tale of courage in the face of divided loyalties.

In 1861, men are enlisting in the Texas Mounted Rifles to keep the land free from Indian raids. There are larger conflicts, however. Texas has seceeded from the union while war brews between the North and the South. Sam Houston Cloud has just joined the Texas Rifles. But he is deeply disturbed by the suffering he sees on all sides: White and Indian, Texan and immigrant. Elmer Kelton has an amazing talent for sweeping away stereotypes and filling his novels with unique, unforgettable men and women who know the ways of the frontier. Audie Award-winning narrator George Guidall's performance is superb.

"His characters and narrative are colorful and well-defined, his plotting is taut and suspenseful." ( Publishers Weekly)

What listeners say about Texas Rifles

This is the consummate historical drama, filled with Indian battles, love interests and wonderful descriptions of the people and the land they treasure. If you enjoy stories by Louis L'Amour this book embraces many of the same themes and literary techniques that made him so popular. Kelton's description of the characters in this story are filled with compassion and personal detail hard to find in newer Westerns. George Guidall's reading can only be described as masterful, bringing excitement and life to the story. The character of Cloud was bold, heroic and tender, while maintaining a tough and honorable persona. A genuine leader and role model Cloud was respected and a true unwitting hero. Texas Rifles was everything I look for in action adventures, including bringing a slight tear to my eye at the tender final chapter. Five stars...with a bullet.

Bravo! This ranks among the best Westerns

This is right up there with the best Westerns I've ever read/listened. It is a real pleasure to be reading Kelton's work and live in Texas. He makes the authentic past so vivid, Before this one, my equal favorites are 'The Time It Never Rained'. and 'Slaughter'.

Too bad Hollywood doesn't know how to make a good authentic Western anymore.

Also, it's a great pleasure to hear Kelton narrated by George Guidall. George is like everybody's great-granddaddy recounting these Western tales. Just perfect.

Just What I Expect from Elmer Kelton

If you are in the mood for a good old-time western, you will always get your money's worth with Elmer Kelton. Set in Texas, where Kelton grew up, this story moves right along and is good entertainment. Not his best effort but worth a listen..