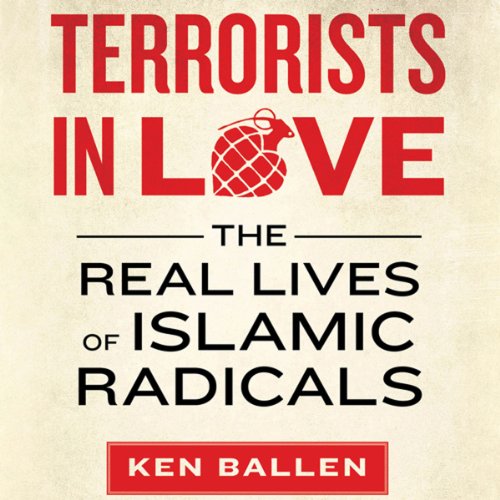 Imagine a world where a boy's dreams dictate the behavior of warriors in battle; where a young couple's only release from forbidden love is death; where religious extremism, blind hatred, and endemic corruption combine to form a lethal ideology that can hijack a man's life forever. This is the world of Terrorists in Love.

A former federal prosecutor and congressional investigator, Ken Ballen spent five years as a pollster and a researcher with rare access - via local government officials, journalists, and clerics - interviewing more than a hundred Islamic radicals, asking them searching questions about their inner lives, deepest faith, and what it was that ultimately drove them to jihad. Intimate and enlightening, Terrorists in Love opens a fresh window into the realm of violent extremism as Ballen profiles six of these men - from Pakistan, Afghanistan, and Saudi Arabia - revealing a universe of militancy so strange that it seems suffused with magical realism.

Mystical dreams and visions, the demonic figure of the United States, intense sexual repression, crumbling family and tribal structure - the story that emerges here is both shocking and breathtakingly complex. Terrorists in Love introduces us to men like Ahmad Al-Shayea, an Al Qaeda suicide bomber who survives his attack only to become fiercely pro-American; Zeddy, who trains terrorists while being paid by America's ally, the Pakistani army; and Malik, Taliban leader Mullah Omar's personal seer. Lifting the veil on the mysterious world of Muslim holy warriors, Ballen probes these men's deepest secrets, revealing the motivations behind their deadly missions and delivering a startling new exploration of what drives them to violence and why there is yet an unexpected hope for peace.

An extraordinarily gifted listener and storyteller, Ballen takes us where no one has dared to go - deep into the secret heart of Islamic fundamentalism, providing a glimpse at the lives, loves, frustrations, and methods of those whose mission it is to destroy us.

“Ken Ballen has managed the impossible for an American. He has worked his way into the intimate thoughts and frustrations and family conflicts that drove six young Muslims toward the jihadist movement, and he presents his findings in a series of compelling narratives.” (David K. Shipler, Pulitzer Prize-winning author of Arab and Jew and The Rights of the People: How Our Search for Safety Invades Our Liberties)
“Ken Ballen’s exhaustive research, scores of interviews, and gripping writing make Terrorists in Love a uniquely valuable––and sometimes chilling––behind-the-scenes account of the extreme beliefs that often fuel the actions of jihadist militants.” (Lee H. Hamilton, former Congressman and Co-Chair of the 9/11 Commission)
“An unusual atlas of extremism — a riveting, behind-the-scenes look at the events that turned six young Muslims into terrorists.” (Washington Post)

What listeners say about Terrorists in Love

Couldn't even finish the book

Would you try another book from Ken Ballen and Peter Bergen (foreword) and/or Peter Ganim?

The narrator's voice was annoying; a different person was needed.

The book disappointed me. I felt the author wanted listeners to sympathize and pity these people. I understand the importance of religion and family in the Arab culture but do not accept this as an excuse for their actions.