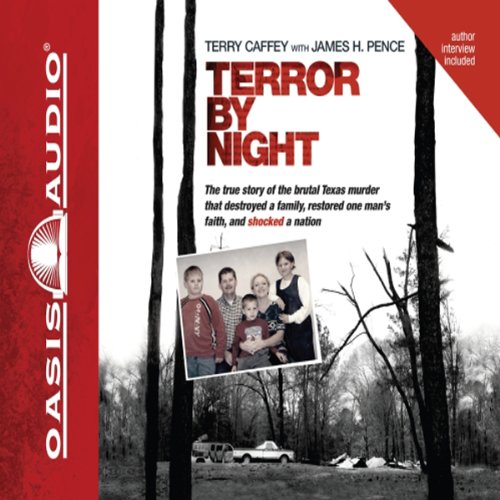 In one evening, Terry Caffey lost everything. His wife, Penny, and his sons, Matthew and Tyler, were brutally murdered; his home was burned to the ground, and his 16-year-old daughter, Erin, was in jail, charged with thiree counts of capital murder.

In one year's time, God would restore it all. At 3:00 a.m. on March 1, 2008, Terry Caffey awoke to find his daughter's former boyfriend standing in the bedroom doorway with a gun. An instant later the teen opened fire, killing Terry's wife and wounding Terry six times. As he slipped toward unconsciousness, Terry heard his son crying upstairs. More gunfire followed. When he regained consciousness, he felt the searing heat of his burning house. Terry knew it was too late to save his family, but even in the midst of the flames, he assigned himself a new mission. He fought to stay awake and escaped the burning house through a bathroom window.

As Terry stumbled and crawled four hundred yards through pitch darkness, he asked God to keep him alive long enough to identify the killer, and then to let him die. God allowed Terry to identify the murderer, but He didn't let Terry die. What happened next is nothing short of miraculous.

I enjoyed this audio book very much. I enjoy true crime. Here is a book written by a victim soon after the crime. It is well written and held my interest from start to finish. I don't think there is any book like it, giving all the details only an insider would know and so soon after the crime happened. It is riveting to hear the events that led up to the crime and the aftermath. Well written, nicely narrated, just all around excellent and gripping.

14 of 14 people found this review helpful

Maurice England did an outstanding job of reading this book. In itself, this book is a dramatic and compelling story of how faith overcomes tragedy. Maurice England made that story come alive.

Not your average true crime novel

This novel depicts a terrible event in one man's life but it is less a true crime novel than one man's spiritual journey. I would place it in Christianity, not true crime. It was interesting but extremely repetitive. Maurice England portrayed such emotion through the characters in this novel, he is a fabulous narrator.
If you do not like to hear about spiritual awakening, or Bible quotes this book is not for you.

Fascinating, inspiring story of one man's unthinkable tragedy,survival, and subsequent rebuilding of his life. Narration is excellent--couldn't have picked a better characterization. The only thing I would have changed was the placement of the interview of Terry Caffey at the beginning of the book. For those who are unfamiliar with his story (and I was), it tended to give away too much before the book actually started. It would have been better to have placed the interview at the conclusion of the narration. Other than that, an excellent listen.

A very sad story with a great ending. The narrator was perfect. A must hear book! Narrated with such feeling.

If you could sum up Terror by Night in three words, what would they be?

Have you listened to any of Maurice England’s other performances before? How does this one compare?

Haven't listened to narrator before but he did an excellent job.

If you love true crime, this is not long on actual details of the crime. It is a powerful story of a victim's survival and their journey with God to find the grace and dignity to live on after a horrific loss. I'm annoyed by the anti-religious who choose to write biting reviews because of the victim's belief in God. If religion isn't your thing, put the book down and be graceful, like the victim in this story. Terry is an unlikely example of human nature at its best, a negative soul will miss that important detail.

Couldn't get through it... too much bible-thumping

What disappointed you about Terror by Night?

The story was diluted with all the god-talk. It got so annoying and repetitive that I couldn't finish.

Has Terror by Night turned you off from other books in this genre?

Usually true crime books told from the perspective of the victim are fascinating, and this one was at first, but I am not religious and the writer clearly is, so I couldn't relate to his version of events.

Much more than the brutal murder of a family. Mr. Caffey shares with us how he gets through this horrific tradgedy. It is a real inspiration. I felt the narration could have been better.

Absolute torture to listen to Terror by Night. The narrator is annoying AND the book is over-the-top preachy and dripping in exaggerated holiness. #1 fan of GOD, but not this kind of insencerity. Maybe reading actual pages would be less painful ...

I expected to get a true crime book, but instead I got an evangelical with a bible quote at the start of every chapter. As the book progresses, we learn more and more about the author's christianity and not much about the crime, trial, motives, etc. Good if you want a sermon; not so great for a true crime accounting.

5 of 8 people found this review helpful