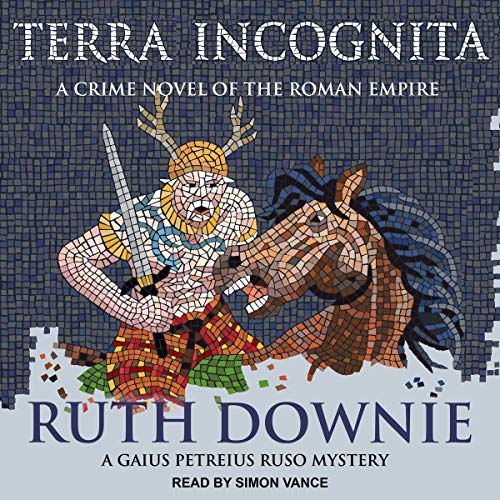 By: Ruth Downie
Narrated by: Simon Vance
Try for £0.00

It is spring in the year 118, and Hadrian has been emperor of Rome for less than a year. After his long and reluctant investigation of the murders of a handful of local prostitutes, Gaius Petreius Ruso needs to get out of town. With that in mind, he has volunteered for a posting with the army in the far reaches of Britannia - a calmer place for a tired man.

But the edge of the Roman Empire is a volatile place; the independent tribes of the North dwell near its borders. These hinterlands are the homeland of Ruso's slave, Tilla, who has scores of her own to settle there: Her tribespeople, under the leadership of the mysterious Stag Man, are fomenting a rebellion against Roman control, and her former lover is implicated in the grisly murder of a soldier. Ruso, once again unwillingly pulled into a murder investigation, is appalled to find that Tilla is still spending time with the prime suspect. Worse, he is honor-bound to try to prove the man innocent - and the army wrong - by finding another culprit. Soon both Ruso's and Tilla's lives are in jeopardy, as is the future of their burgeoning romance.

Terra Incognita shines light on a remote corner of the ancient world, where Ruso's luck is running short - again.

"A lively sequel to English author Downie's historical mystery Medicus....Immensely satisfying." ( Kirkus Reviews)
"Who would guess that life and death in the far reaches of the Roman Empire could be so darn funny?" ( Library Journal)

What listeners say about Terra Incognita

Gentle listen while lots goes on

This book, like the previous one, feels gentle while still keeping the interest going in the characters and the mystery. When starting I think I'm going to get bored but then I realise - some time later - not only have I not been bored but I'm wanting to know what happens next, to whom and why.

My only problem is, what seems to be the choice of the vaugely Northern Irish accent for the northern Britons. Seems a very odd choice. other than that, I loved it.

Having read Medicus I really thought I'd dropped on to a good series here, but the second book is just not "there". Felt the plot was too long winded and I think I caught on fairly early on who may have done it, but as I ended up returning the book I don't know whether I was right or not... and sadly I don't really care.

Good narration by the way.

Amusing, witty and well written. Fans of Tilla and her Medicus will enjoy this second instalment.

I love the characters .mild suspence and how subtly but unresistable it takes my imagination

I am a great fan of the mystery novels of Lindsey Davis, Steven Saylor and John Maddox Roberts, all set in pre 453 AD Rome. It was happenstance to discover the first volume, Medicus, in Ruth Downie's new series about a military physician in Roman Britain at the beginning of Hadrian's rule. Our hero is a provincial, not a "city of Rome" plebeian or patrician. He comes with a set of personal problems, family and financial, that form a back drop to his motives and actions and shape his character as a reluctant hero. Terra Incognita is the second volume. Not quite as interesting as the first, it, nevertheless, develops the story line in a happy, somewhat predictable, and amusing fashion. There is intriguing detail about the customs of the British tribes and the Roman occupiers of this misty isle. It is increasingly easy to imagine our physician staying in Britain after the legions withdraw, a distant ancestor of, perhaps, a noble Saxon family. I look forward to future adventures of the medicus and his housekeeper. Good work Ms Downie.

I listen to books at night after I turn off the light, and I try to find verbose tales with loose plots that will put me to sleep after about 30 minutes. The next night I rewind the iPod to find the spot where I fell asleep. Unfortunately, Terra Incognita didn't meet my needs because I couldn't fall asleep while listening to it and I kept restarting the timer on the iPod to the point that I was listening two hours at a time. Don't buy this book if you want to lull yourself to sleep. Also, the reader is so terrific that for the first time ever I searched for books read by him just to hear his voice again. He's one of the elite few whose women's voices are distinct without being fake. The man should be given a Oscar!

Warning… listen first to "Medicus" the lead off book in this tale of legion doctor Gaius Petreius Ruso's tale of Roman times. Ruso's a frustratingly dumb guy while his slave and love interest Tilla is a smart blonde. And each of them are kind of encased in the frustrations of their culture which create frustrations which we can see from our perspective as outsiders looking in.

Ruth Downie is VERY clever in making her setting a part of the ensemble cast of her books and its mysteries. My own frustrations with Dr. Ruso's ineptness of course is planned to increase the tensions in Terra Incognita. And after all, without tension, there's really no plot, right?

For some reason we are more likely to believe that characters are really ancient Romans if the reader is British, and Simon Vance provides that filter well. In all, this is a believable trip to another place/time peopled with intriguing characters. I'll probably listen to another in the series. But, remember my warning…. Read "Medicus" first, I liked it more.

A step back in time

It is interesting learning what life was like in Britain under the Roman rule. I also find it interesting to learn more about the state of medicine at this time. Gee, the English loved their beer/mead then also. Russo and Tila have gone to a northern out post temporary with the tenth. This is Tila's home area and we learn more about what happened to her family and to her when captured by raiding clan. Simon Vance does an excellent job with the narration. Enjoy a good story and learn some facts about the past in a most delightful way.

This adventure was even better than the last. Downie offers multiple points of view and all are interesting. Tilla continues to be one of the funniest characters going, and their relationship is priceless. Wonderful in every way.

Very much so. If you have listened to or read the SPQR series by John Maddox Roberts and enjoyed you will enjoy this as well. This is more centered around a Roman Doctor Russo who was stationed in Briton. Ends up solving crimes for the empire. He also marries a "Barbarian" Briton woman, but she's really the best thing in his life and he knows it. You have to read this series in order just like any other series or it will not make sense.

I really love both Russo and his wife Tilla. In many ways she makes Russo more earthy and realize what is really important.

Have you listened to any of Simon Vance’s other performances before? How does this one compare?

Simon Vance is one of my favorite narrators, when I'm looking at a new book I see who's narrating and since he's in my top ten I usually will take great interest in purchasing. He brings emotions and each character to life.

I think Ruth Downie is has done very well in this series and her research about Rome in
Briton is also very good. If you want to read great novels by great authors on the Roman Empire the three top are Robert Graves, John Maddox Roberts and Ruth Downie. They all have separate areas in their books but all are well researched with time lines and what was happening. I have most of the books by all three authors. I guess that is a major hint that I love historical novels

A fun listen. Good plot, good characters and an excellent narrator, Simon Vance. The historical aspects are quite interesting. Ruso gives a "Roman" perspective on the occupation of Britain in ancient times. I look forward to more books about Ruso and Tilla.

The further adventures of Ruso and Tila

This book continues the adventures of a medicus in Roman Britain, Ruso, and his slave/companion, Tila. This book spends a lot of time on Tila, exploring her background and developing her character. One of the best things about this series on Audible is the fantastic narrator who does a splendid job in bringing the characters to life.

The book is entertaining, well-written and well-researched without being stuffy. Has it all: adventure, mystery, complicated relationships and strikes a great balance with all of it. The reader also strikes the right balances with speed and cadence. Definitely recommend it to anyone looking for a good story and a little history.

A murder-mystery in ancient Rome, or at least an outpost of it. Love the characters, the story, and the attention to detail of life 2000 years ago in the Roman army and its interactions with the "natives." Great read. Re the performance, the accents of the Romans are more proper and erudite vs the accents of the natives of Britannia (Northern Britain, Scotland,) which are reminiscent of today's accents from those places, even though it's all in current-day English.