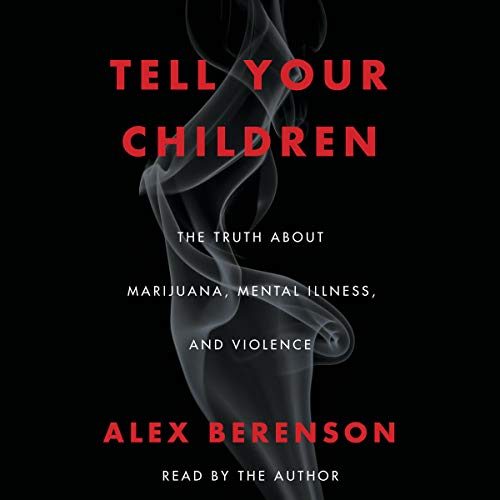 An eye-opening report from an award-winning author and former New York Times reporter reveals the link between teenage marijuana use and mental illness, and a hidden epidemic of violence caused by the drug - facts the media has ignored as the US rushes to legalize cannabis.

Recreational marijuana is now legal in nine states. Almost all Americans believe the drug should be legal for medical use. Advocates argue cannabis can help everyone from veterans to cancer sufferers. But legalization has been built on myths - that marijuana arrests fill prisons; that most doctors want to use cannabis as medicine; that it can somehow stem the opiate epidemic; that it is not just harmless but beneficial for mental health. In this meticulously reported audiobook, Alex Berenson, a former New York Times reporter, explodes those myths:

Psychosis brings violence, and cannabis-linked violence is spreading. In the four states that first legalized, murders have risen 25 percent since legalization, even more than the recent national increase. In Uruguay, which allowed retail sales in July 2017, murders have soared this year.

Berenson’s reporting ranges from the London institute that is home to the scientists who helped prove the cannabis-psychosis link to the Colorado prison where a man now serves a 30-year sentence after eating a THC-laced candy bar and killing his wife. He sticks to the facts, and they are devastating.

With the US already gripped by one drug epidemic, this audiobook will make listeners reconsider if marijuana use is worth the risk.

What listeners say about Tell Your Children

The author makes very good arguments using studies and research to back up. The anecdotal evidence can be quite harrowing and depressing to read, but very necessary in these trying times. This a must read/listen. Probably one of the most insightful and much needed information today.

I am no longer blind

I couldn’t have been more in support of decriminalization or legalization, but after this book, I will never touch the stuff again and I am deeply opposed to any further movement to allow use. There is nothing positive that can come from use and it is certainly not medicine for anything. The fact that so much data is available and not acknowledged is a tragedy. I am heartbroken that more people won’t read, furthermore believe, this book. Anyone with children should most certainly read this book. Those of us with mental illness should HAVE to read this book. I pray the word gets out how dangerous and real this epidemic is.

I wasn't sure how much I'd like this book. I'm not a pot user, but I've never been against use or legalization. The author doesn't have a history of being anti-pot, and this is a research heavy book so I gave it a chance, and was pleasantly surprised.

This isn't Reefer Madness in book form. Branson has definitely done his research, and incorporated a lot credible recent research so it's not just the same old studies that have been repeatedly used for this topic. A lot of his arguments break new ground about the increased potency of current marijuana strains, the significant number of heavy users, recent discoveries about brain chemistry, and medical uses of marijuana.

I don't agree with everything he says, but he raises important questions that need to be addressed as more states move to legalize pot.

Thank you for caring enough to begin your investigation and ultimately write this book! My husband and four adult children all use and refuse to listen to the research. Our youngest, age 20, has been in and out of rehab all due to marijuana. It breaks my heart to think of all the young people whose lives will be diminished because of marijuana. I pray this book is read by every person who needs to hear it’s truth.

Everyone should read it

General culture has said weed is safe, but this book convincingly points out that that for a small but certain subset of people who use weed, they become psycho, to put it bluntly.

Quick read and very informative; making it easy to take in the book. Very impressive and great update.

This book gives me facts to help my daughter

Excellent narrator, lots of facts up front that seemed boring, but needed to substantiate his findings about marijuana and the effects on our brains, especially with the young. This book should be made mandatory for high school curriculums.

A very important read for EVERYONE!

For or against legalization this book offers a fresh perspective based on hard sought out facts. I have such an appreciation for the authors journalistic integrity. It shines through in this book. Many personal wow moments as I listened.

The truth you always knew

This book confirms what we always knew. Pot is not the harmless fun we have been told about for 50 years. it is the addictive, gateway and psychosis inducing drug we always suspected.Unless more people know the truth, it will continue to grow in popularity and use. The deterioration of Colorado and other places that have legalized are reported here. The MSM will never admit the truth.
Read this and encourage othjers to read it as well.

This book lays out why marijuana use is not just bad for the person, but society as a whole.

The case against cannabis

Author Alex Berenson is a former New York Times reporter who is best known for his 12 novel John Wells espionage thriller series. In this non-fiction book TELL YOUR CHILDREN he aggressively takes on marijuana use as a potentially major cause of mental illness and violence. At age 75 and having never used marijuana or any other illegal drug it may seem that I have no basis for expressing an opinion on the topic. However, I attended college at a time when marijuana was rampant and I had a roommate for a time who was a very heavy cannabis user who developed schizophrenia (possibly unrelated?). Also, I was later president of a company which had many employees who were Vietnam War veterans over half of whom were still regular marijuana users. As our policies were successful at requiring they stop marijuana use (or lose their jobs) the vets became much more productive employees.

My observations provide the basis for a hypothesis based on anecdotal evidence, but they do not scientifically prove that cannabis use is negative. Berenson's arguments against cannabis also depend heavily on anecdotal evidence with a limited numbers of scientifically valid studies. The case for legalizing marijuana also depends almost exclusively on anecdotal evidence. What Berenson's book does is make a strong case for parents warning their children that cannabis use is potentially very risky to their health. My wife and I did that with our children and I trust they are doing the same with our grandchildren. The fact is that after more than 50 years of heavy THC (the primary, but not only, psychoactive chemical in marijuana) use we still do not know if it is safe nor if it medically useful.

I strongly recommend TELL YOUR CHILDREN and I commend author Alex Berenson on his newly released book.