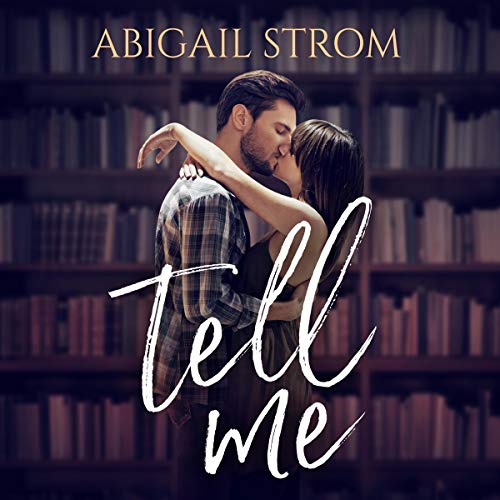 By: Abigail Strom
Narrated by: Leora Ben-Zev
Try for £0.00

Shy bookstore owner Jane Finch grew up hiding in the margins of her own life while her vibrant, adventure-loving sister, Samantha, dominated every plotline. She's made peace with it, unlike Sam's business partner, Caleb, who's always nudging Jane to go after what she really wants. Why should she care what blunt, brash Caleb thinks? They've never had much in common, except for Sam.

After tragedy strikes, they don't even have that.

Caleb can't quite remember when Sam's little sister stopped being like a surrogate sibling to him and became just...Jane. She's the most intriguing woman he's ever met, and so much sexier and stronger than she thinks. On the emotional journey to honor Sam's memory, the spark they've tried to deny becomes an inferno. This journey was meant to be an ending, but will they discover an unexpected new beginning?

What listeners say about Tell Me

Loved everything about this book c.f.

The thousand cranes melted my heart x a wonderful combination of love,grief and happy endings

Good Story - sadness in the middle!

Was cheating involved? No
Any major triggers to be aware of? Death of a family member in the middle of the story.

Scenes with heat... A few
What point does it start? 75%
How much of the story? 10%
Anything beyond M/F? No
If yes, explained

Was there so much sex or unrealistic sex that you rolled your eyes and/or skipped forward? No

The back story... The h is a dreamer and deals with low self-esteem. Her sister is beautiful and has a magnetism that draws people in. The H is a roaming cowboy and adventure junky who refuses to settle down. He really likes the h but is hesitant to ask her out.

The Romance... Goes from frenemies to lovers over the first 80% of the story.

The drama explosion... The H misconstrues an event and leaves the h with a cab driver 1000 miles from home.

Did it feel real or contrived? Contrived
Was it OTT? Yes
Separation involved? Yes
Was it resolved properly or rushed? Resolved ok

Final Notes... The drama explosion starts a bit early for my taste which lead to unnecessary drama. My wife enjoys that but it just seems a bit over the top for me. Different tastes. I really did like the story and will continue to listen to stories from this author.

Great story. Narration was good and enjoyable. Characters are unique and made for an interesting and enjoyable book.

The way the book is written is a little hard to follow. as there was only one narrator, I couldn't always tell who's point of view I was listening to. not a bad story. the characters were sweet enough.

Underdeveloped. It was an okay story and had the ability to be great it just fell short for me.

Good story of friends to more...facing ones fears and finding that the ONE was with you the entire time.

I enjoyed the story, but not all of the cussing. I know this is the 21st Century, but I think it was unnecessary, which is why I didn't give 5 stars.

A good plot a good premise and well-told just wasn't my cup of tea. There was a lot of extra. plot and information that I really could have done without, That was the reason for the 3 stars.

My first time for this author and I was very impressed. Will definitely read more.

I liked the story. It starts off as the cliché love story where a girl has a crush on some guy and the guy is somehow out of her reach but, the twist that occurs with Jane's sister just gripped me and took me off.

It was more of what I expected. I kept hoping to predict the outcomes but they kept on evading me. Somehow.

It's a nice book with simple language. I recommend it to anyone.

Not as Compelling as I Hoped

It's not a bad read. I enjoyed it overall, even though I wish some things had been developed better. It held my attention just enough, but it's missing that something extra that I'm always looking for in a story.

Still, it has an MC who loves books, and a modern cowboy who is a thrill seeker, so all of that leans towards fun. Plus, it has a whole Anne of Green Gables thread, and who doesn't love that? If you're a book nerd, you might enjoy this one.