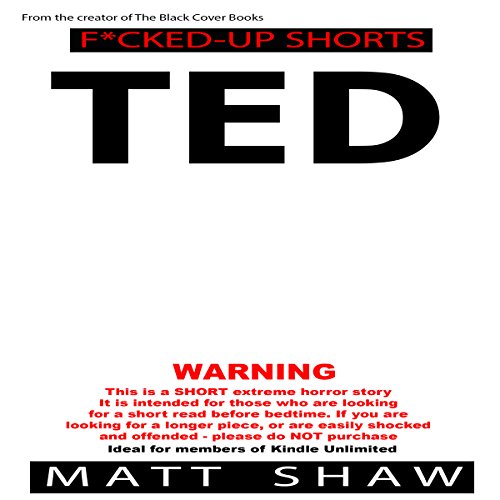 Ted is a character from Rotting Dead F--ks. This is a stand-alone story.

Some people are destined for greatness. They could create fantastic pieces of art to be discussed throughout the ages, they could invest something which furthers mankind, and they could even help solve world hunger or make important steps toward world peace for everyone. These people could be your friends, your neighbors, and even the person you unwittingly bumped into at the petrol station this morning. They could really be anyone - anyone, that is, except Ted.

Ted is an asshole - a psychopathic, racist human of the worst kind.

Whilst the aforementioned people push the human race forward, Ted takes them back to the Dark Ages again with his narrow-minded, idiotic views of right and wrong. Just be thankful he sees a psychiatrist. At least, if he is talking to someone about his feelings, he is less of a danger to society, right?

Join Ted for a day in the life of f--ked up thoughts, appointments, and hookers. And then thank God it was only a day and not longer.

What listeners say about Ted

A short dark and twisted story about a vile man. A racist psychopath who's date for the night is the blonde white lady he ordered. Read on to discover what happens

It Doesn't Get Any Better Than This

Ted is the story of a guy named - well - Ted. Ted is a racist, sexist jerk who originally appeared in Matt Shaw's "Rotting Dead F*cks." Not only is he all of these things, but he's a sociopath to top it off. If that doesn't make him endearing enough, he also hires prostitutes on a regular basis.

In "Ted," Ted hires a hooker after leaving his psychologist's office. The hooker he wants to hire is a tall, cute blonde and what he gets instead is a black woman. You can only imagine what happens from there.

Those who have read my reviews on this site know how much I respect Shaw as an author and Chris Barnes as a narrator. Scratch that. He's not a narrator, he's a performer. He does such an incredible job bringing this and other characters to life that you may easily forget your listening to a book and not the ramblings of a crazy man.

Remember what you're getting yourself into with this one. It even comes with a warning at the beginning. If you are easily offended by racists, misogynists, or otherwise ignorant people, or if a lot of vulgarity and sex doesn't do it for you - STAY AWAY!

However, if you like an entertaining, quality story, listen to the sample (FIRST) then, pick up your copy. It's disturbing, but a hell of a fun ride.

Much of Matt's work is darkly funny, but this one made me laugh till I cried.

want to be disgusted very quickly, you must listen

Come and listen to a story about a man named Ted,
A crazy sociopath, would rather see everyone dead,
And then one day something happened that did not compute,
This happened while he was having sex with a prostitute.

The above little jingle pretty much sums up the story of Ted.

Matt Shaw once again delivers a disturbing tale, that is up there on the vulgarity. This is the only reason I would call this a horror, much more of a psychological thriller. I did learn more than I ever wanted to about sexual terms such as, donkey punch,

Ted is a racist misogynistic sociopath that is obsessed with sex. Here Shaw takes us on a ride within the head of Ted as he has a good day. On this day Ted see’s his therapist, has sex with a prostitute and gets the scare of his life. I cannot give more detail than that without telling the whole story. I would not want to know what a bad day for Ted would be.

If you want to be disgusted very quickly, you must listen.

I am not sure how Chris Barnes can keep narrating Shaw’s books. Especially because he performs them so well. He does not just read the words, he brings them to life. In a way that makes everything seem so believable. I think that might be the most disturbing part of these audiobooks.

This story sort of feels like a cut scene from a larger book. Ted can only discribed as a product of Public schools education and lots of unvarified news . That said it's still funny listening to this story his line of thinking and what our writer decides the character should act on. It's got replay value.