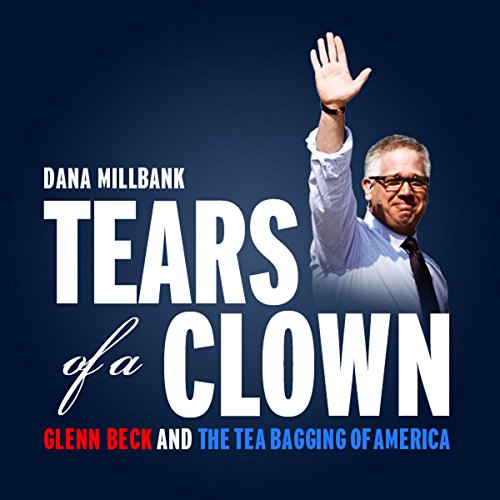 Tears of a Clown

By: Dana Milbank
Narrated by: Oliver Wyman
Try for £0.00

Washington Post columnist Dana Milbank takes a fair and balanced look at the unsettling rise of the silly Fox News host Glenn Beck. Thomas Jefferson famously wrote that the tree of Liberty must be refreshed from time to time with the blood of patriots and tyrants. It is its natural manure. In America in 2010, Glenn Beck provides the very refreshment Jefferson had in mind: Whether he's the patriot or the tyrant, he's definitely full of manure.

The wildly popular Fox News host with three million daily viewers perfectly captures the vitriol of our time and the fact-free state of our political culture. The secret to his success is his willingness to traffic in the fringe conspiracies and Internet hearsay that others wouldn't touch with a 10-foot pole: death panels, government health insurance for dogs, FEMA concentration camps, an Obama security force like Hitlers SS.

But Beck, who is, according to a recent Gallup poll, admired by more Americans than the Pope, has nothing in his background that identifies him as an ideologue, giving rise to the speculation that his right-wing shtick is just that - the act of a brilliant showman, known for both his over-the-top daily outrages and for weeping on the air.

Milbank describes, with lacerating wit, just how the former shock jock without a college degree has managed to become the most recognizable leader of antigovernment conservatives and exposes him as the guy who is single-handedly giving patriotism a bad name.

What listeners say about Tears of a Clown

Who is more of a clown the author or Beck?

This was the most tedious, boring book I have ever listened to. However, it seems the author in her viewpoint is as confused as Beck. Beck sees danger in our future. The author sees none. No mention of the perils of our times by this author. The author seems to think all is well with the things that are. No mention of oil depletion, worldwide climate change, loss of civil rights, the loss of arable land and decreased ground water to feed and alleviate the thirst of increasing numbers of humans, the loss of nutrition from foods grown in depleted soil, or the undue influence of rich, profit-minded corporations in all of our legislative bodies. So who is the clown?

Obviously written by a clown

What disappointed you about Tears of a Clown?

Great Title Audible.. Do you realize

What could Dana Milbank have done to make this a more enjoyable book for you?

Its a smear book.. written by our media..

If you could play editor, what scene or scenes would you have cut from Tears of a Clown?

pointless it is what it is...

I dont seem to find smear books coming up with my search on big left figures in the country.

Good book points out obvious, Beck is a A-- Clown

This was a fun listen. It will leave the listener with a good knowledge on why Beck is not only inconsistent in his statements, but also downright disingenuous. The question we are all left with is whether Beck is laughing all the way to the bank knowingly duping those looking for their daily "the world is ending" fix, or is he touched in the head. Either conclusion seems viable and this book gives great evidence about his ideologies and where they come from.

This book makes the assumption that most of his craziness comes from his conversion to the Mormon faith. But is brings up an interesting point that he was not unanimously accepted into the faith when put to a vote. Very telling on how he must have been for those that knew him.

Overall this book stays with Beck and gives good background information on his rise to fame and riches. Fan or not I think you'll find this book entertaining.

Could have gone a bit further

The author achieves her purpose by showing Beck's inconsistencies and wrongful slander from his own words. The author does a great job of using Beck's words to show how he is not a reporter or journalist, but a "rodeo clown."
2 criticisms:
a. The author does not go far enough. Come on, Dana, we now this is not an unbiased report. Usually after debunking Beck Milbank will thrown in a pithy one-liner rather than really giving an exegesis of what Beck is saying.
b. Since the book is categories of Beck's life/work it can get a bit tedious. After about 5 hours of listening I was convinced he was a farce and was ready to finish the book and move on.
Overall, I would recommend it. I am a Republican, but have been living in the UK for about a year I am returning to the US soon, I thought I would try to learn a bit about Beck since he has taken off at Fox since I left the country.

Beck Exposed In His Own Words

I am sure Glenn Beck is calling this "a hit piece" or "a smear job" but most of this book is simply using Beck's own words and past statements which suffeciently does the job of outlining how he uses fear and fringe conspiracy theories nightly on his Fox News show. I am not a fan of Beck but think he is a fascinating character and this book really does a great job of showing just how far out and crazy this guy has become.