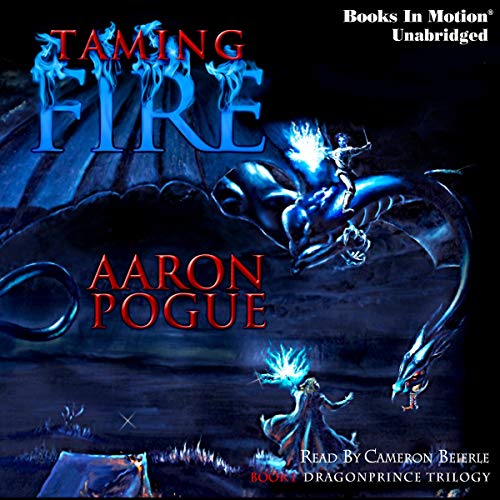 Daven Carrickson grew up as a beggar in the filthy alleys beneath the shadows of the palace. He's the son of a known thief, disgraced and despised. His only real talent is his ability with a sword, and his only real chance at finding honor or a home is a desperate dream of joining the King's Guard. Then, Daven receives a new future when Master Claighan invites him to study magic at the Academy. The wizard offers to make him into a new kind of soldier: a swordsman equally skilled with forged blades and mystic forces.

It only helps that Daven has no home, no family, and nothing left to lose. But when conspiring forces destroy the wizard's plans, Daven finds himself wanted for treason and murder. Hunted by a great black beast of a dragon, caught between the King's Guard and a rebel force led by a rogue wizard, Daven's only hope of surviving is to become more than he's ever dreamed possible.

What listeners say about Taming Fire

Wow what a ride this kid had to take

What made the experience of listening to Taming Fire the most enjoyable?

The Reader was most unexpected. He took his time to give the words more mass and shape when he paused on certain words. He also made the story real to the imagination. When your involved in a book, you have to be able to match certain aspects with the rhythm of the story. For example (if she grabs his left hand, that means his right hand is free, but if he takes an arrow in his right while holding a sword, then when the writer say's he dropped his sword and shouldered her out of the way and she hurt herself while falling, then her left hip of left hand would hurt because he shoved her with his left and she fell on her left side). as small as this sounds, you have to be able to see it in your head as its being read or your mind would reject it.

What other book might you compare Taming Fire to and why?

What does Cameron Beierle bring to the story that you wouldn’t experience if you just read the book?

He really knew the function of the story and it's lead characters as if he talked to them everyday at work.

when he finally confronted the King and his rabble.

I am highly anticipating the next installment of this trilogy. It was a very good read.

Where is the story here?

I'm surprised that this book has been so highly rated - but 3 hrs in and still no story.

This is a brilliant narration of an interesting story that heavily focuses on the weakness, incompetence, inferiority and fears of the main character through setback after innumerable setbacks. He accidentally got there in the end however.

Very interesting story with a lot of unexpected twists and turns. I can't wait to read the next book.