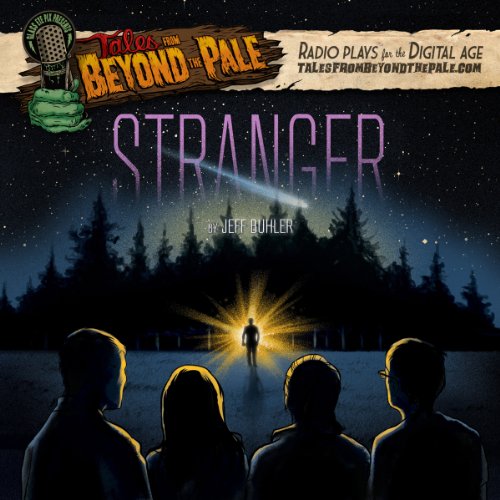 Tales From Beyond The Pale, Season 2 LIVE! Stranger

Conceived during a fog-drenched car ride with nothing beyond the windshield but a horizon-less void, Larry Fessenden and Glenn McQuaid created the acclaimed "Tales from Beyond the Pale," audio theater inspired by the vintage radio shows of Alfred Hitchcock and Orson Welles. Having previously released 10 studio-recorded Tales for Season One, Fessenden and McQuaid decided to up the ante and stage a second season of Tales before a live audience at the performance venue Dixon Place in downtown New York City. Tales Season Two delves even further beyond the pale with eight explosive tales to tickle your fancy and curdle your blood. The series is produced by filmmakers Larry Fessenden & Glenn McQuaid; Associate producers Lisa Wisely, Jenn Wexler.

In "Stranger" by Jeff Buhler, when four friends escape the city to view a spectacular meteor shower high in a remote mountain range, they encounter a stranger who walks out of the woods. The man from the woods wears no shoes, has a loose grip on reality and a very colorful fireside story to tell… Featuring the voice talents of Matthew Stephen Huffman, Kate Lyn Sheil, Helen McTernan, Jason Yachanin, John Speredakos, and Brenda Cooney.

"Fans of shows from A Prairie Home Companion to This American Life that take their stylistic cues from radio’s glory days should enjoy these macabre R-rated tales." ( The New York Times)
"The team at Glass Eye Pix and the filmmakers they’ve assembled are very much crafting great little spookfests that remind us why we love horror storytelling in general." ( Fangoria)
"Some episodes recreate pop-culture archetypes… Other episodes play with expectations of characters that seem familiar… At least half the enjoyment, though, is the colorful sound design" ( The Wall Street Journal)

What listeners say about Tales From Beyond The Pale, Season 2 LIVE! Stranger