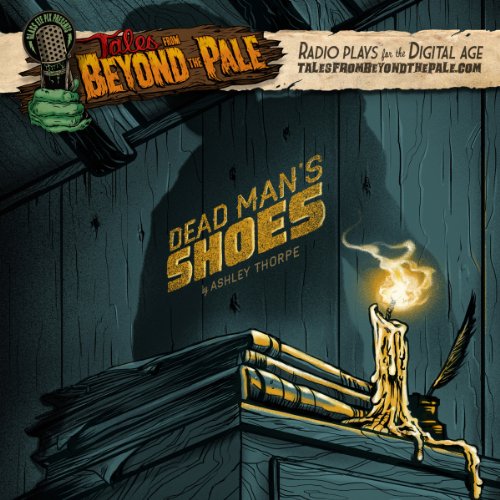 Tales From Beyond The Pale, Season 2 LIVE! Dead Man’s Shoes

Tales From Beyond The Pale, Season 2 LIVE! Dead Man’s Shoes

Conceived during a fog-drenched car ride with nothing beyond the windshield but a horizon-less void, Larry Fessenden and Glenn McQuaid created the acclaimed "Tales from Beyond the Pale", audio theater inspired by the vintage radio shows of Alfred Hitchcock and Orson Welles. Having previously released 10 studio-recorded Tales for Season One, Fessenden and McQuaid decided to up the ante and stage a second season of Tales before a live audience at the performance venue Dixon Place in downtown New York City.

Tales Season Two delves even further beyond the pale with eight explosive tales to tickle your fancy and curdle your blood. The series is produced by filmmakers Larry Fessenden and Glenn McQuaid; Associate producers Lisa Wisely, Jenn Wexler. In 'Dead Man's Shoes' by Ashley Thorpe, a struggling novelist with writer’s block takes on some translation work for a housebound elderly aristocrat who wants 'to put his affairs in order' before his death. The events that unfold require every ounce of the novelist's creativity he's got to keep them both alive!

"Fans of shows from A Prairie Home Companion to This American Life that take their stylistic cues from radio's glory days should enjoy these macabre R-rated tales." ( The New York Times)
"Some episodes re-create pop-culture archetypes…Other episodes play with expectations of characters that seem familiar… At least half the enjoyment, though, is the colorful sound design." ( The Wall Street Journal)

Believe It Or Not

When I was a kid, they used to have a show called Believe it Or Not. It had a scary intro and a narrator at the beginning and end. Each week they would present something off the wall, with no facts, just hear say. As a third grader it was spooky. This is exactly like that.

This is one of my favorite installments of 'Tales from Beyone the Pale'. It delievers on the creepiness and on the humor. The actors are great and it seems like they were having a good time when recording it. The live audiene seemed to enjoy it also. So if you're at all interested in the series, I definitely say start with this story or get to it as soon if you're already listening to another.

The story starts slow but this pays off in the end very creepy and fun I love the tales from beyond the pale series.

Ashley Thorpe's stories are so well crafted and entertaining without being over the top. I hope he writes another story for Tales Beyond the Pale.

Walk in my shoes

I enjoy these short stories, the man who opens is perfect I love the way he introduces the story's. The actors are great what can I say I just enjoy these stories emencly !!! I'd do wish there were more.