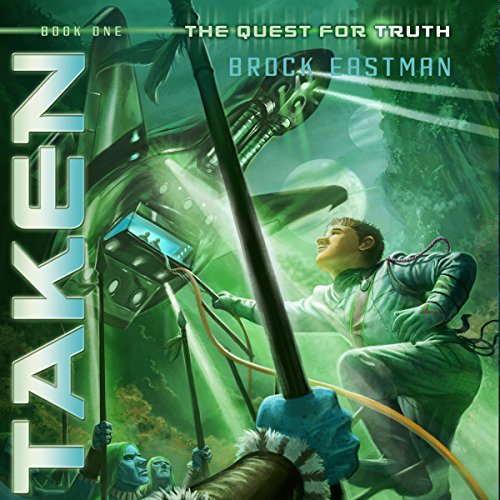 Suit up! Jump into hyper flight with the four Wikk kids! Forced into a high stakes hunt for their missing parents by the sinister Cpt. Vedrik, the siblings' only hope is their parents' Archeos e-journal. Can Tiffany decipher the clues within it? As time runs out, it's all up to Oliver and his Federation training to fly the Phoenix and protect his crew. But twins Mason and Austin endanger the mission when they unexpectedly meet...the blue boy! The Quest for Truth series unfolds as the four Wikk kids are thrust into a desperate race to find the mysterious planet Ursprung and stop the übel renegades from misusing its long-lost secrets. Ancient cities, treacherous villains, high-tech gadgets, the Phoenix-encounter: all of these and more on this futuristic, interplanetary adventure!

This book was a bit tricky to get into to start with due to the narrators inflections and accent. But the story soon took grip and I was hooked to the end. Can’t wait to listen to the next one

I love sci-fi. The opportunity to explore new worlds, to be taken on an exciting adventure where anything is possible.

And this book does not disappoint.

The characters are interesting and real and the story compelling.

It’s also refreshing to find a book that you would have no problem with any of your children listening to. The morals are good and clear and you’re left in no doubt as to right and wrong.

What was apparent very early on was the Christian influence. I didn’t know anything about the author when I started listening, but hints of the Bible were almost immediately apparent.

One thing I particularly loved about this book is that the author didn’t feel in any rush to leave a particular setting. Some stories, in an attempt to keep up the pace, take you from planet to planet, danger to danger. Eastman, though, manages to keep pace whilst also giving time for the characters (and reader) to explore the new worlds he is describing. And this I found immensely satisfying.

I would recommend this book to anyone, but particularly to those aged 7+

Full disclosure - I was given this audio book free by the author to review, but am under no obligation to write a favourable review. I just happened to like it!

After their archaeologist parents are kidnapped by the government, Oliver and his siblings, Tiffany, Austin, and Mason, head to a remote planet, Dar Isis, to discover what their parents were investigating. A planet about to be plunged into a very long winter, time is of the essence. When Mason and Austin get kidnapped by the natives while Tiffany and Oliver are out looking for someone, things start to look grim for the Wikk family. Can the four be reunited before time runs out? Can they save their parents? What were their parents looking into?

Narrator, L.C. Kane’s unique voices bring to life each well developed, intriguing character. The narrative style is smooth and keeps up with the pacing of the novel with ease. The plot is well developed, mysterious, and draws the reader into Oliver’s world. The characters are likable and add humor to this science fiction adventure. Fans of Star Wars, adventure, action, and science fiction will enjoy listening to this book.

fun book to listen to

Myself and my sister both enjoyed listening to this book. I am looking forward to hearing the rest in the series.

A fun start to a promising new series, Taken sets things up for what should be an entertaining story

I was offered a copy of this book in audio format from the narrator in exchange for an honest review.

Seventeen-year-old Oliver just came back from his first year at the Academy and he is getting ready for a trip with his parents and siblings. Everything is ready at the ship but their parents are missing. Oliver decides to go home to see if their parents are there, and discovers that they were taken by the Übel renegades. Oliver's parents are archaeologists, and their main mission is searching for Earth sprung, but their work is more important to some than Oliver thought. The four siblings will go on a dangerous mission to try to find and rescue their parents.

The beginning of this book made me think of a science-fiction Indiana Jones adventure for young readers, even though I am sure adults will enjoy it too. It is an action packed book in which the characters' ages range from eleven to seventeen, and there is not a moment of boredom.

It could perfectly be a five star book but it is a shame that none of the many questions is answered. It is not only that it ends on a major cliffhanger, but I have the feeling that it is part of a longer book. There are a lot of hints here and there and I am sure there is a great story behind it, but this book just merely skims the surface. It really leaves you wanting to continue reading just because it feels it ends in the middle of the story. I understand it is just the first book of a series, but I think it is necessary to give at least a conclusion at the end of each book to avoid frustrating the reader.

There is something I listened to in the book that I did not like, and it was about evolution, meaning that the characters did not believe in it. I do not know how the story will turn out in future books, but this point worries me since evolution is a fact.

L.C. Kane did a very good job narrating this story and transmitting the character's emotions. She made the story work perfectly well. I found an editing issue though; around 15:36 there is a small gap in the audio. It does not impair the story but it is a pity when this happens.

I would like to continue the series though, since I think the subject is extremely interesting and we are bound to an exciting ride.

The book was fine, but was not my favorite YA story. I am sure it would appeal to a much younger listener. The twin boys in the story were very irritating. Never having had twin boys, I am not sure if that is typical behavior. There was a major cliffhanger, so you need to listen to the next book to find out what happens.
The narration was great.
I was provided this audiobook at no charge by the author, publisher and/or narrator in exchange for an unbiased review via Audiobook Boom.

Definitely! I think anyone could get drawn in very quickly. I sure did.

I loved how everything began so smoothly for this series. We jumped right into the plot and got to know the characters and their personalities. It was almost like I was there with them all. Such an intriguing adventure!

What does LC Kane bring to the story that you wouldn’t experience if you just read the book?

I loved how she narrated everything. The emotion when the scene needed it, like in the prologue. The different voices for the different characters. Just the little things I noticed that made it all the more amazing. It reminded me of audio dramas.

I listened with my 9 year old son and he loved it! He couldn't believe how dumb the twin boys could be at times and the trouble they caused. There was plenty of action and the pace of the story keeps you interested and hard to put down. The narrator did a fantastic job with the acting, voices and telling of the story. I would recommend this to kids that like action, fantasy, and adventure stories. It is a little like a sci-fi 39 Clues. I'd say it'd be great for 2nd graders and up, even the adults will enjoy it.

I was given this free audiobook copy in exchange for a voluntary and honest review.

Great Start to an Awesome Series

This isn't anywhere close to the first time I've read them (although it's the first time I've listened to the audiobooks), but up until now, I haven't given them a proper review, which I will remedy now. Strike that--there probably won't be anything proper about this review, judging from the fact that all my words seem to have been replaced by hearts and smiley faces.

Just--this series, you guys! I almost didn't pull it off the library shelf; I accidentally started in the middle of the series; I had a hard time getting into the style for the first couple of chapters. Seriously, my relationship with these books should have been doomed from the start. But I absolutely <u>love</u> them!!!

First off--good Christian sci-fi. Let me say that again. Good. Christian. Sci-fi. I never knew such a thing existed until I found this series. (This was before I also discovered the Firmament books, but I digress...) This book is probably the lightest of the series on the Christian themes, just because it's the very beginning of the quest, and there aren't nearly enough pieces to start putting together yet. But trust me, it's laying the groundwork, and there are amazing things to come.

Second--the plot. Talk about keeping you on the edge of your seat! Every time the scene switches, I cheer and groan at the same time, because yes, I want to get back to the other characters! but no, I have to know what happens here, too! Not to mention--spaceships. And spaceship chases. And a galactic quest to rescue kidnapped parents from a sinister and mysterious group of soldiers while discovering clues to a buried history... Does it get any more epic? I mean seriously?

Third--the characters. I mean, first--the characters. I mean, I've put them third, but they should be first. It was the characters that first drew me in to this story, and they engrossed me so completely that I actually forgot I had ever had trouble with the style. (Trust me, this is huge; I have <u>never</u> had a book do that before this series.) The characters are diverse and unique, not perfect by any means, but completely relatable. And the sibling relationships--I seriously feel like someone must have had spy cameras planted in my house growing up. That's honestly how real they seem. I identify so much with Oliver, which is strange considering that I'm not anything close to a seventeen-year-old boy. But I have definitely been in the older-sibling-trying-to-make-important-decisions-while-your-siblings-are-debating-your-leadership role! And this book just absolutely nails it!

So here's my overall reaction to this series. Read the library's copies just about to death. Bought my own. Am now buying the audiobooks. Don't regret it for a single minute. :D

My Kids (and Myself) Love This Series!!

My family loves Brock Eastman's books. They are packed with action and adventure. They keep the kids attention throughout the entire book. We bought this first book just to "check things out," but soon ordered the rest of the series. Now, they are eagerly awaiting for the final book to be finished.
I've also enjoyed reading this series as a parent. As I've worked my way through seminary, I found it refreshing to sit down with a book that had a good story line, fun characters, and was easy to read. I've been caught up in the books as well and look forward to Hope coming out in the near future.

I loved Taken. The story was very well written and the characters were easy to identify with. I loved the adventure of it and that the adventure was written from a Christian worldview.