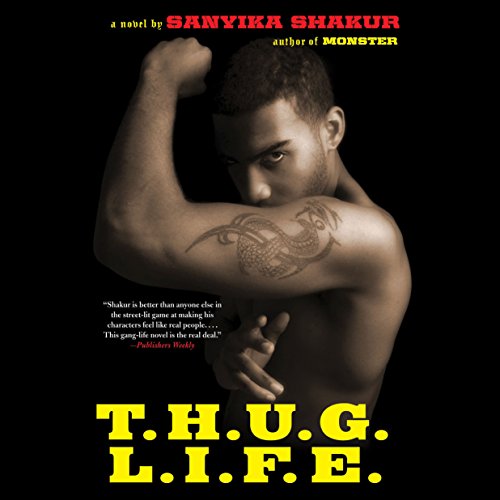 The follow-up to his best-selling memoir Monster, Sanyika Shakur's T.H.U.G. L.I.F.E. is a vicious, heart-wrenching, and true-to-life novel about an LA gang member that masterfully captures the violence and depravity of gang life.

Shakur's protagonist is Lapeace, the leader of the Eight Tray Crips gang in South Central Los Angeles. In a deadly gunfight with Anyhow, a Blood and Lapeace's rival since childhood, eight innocent civilians are killed. Anyhow is captured. Lapeace becomes a fugitive and he must hide out in the home of his girlfriend Tashima, a hip-hop mogul, as a pair of crooked LA detectives, John Sweeney and Jesse Mendoza, attempt to track him down.

This novel was written from the confines of Shakur's jail cell, and the authenticity of its street scenes - the relentlessness of violence, the do-or-die attitude of each side of the gang war, the sheer joy in the killing - is a testament to the hell that has been a majority of Shakur's life.

With T.H.U.G. L.I.F.E., Shakur delivers a powerful and gripping story about the terror of gang life and one man's attempt to free himself.

The author didn't disappoint me!

Having read the author's biography back in 93', I was instantly interested in this title! I am again intrigued by the author's ability to beautifully illustrate pain and chaos and make you think you're part of the story you get so immersed! It would be great if Audible also carried his biography "Monster :Autobiography of an LA Gang member" *wink wink*