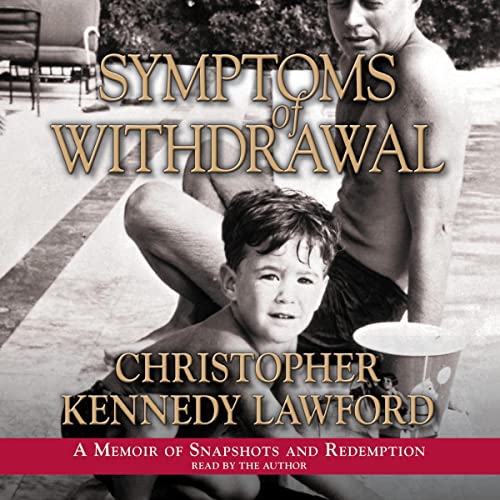 Born into enormous privilege as well as burdened by gut-wrenching family tragedy, Christopher Kennedy Lawford now shares his life story, offering a rare glimpse into the private worlds of the rich and famous of both Washington politics and the Hollywood elite. A triumphantly inspiring memoir, the first from a Kennedy family member since Rose Kennedy's 1974 autobiography, Lawford's Symptoms of Withdrawal tells the bittersweet truth about life inside America's greatest family legacy.

Lawford recalls Marilyn Monroe teaching him to dance the twist in his living room when he was still a toddler, being awakened late at night by his uncle Jack to hear him announce his candidacy for president, being perched atop a high-roller craps table in Las Vegas while Frank Sinatra and his Rat Pack swapped jokes and threw dice, and other treasured memories of his youth as part of America's royal family.

In spite of this seemingly idyllic childhood, Lawford's early life was marked by the traumatic assassinations of his beloved uncles Jack and Bobby, and he soon succumbed to the burgeoning drug scene of the 1970s during his teen years. With compelling realism mixed with equal doses of self-deprecating wit, youthful bravado, and hard-earned humility, Symptoms of Withdrawal chronicles Lawford's deep and long descent into near-fatal drug and alcohol addiction, and his subsequent formidable path back to the sobriety he has preserved for the past 20 years.

"You don't have to care about Kennedys to find this a moving tale of self-discovery and redemption. Whatever else he may have been, son, nephew, cousin, etc., Christopher Lawford shows himself here to be a writer of talent and grace." ( Publishers Weekly)

What listeners say about Symptoms of Withdrawal

Very good book and beautifully written. Honest, funny and heartbreaking with some juicy details for Kennedy fans! The latter part of the book was very inspiring too. Highly recommended.

A surprising tale of profound achievement and authentic charm -- being narrated by Lawford added wonderful texture. Another side of the memoir is how it reminds me of Andrew Morton's life of Diana. Different in the sense that the Diana story was never finished with stable discovery of self, but similar in telling a frank account against a major publicity machine -- the Kennedys in this case. Bravo, Christopher Lawford.

Would have liked an unabridged version

I bought the hardcover and read it some time ago. This was a good abridgment, but I still think you miss a lot this way.

So as a narrator, Christopher Lawford has a pleasant voice and (one of my pet peeves) is good with pronunciations.

It's an autobiographical account of his life so one tends to take some things with a grain of salt. Still, he covered things that I remembered from the hardcover edition and seems to be fairly honest with his shortcomings. Definitely worth a repeat listen.

A Courageous History of a Flawed Person

Nicely written and well-narrated. Conveyed well the perils of being whom he was doomed to be. I was sympathetic to him until the last chapter when he talked about leaving his wife for the flimsiest of reasons. While I respected and admired his struggles and the difficulties of being in the Kennedy sphere, I found him in the end to be an insensitive and selfish person. At the same time I admire his courage in baring himself to an audience of unknown people.

THIS BOOK IS A GREAT LISTEN!!

I really loved this autobiography!! I liked that the author narrated his story, Christopher Lawford does a wonderful job bringing across his emotion to the listener! Very well done!!

Born with the silver spoon

Chris Kennedy Lawford's got it all: fame, money, fortune and family. He's honest about his addiction to alcohol and drugs. He pins it on his family and himself. It is refreshing at least. Too bad he squanders it all and divorces his wife and kids in the end just after you think he's got his act together. Spoiled rich kid. Boo hoo.

What did I learn from it? My life's not so bad after all. Chris could have offered more learning concepts about how to make better life choices, especially if you have an addictive personality. This is a tell-all autobiography to air out his dirty laundry and try to redeem himself. I'd say he's still messed up.

If you’ve listened to books by Christopher Kennedy Lawford before, how does this one compare?

Did Christopher Kennedy Lawford do a good job differentiating all the characters? How?

He fawns over the males: the Kennedys, his cousins, his father, movie stars. Very little about the predominate females: mother, aunts, grandmother, sisters, his wife. Lots tabloid tales about bimbos and escapades. What's more important, Chris? Feels a bit empty and out of balance. But then, I'm a female so why should I have expected more from Chris on this side of the table?

Would you ever listen to anything by Christopher Kennedy Lawford again?

Who would you have cast as narrator instead of Christopher Kennedy Lawford?

His therapist since I felt I was present for his sessions during this book.

If you could play editor, what scene or scenes would you have cut from Symptoms of Withdrawal?

Just about all of them.

Not impressed. The Kennedy name is the only selling point of this book. Sorry.

I admit, I'm not the greatest historian or autobiographer, but I didn't buy the whole "poor me, I'm a Kennedy, I'm so different than all humankind". His existential experience was not something remarkable. I thought it was astonishing that he admitted his narcissism-way to go! Maybe treatment helped him come to that conclusion. The way that he read his autobiography was robotic- like and monotone. I believe that he was bored of it too. Gave this book a two because I did learn a few cool things about the Kennedies. Other than that, nothing special. Wouldn't get another book.

Too much about the famous family in this one for me. Not that I didn't think the Kennedy's were interesting, I do. I guess I have a hard time when it reads like someone with immense priveledge doesn't seem to get it.

A good read totally ruined by the ending

This was an excellent book until the very end; which, for me, dissapointingly ruined the entirety of the tale. Narration was excellent and the author was able to connect me with the personal and national emotional impact of the deaths of JFK and RFK like no author or narrative I'd ever heard before (these events occurred when I was a toddler). Author also provided some very interesting insights regarding the effects of being born into wealth, privilege and fame. However, I was bothered that in recounting the Ted Kennedy Chappaquiddick incident and the death of JFK Jr. the author failed to include even the merest mention that innocent, non-Kennedy deaths occurred in both of these incidents. Based solely on this recounting, you would think the incidents involved solely and only T. Kennedy and JFK Jr. This, then, leaves one to suspect that the only lives that count in the author's mind were those named "Kennedy". Indeed, this was confirmed at the very end when it appears that the authors only noble achievement was in overcoming addiction; but never his narcissism.

What a great voice and what a book!

I'm writing from my son's account. My name is Elizabeth. I loved Chris's dad, Peter, I'm a huge fan. I heard about this book long time ago and was really looking forward to reading it, but my eyes are so bad these days, so I decided to pick-up an audio book. I'm so sad it's abridged. But Chris sounds so wonderful, he should be doing voice over work! I have to say, Chris has much sexier voice than his father. It's much deeper. It is a wonderful book. I'm still looking for someone to read me the whole book...may be I'll get lucky.