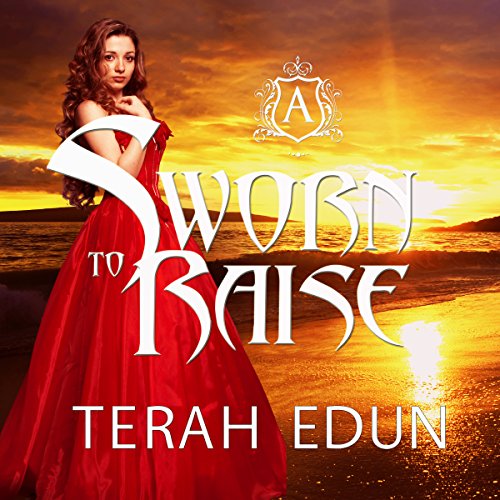 By: Terah Edun
Narrated by: Ashley Arnold
Try for £0.00

Seventeen-year-old Ciardis has grown up in poverty, a cleaner in a small vale on the outskirts of the empire. But beneath her empire's seemingly idyllic surface lies a hidden secret. Whispers of an inept crown Prince are growing ever louder - intensified by the five-year anniversary of the soulbond initiations.

Amidst scandalous whispers, Ciardis finds herself chosen to train for the Companions Guild. She leaves her home and sets off on a personal journey to become a Court Companion. A position she'd never thought possible for a lowly servant to obtain, she must prove that she has the skills to attract a Patron.

But she must master those skills quickly. If the legends are true, only Ciardis can harness the power to raise a Prince in an Imperial Court sworn to bring him down.

What listeners say about Sworn to Raise

It took me sometime to get used to the narrator, who gave the girls rather silly voices and emphasised inappropriate words (IMO). The plot was a bit drawn out by misunderstandings. Also, there were only a few even mildly likeable characters, except the heroin who was a bit too nice.

On the other hand, I did enjoy it!

Actually I listened to this book on Audible and I only read along about 2/3 of the time. I give the Audible 1-2 stars. First of course is the snotty, whinney voices the narrator assigned to everyone. She gave dialog the most unpleasant interpretations and made it unpleasnt to listen to. Worse than attitude was illiteracy. During the portion of the book I read along with I found more than 80 times when the narrator either mispronounced words, read the wrong word entirely, skipped words or added words. Sometimes there were as many as 3 unique errors on one page. Foals became fowls, poisons became potions, turned became took impassive became impressive. These are only a few of the misread words. Everyone makes a mistake here and there but his woman is extremely deficient in her basic reading skills and there apparently was no quality control done.

In addition to the narrative problems there a several incidents when words and as much as a couple of sentences are cut out of the recording entirely. (On the Kindle App)

Is it over yet?

At this point I am just looking for the end. This is obviously not my type of book. It is boring and there really isn't any great story here. Poor orphan girl who is secretly someone important gets whisked away to a better life. Oh the drama. Yuck. The narration is slow and boring too, the narrator offers no inflection or personality to the characters. She sounds like a robot reading an instruction manual. Actually it probably is a perfect description of the characters personality and depth.

good with potential to be great

kinda weird. I wish there were a clearer definition of a companion. is it like a concubine/mistress with powers? is being a "mistress" optional for all companions? also, companions and wives sound nearly identical. what is the difference? story has potential, I just think these terms should be more clearly defined. also, it felt kinda short for an audiobook.

This is a entertaining story but I am going to have to finish the series on kindle due to the cringeworthy narration. I strongly suggest sampling the audio to see if you can handle the narrator.

I didn't care for the performance.

Where does Sworn to Raise rank among all the audiobooks you’ve listened to so far?

Good story line, hopefully the next book will have a different reader. If not, I won't be buying it.

I enjoyed the story but the reader read like she was reading to grade school children.

I did not get this book finish because I just totally lost interest in the story. I had no attachment to the characters at all.