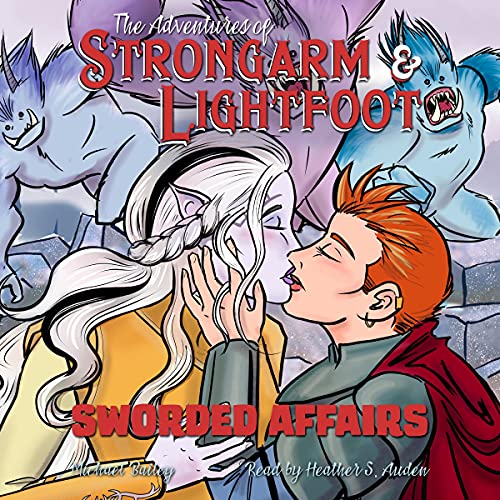 By: Michael Bailey
Narrated by: Heather S Auden
Try for £0.00

When Derek Strongarm, Felix Lightfoot, and their friends are hired to transport a powerful and potentially dangerous magical artifact, they can’t help but foresee disaster ahead. They have a rather bad track record, after all. Why should this job prove easier than any other?

Their pessimism is rewarded in spades when they become trapped for the winter in Além, a fortified city under siege by howlers - savage beasts living in the surrounding forest and hungry for human flesh. Unhappy with the prospect of getting eaten alive by the ravenous monsters, the company offers its services to the city guard and its commander, Briana Dohnington, to help safeguard Além.

When Erika finds an unexpected source of warmth in the arms of Commander Dohnington - much to the dismay of her brother, Lord Gregor Dohnington - she winds up in the middle of a political scandal that could throw Além into chaos for generations to come.

But that proves the least of Erika’s worries when the howlers come knocking on the city’s front gate in search of a hot meal - and the people of Além are on the menu.

What listeners say about Sworded Affairs

I was enthralled with the latest adventures of Derek Strongarm, Felix Lightfoot, and all their friends. I have been waiting for this installment and consumed it voraciously. I found the second half of the book especially impactful given the restrictions we have had to live under through 2020 and well into 2021. This audiobook coming out now has allowed our hardy adventurers to be some of the first friends we get to welcome back into our lives as we strive to move back to something resembling normal.

Kudos to our wonderfully talented narrator, and author, for giving us more light to help guide us through the darkness.