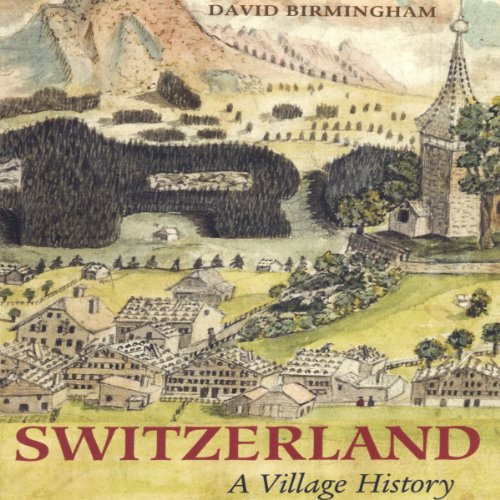 By: David Birmingham
Narrated by: Ayn Czubas
Try for £0.00

Switzerland is a remarkable country, half of whose territory lies in the Alps. This is the history of one Swiss alpine village. Raising cattle and making cheese brought modest wealth to its struggling peasants until a destructive Napoleonic invasion brought revolution and poverty. Well-being was slowly restored by a democratic unification of Switzerland. The Alps took on a romantic tourist glow in the Edwardian age and after the disruptions of two world wars the highland farmers and guest house keeps began to prosper.

The book is published by Ohio University Press and Swallow Press.

“An enthralling picture of the locality in its broader Swiss and international context. Birmingham's mastery of the minutiae is coupled with an experienced understanding of the development of rural societies and of the complicated cultural, linguistic and political mix which was and is Switzerland. Vivid and delightful.” ( English Historical Review)

A lovely account of Swiss history, which skilfully weaves many centuries of events. The only drawback is the robotic narration. Aside from the monotony, the automated voice regularly mispronounces non-English words. “Huguenot” with a hard “T” is probably the most egregious example.

Sadly the good and comprehensive story of a man to life was ruined by the awful narrator. When there are so many people who actually know how to pronounce the Mountain words, towns families and areas, why oh why did you choose someone who has absolutely no idea how to pronounce anything. He did not even know how to pronounce A range of good English vocabulary the author used.
His narrative ability made it very difficult for me to enjoy the book. I do have to add that I do live in the mountains about 10 minutes away from Château d'Oex. Very sad.

I purchased this book because I recently discovered my Swiss heritage. I listened to this book before bed most nights and helped me fall asleep quickly. Not saying it was boring but easy to fade in and out of and come back to. The time line was impressive and didn't stick to just one era.

Could have been better very easily

Disappointing. Narration sounded like a non-native speaker, over pronouncing some words and completely mispronouncing others.
Interesting content, but some major slip-ups concerning things I do know make me wonder about the accuracy of things I knew less well, "The American invasion of France in 1944"? Really? Major loss of credibility with that statement.

Cultural & historical details are interesting, especially since I have been to and loved Chateau d’Oex.

Robotic narration makes this a slog, as well as too much attention on unimportant details, such as how much butter a certain person bought on a certain day in a certain year for a certain price; or a slowly, detailed account of a regiment that marched through the valley (I.e. 24 dragoons, 2 drummer boys, 4 oxen, 5 wagons, etc) or an accounting of exactly what was lost in a fire.

Book could possibly be cut in half. Might be good if you have a case of insomnia. Don’t recommend driving while listening.

Great background to hiking in The alps

Terrific for learning about specifics of life,arts,economics and politics of a alp village. Should be required listening for people traveling/hiking in the Swiss alps. A robotic reading is somewhat useful because the book features efficient writing that is not bogged down by extraneous details. I wish there was a book like this for every region of the world. It would really allow for much more fascinating travel experiences. As well as allowing new residents to understand a regions history and culture.