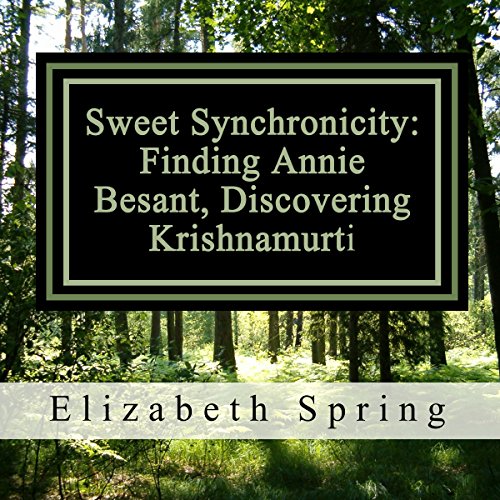 Like the film Julie and Julia, this book is a true story based on the lives of two women who lived at different times and places but who had uniquely intertwined lives. Elizabeth Spring, astrologer and aspiring writer, finds Annie Besant because of unusual similarities in their astrology charts. Annie is a woman who's been lost in history - a woman who was a passionate social reformer and who was declared "an unfit mother" and lost custody of her children because of distributing information on birth control in 1875. After trials and depression, Annie becomes a passionate spiritual seeker; being mentored by the Russian psychic Madame Blavatsky, head of the Theosophical Society. As Elizabeth struggles to write a screenplay of Annie's life she discovers the heartfelt and obsessive story of Annie's adopted son, the young mystic J. Krishnamurti, and the occultist, Charles Leadbeater. Elizabeth questions the role of fate and reincarnation in her own life by what she uncovers about her mysterious relationship with Annie who was born exactly 100 years earlier, in Victorian England in 1847.

What listeners say about Sweet Synchronicity

my interest is in Krishnamurti and the teachings so there are some informative details and a colorful storyline. Overall I enjoyed although I found the narrative voice a tad jarring - sounds a bit childlike and simpering for a grown woman.