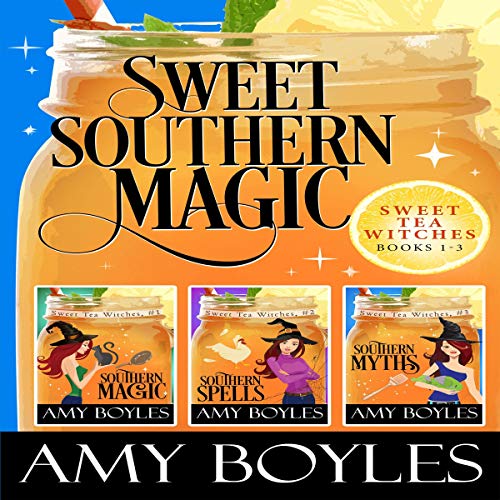 By: Amy Boyles
Narrated by: Hollis McCarthy
Try for £0.00

It only takes a second for life to go to heck-in-a-hand basket! In less than 24 hours, Pepper Dunn loses her job, her boyfriend, and her home. It's the worst day of her life.

But when Pepper discovers she’s a witch and has inherited the most important store in the magical town of Magnolia Cove, Alabama, she’s as happy as a pig in mud. Too bad the shop is a familiar pet store and Pepper doesn’t like animals - not even a teensy bit.

Determined to sell the shop and get the heck out of town, Pepper’s plans go haywire when a local storeowner winds up dead and Pepper gets accused of murder. Thrust into a magical mystery, Pepper teams up with a mysterious private detective and a cat so traumatized by the murder that she’s not talking - and that cat could hold the key to Pepper’s innocence.

Now, Pepper must avoid trouble, solve the mystery, and placate her new grandmother, who keeps a strict 10 p.m. curfew that’s enforced by the talking end of her shotgun.

Sounds like a simple day in the life - as if. Can Pepper solve the mystery? Or will she become the next victim of the Magnolia Cove murderer? And most importantly, will Pepper learn to love the animals she’s in charge of?

All Pepper Dunn wants is a quiet life in the witchy town of Magnolia Cove, Alabama. But when the Cotton and Cobwebs Festival arrives, her dream goes up in smoke. This year, grandmother Betty is determined to win the award for best magical creature against Melbalean Mayes, the contest matron. To win, Betty needs Pepper’s help.

But when Melbalean winds up dead and Betty is accused of the murder, Pepper is thrust into one role she never expected: She must complete a list of chores that keeps her town running.

Pepper has her hands full - she must ensure the safety of her town, try to clear Betty’s name, and make sure no one else winds up a victim of the Magnolia Cove murderer. Can she do it? Or will she become the next victim?

Just when Pepper Dunn starts accepting her ability to communicate with animals, she’s thrown for a loop - an egg containing a baby dragon winds up on her doorstep.

Convinced the creature will grow up to become a destructive force of nature, Pepper gives the dragon to the first person interested in buying - a traveling magician named Mysterio, who claims he can communicate with the dead.

Relieved to be free of the creature, Pepper’s world turns upside down when Mysterio reveals that he has a message for Pepper from her dead mother. Pepper can’t wait to discover what it is. But before she has a chance to find out, Mysterio is murdered.

Left with a set of clues, Pepper is determined to discover the information her mother wanted her to know. But will untangling the mess of clues lead Pepper on the right path, or will it lead her straight into the hands of the murderer?

Find out now! Buy the audiobook.

An interesting coming of age Witchy paranormal cozy. (Note, I've listened to the first of three stories so far).

The author captures southern charm of a damsel in distress, accused of murder, after finding a town full of family she didn't know she had. A town complete with talking animals, and other furry friends.

I did find the plot transparent at times, and some of the questions I wanted answered were set up as long-term engagements, to be revealed slowly, like the aroma of a pan of Grandma Betty's Sweet Potato Pie seeping into the air of the kitchen.

The other two stories in this bundle are on my must listen list, thanks in part to the fun and engaging narration. Hollis does a fine southern accent (at least to my Yankee ears). I can picture the text flowing by as she not only reads it, but finds ways to bring it to life.

Character voices are gendered appropriately, and just different enough to discernible without going nuts trying too hard to make every character unique. The author uses dialog tags and action beats to aid the narrator in this. It's easy throughout the story to know which character is speaking without straining the repertoire of the narrator.

This is books 1-3 of the Sweet Southern Magic cozy mystery series. They are all nice light hearted mysteries of Summer's first year of becoming a witch and moving to magical/mystical town full of witches of all sorts! A very read! 😍

i love these stories!!!!

good books to listen to while cleaning the house. can't to get the other books.

the storyline and writing of this author pick you fully engaged through the entire storyline. the reading by Hollis McCarthy is very engaging and witty.