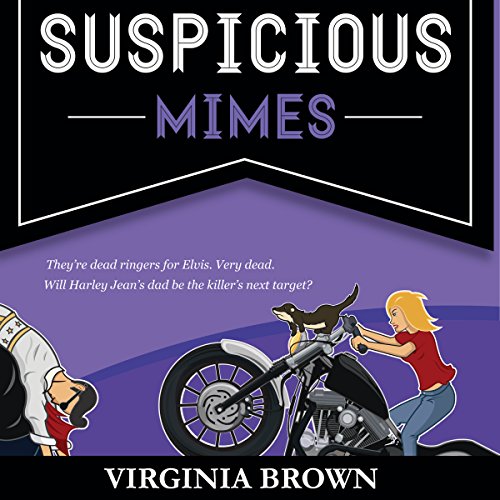 The Elvis impersonators were dead ringers for the King. Very dead.

Harley Jean Davidson's job as a Memphis tour guide is about to get even stranger than usual.

He didn't respond, just remained in his seat on the bus, staring out the window. Maybe he'd gotten cold feet about the Elvis contest. With a sigh, Harley walked to the back.

"Hey, buddy," she said when she reached his seat, "we're here. Time to go on stage and sing your heart out. Knock 'em dead."

When he still didn't respond, Harley put a hand on his shoulder to give him a slight shake. He slumped forward, his head hit the back of the seat in front of him, and she jumped into the aisle. The hilt of a knife protruded from his back. She froze. This couldn't be happening. Not to him, not to her, again.

She leaned closer, and the rusty smell of blood made her stomach lurch. Backing slowly away, she fumbled at her waist for the cell phone that she now kept tethered to her with a chain, and hit speed dial. The police dispatcher answered quickly.

"Nine-one-one?" Harley said in a voice that sounded a lot calmer than she felt. "We have another dead Elvis."

Virginia Brown is the author of more than 50 novels, including the best-selling Dixie Divas Mysteries and now, the Blue Suede Memphis Mysteries, starring Harley Jean Davidson. Look for new books in both series, coming in 2012 and 2013.

What listeners say about Suspicious Mimes

Is the king really dead?

I enjoyed this book. This is book three in the series and I can say they have all been stand alone books and you don't need to have read them in order to enjoy. The characters are colourful and quirky, even the pets aren't normal, which makes the series so much fun and enjoyable. I did learn more than I ever wanted to know about Elvis but it worked well, especially with the series being set in Memphis and who can set a series there without having him feature heavily in at least one book. The mystery was good and kept you guessing. I did wonder how many times somebody could get kidnapped or attacked without ending up dead, although I did enjoy a few of the rescue attempts, especially the one involving her Gran or the pets. All in all this book is good for a laugh and a fun way to lose yourself for a few hours.
Harley is gearing up for the busiest time of the year as a tour guide. The anniversary of Elvis death, where hundreds of Elvis impersonators descend of Memphis and when the city holds a talent competition, one that Harley's own dad enters every year. This year is going to be different though because some one is killing off the king on the tour busses. Harley finds the first victim and gets dragged into the investigation against the wishes of her boyfriend and childhood friend, who both want her to stay out of it. The killer has other plan though because she soon becomes a target, even though she never has or never will dress as the king. Is the killer targeting the competition because he wants to win or is it the bus tour company? Harley and Tootsie will have to figure it out if they want the company to stay in business because finding that many bodies on the busses is greatly affecting the bottom line. Harley also has to worry about her Dad, could he be a target? And what about herself? Even moving in with her Gran in a retirement home can't keep her safe. If only she could stop finding dead bodies, all would be right in her world and her spirit guides could say In Las Vegas.
The author uses two narrator's for the book, a male and female. I did think the male of the team did let the side down a bit because all the men sounded the same or to deep for the character, although I did think he got Tooties right.
I was given this free review copy audiobook at my request from audiobooksunleashed and have voluntarily left this review.

Loved this book from start to finish great storyline
I was given this free review copy audiobook at my request and have voluntarily left this review.

It had many funny incidents,

What about Karen Commins and Drew Commins ’s performance did you like?

They are both very good readers.

is more than one elvis elvi?

This audiobook is very funny. She manages to make the outlandish situations plausible enough to be laughable. It was a good mystery read as well. I enjoyed it.

Another great in this series

Elvis personators hmmm, killing them? Why? That's just what Harley has to find out. I enjoyed this book as well as the others. Well written and narrated. I was given this free review copy audiobook at my request and have voluntarily left this review.

Love this series and the characters! Great mystery with LOL moments for sure!


Despite previous complaints of Harley going into danger for no valid reason, I keep coming back to these books. This book had more valid reasons than the first two at least, but this behaviour remains a huge turn-off for me.

They are easy to listen to, and I want to know what happens to her. I’m moving on to book 4. I like her and her surrounding characters enough to plug my ears and go “la la la” when she yet again does something kinda stupid or even endangering to her friends and to cops.

The male narrator is disappointing in that his male voices are starting to all blend into a version of the one he uses for Mike, one that was unique and limited to Mike in book one.

Couldn't even get past the first chapter

I found the narration to be difficult to listen to, accents annoying.

What could Virginia Brown have done to make this a more enjoyable book for you?

It had potential as a story line and that was what drew me to it but other than the first paragraph it couldn't hold my interest.

What didn’t you like about Karen Commins and Drew Commins ’s performance?

What character would you cut from Suspicious Mimes?

Didn't listen to it enough to identify one.