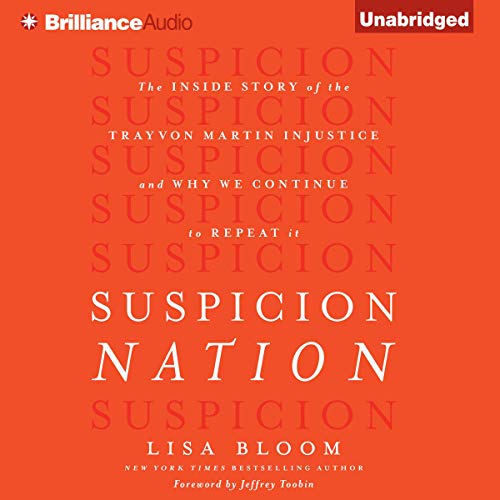 A provocative examination of race, gun laws, and violence that exposes how the state of Florida bungled the Trayvon Martin case through new interviews and revelations about the trial.

Many thought the election of our first African-American president put an end to the conversation about race in this country, and that America had moved into a post-racial era of equality. Then, on the night of February 26, 2012, a black 17-year-old boy walking to a friend’s home carrying only his cell phone, candy, and a fruit drink was shot and killed by a neighborhood watch coordinator.

The public, especially African-American journalists and activists, clamored for the media to pay attention to the killing of Trayvon Martin by George Zimmerman. The July 2013 trial of Zimmerman for murder captivated the nation, as did his eventual and shocking acquittal. Any belief that we lived in a post-racial America was shattered.

In her provocative and landmark audiobook Suspicion Nation, Lisa Bloom, who covered the trial from gavel to gavel, posits that none of this was a surprise: Our laws, culture, and blind spots created the conditions that led to Trayvon Martin’s death and made George Zimmerman’s acquittal by far the most likely outcome. A trial lawyer herself, Bloom details how the "winnable case was lost" through new in-depth interviews of key trial participants. The only nonwhite juror tells her story of loneliness and isolation during the trial. The state’s medical examiner describes a scientific theory he wanted to raise during his testimony but could not. Rachel Jeantel, the state’s star witness and the last person to speak to Trayvon Martin, reveals how poorly the state prepared her to testify and what went through her mind when she was on the stand. And a new examination of Trayvon’s school suspensions raises troubling questions about racial profiling against the teenager at his own high school.

And the injustice continues, as more shootings, especially of unarmed African Americans, plague our nation. Gun rights have been expanded to surreal extremes, as the U.S. has the highest per capita gun ownership rate in the world and more gun deaths than any other developed country. Despite the strides America has made, racial inequality persists in employment, housing, education, the media, and most institutions. And perhaps most destructively of all, racial biases run deep in every phase of our criminal justice system.

The Trayvon Martin case was iconic. It forced the country to stare unflinchingly into a family’s grief and the biases of a nation that created the conditions for it. Suspicion Nation expertly captures the state of a country conflicted not only about the Trayvon Martin injustice but divided over issues of race, violence, and gun legislation.

What listeners say about Suspicion Nation

Very Good Story but too much anti-gun politics

The story of Trayvon was interesting and presented some compelling reason why George Zimmerman was acquitted. The Author, however, took too much time telling the readers how she would have handled the case thereby changing the outcome. There was a lot of anti-gun and gun control politics in the last few chapters that ruined the book for me. The story could have been told more matter of factly and with less pontificating and politicizing

I think the conclusions of this book have to be reevaluated, now that people are openly proud to flaunt their white supremacism and large numbers of government officials agree with them.

The definitive story behind the murder of Trayvon Martin

This story dissects the trial of George Zimmerman and how through the incompetence of the states attorney’s office a murder escaped conviction and justice was denied the Martin family. After listening to this book you will see beyond a reasonable doubt that Trayvon was stalked, accosted, assaulted, murdered, and character assassinated by a right wing media with a racist agenda. This was an amazing piece of investigative journalism that took a painstakingly detailed look at all of the evidence and testimony to arrive at the undeniable truth which is a murderer walked free.

I thoroughly enjoyed this book! It is both informative and timely, on a topic that needs to be addressed more openly.