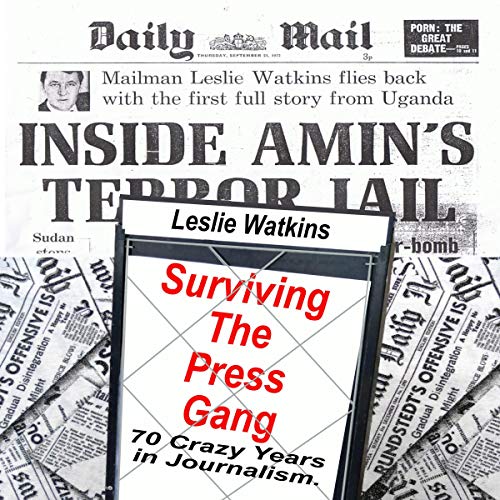 From humble junior reporter on the Luton News to globe-trotting feature writer for the Daily Mail and a sometime television executive - this is Leslie Watkins - Les to his friends - reporting the news over 70 years. He tells of Fleet Street in its heyday revealing what went on inside the newspaper world, of scoop after scoop, fake news, murder, and political corruption. Honest, humorous, surprising, and sometimes tragic his journalist's eye view of the world, of breaking news, drink fuelled editorial feuds, and dirty tricks lifts the lid on journalism's golden age.

But journalism isn't all fun and games, scoops and interviews. Sometime journalist becomes part of a story that's making the news.

"At 20 minutes past three in the afternoon the haggard man knew he was about to die. That was when he saw the guard coming across the dusty yard with the iron headed mallet. The soldiers dragged him to the middle of the yard, where the concrete was stained with the blood of yesterday. For a brief instant he glimpsed the blue of the sky - the tranquil and almost blue of eternity. Then the head of that terrible mallet was arcing down towards his face. His death scream was still hanging in the air when the flies started swarming hungrily in his brain."

Words written by Les after he was released from Kampala Jail and deported by african dictator Idi Amin's evil regime. From being Father Christmas in London's Selfridges to exploring Asian brothels, interviewing politicians such as Margaret Thatcher and 13-year-old drug smuggler Tim Davey incarcerated in an Istanbul prison, the story of his assignments lays bare the human side of the men charged with getting the story .

What listeners say about Surviving the Press-Gang