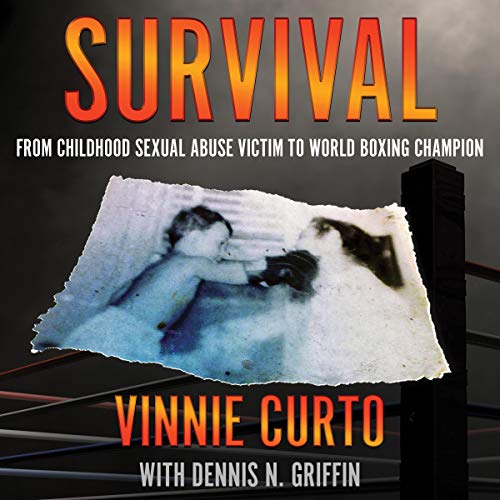 By: Vinnie Curto,Dennis N. Griffin
Narrated by: Jeffrey A. Hering
Try for £0.00

Vinnie Curto was born in East Boston, Massachusetts, on July 10, 1955. His father Jimmy Curto was a raving, sick, alcoholic homosexual. Vinnie’s father and his drunken friends sexually abused young Vinnie, frequently raping him and performing other deviant sexual acts on him, while his mother Loretta stood by and let it happen.

When Vinnie was 14, his father forced him to pursue a boxing career. Jimmy Curto told his son that the only way he could ever be proud of him is if he won a boxing championship. He said if Vinnie failed in that, his only other alternative would be to commit suicide. To make his point, Jimmy produced a handgun and made Vinnie hold it in his hands. It is a memory that has haunted Vinnie for years.

To escape his living hell at home, at the age of 16, Vinnie lied about his age and joined the Navy. Although the falsification of his age was later discovered and he was discharged, while serving, he joined the boxing team and made many contacts that would benefit his career in the future.

Vinnie’s decision to join the Navy not only altered his life, it may very well have saved it. After his stint in the military, Vinnie joined the Olympic boxing team, where he made several more valuable contacts, including the legendary trainer Angelo Dundee.

The doors to his future were being opened. However, his road to a title fight would be long and paved with danger.

What listeners say about Survival

Horrifying. Life affirming. That is how I would describe this book. There are two sides to Vinnie Curto's life - the horrific circumstances of abuse he suffered at the hands of his family, and the life affirming path he made for himself through sports.The depictions of abuse are graphic, and I had to skip one chapter. At times I suspected him of self-promotion or glossing over problems he caused but by the end of the book I had no doubt of the truth of his good works outside the ring.
I received this book free of charge in exchange for an unbiased review.