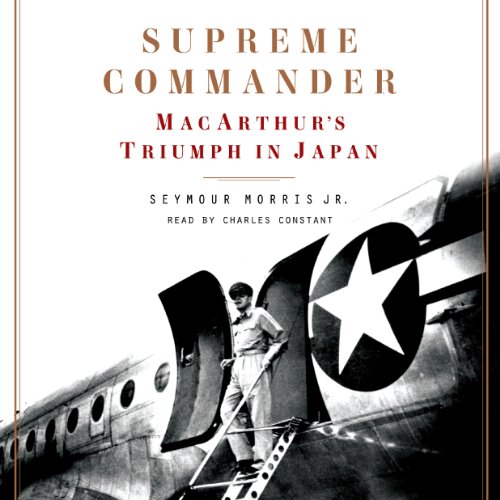 He is the most-decorated general in American history - and the only five-star general to receive the Medal of Honor. Yet Douglas MacArthur’s greatest victory was not in war but in peace.

As the uniquely titled Supreme Commander for the Allied Powers, he was charged with transforming a defeated, militarist empire into a beacon of peace and democracy - "the greatest gamble ever attempted", he called it. A career military man, MacArthur had no experience in politics, diplomacy, or economics. A vain, reclusive, and self-centered man, his many enemies in Washington thought he was a flaming peacock, and few, including President Harry Truman’s closest advisors, gave him a chance of succeeding. Yet MacArthur did so brilliantly, defying timetables and expectations.

Supreme Commander tells for the first time, the story of how MacArthur’s leadership achieved a nation-building success that had never been attempted before - and never replicated since. Seymour Morris, Jr., reveals this flawed man at his best who treated a defeated enemy with respect; who made informed and thoughtful decisions yet could be brash and stubborn when necessary, and who lead the Occupation with intelligence, class, and compassion.

Morris analyzes MacArthur’s key tactical choices, explaining how each contributed to his accomplishment, and paints a detailed picture of a true patriot - a man of conviction who proved to be an outstanding and effective leader in the most extraordinary circumstances.

What listeners say about Supreme Commander

Compelling book in an pleasant voice

What made the experience of listening to Supreme Commander the most enjoyable?

Even if not all the facts are correct, as stated by a reviewer on Amazon.com, this is a compelling read. It is an evenly paced, extremely well written story that obviously needed (re)telling, as MacArthur's astounding achievements in Japan are today largely forgotten. My knowledge about MacArthur, gleaned from reading about the Pacific theater, was of an accomplished general, but a flawed, vain and self-centered man. This book changed my perception about him completely. I certainly am going to read more about MacArthur and I hope I can find more biographers like Mr. Morris, who give MacArthur the credit he is due.

The reader did his job very well. He has a very pleasant voice, not much of an accent and a tempo that suited me fine. I hate overbearing, brass voices, with heavy American accents.

Would you try another book from Seymour Morris and/or Charles Constant?

Its non-fiction, but I would have put in more human interest stories rather than broader policy debates and discussions.

Still, there is plenty of human interest and its gripping.

Its an interesting story well told. But its worship of MacArthur gets monotonous. After all, he was a man, and had his flaws. For instance, the decision to sweep war crimes under the carpet was hugely significant. The book largely veers away from discussing the graphic details of those crimes, as well as how the perpetrators got away.

It does discuss the commander of Unit 731, but largely in the context of how MacArthur had no choice but to let him off scot free.

Did Supreme Commander inspire you to do anything?

This was an excellent book; well researched and was written in a very balanced manner. With General Mac, from my previous research, the authors either loved him or hated him and texts were written accordingly. This book has to go down as the most balanced I have read to date.

MacArthur never lived near the sea, we are told by Morris, even though he lived in Manilla (a port city). The US advance in Korea stalled out near the 38th, we are told, even though it was had plenty of momentum when it stopped voluntarily north of the parallel. The subject matter is fascinating, but the slipshod research makes me question the entire work.

Great story about a very complex man and nation. Author glosses over a few warts on both but stays pretty close to the truth.

Douglas MacArthur was one of the greatest and most fascinating war leaders America every produced, I think the only General to be awarded the Congressional Medal of Honor. But as this book shows, MacArthur also excelled in his peacetime achievements. Almost no one expected that the bushido culture of Japan, steeped in militarism, could be turned around. Yet MacArthur did it. Morris's book also tells a lot about economics and politics, relating how MacArthur set the nation on a course to prosperity and democracy.

The book is excellently narrated by Charles Constant. He has done other WWII histories, and has become a world-class vocal chronicler. I enjoy how he paces his story, and how his voice inflections can be grim, enthusiastic, momentous -- whatever is called for by the material. He's an extremely versatile narrator. Constant is becoming my first choice for voice acting of serious works.

There are historical errors in Morris's book. My major quibble is that he doesn't take MacArthur to task for his treatment of General Yamashita, who was convicted of war crimes and executed. MacArthur pushed hard for Yamashita's execution. The verdict was appealed to him, and he refused to reduce it, even though it was clearly established that Yamashita was not responsible for the Phillipine atrocities. It was his subordinates who committed the Manila and other atrocities, in direct contravention of Yamashita's orders. For a very good recounting of this incident, and the flaw in MacArthur's character, read James Webb's "The Emperor's General".

Overall, this book is interesting and informative. And the narration is excellent.