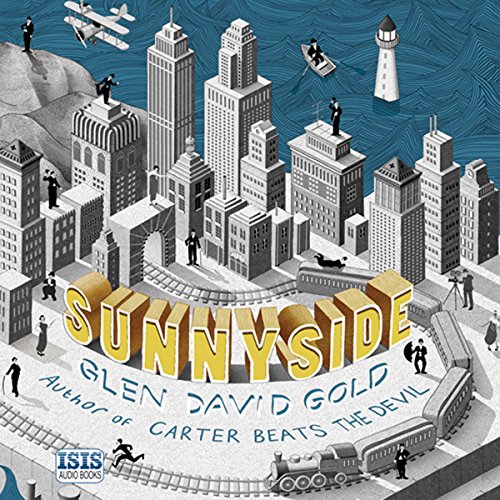 On a winter's day in 1916, Charlie Chaplin is spotted in over 800 places simultaneously - an extraordinary mass delusion in an America desperate for distraction from the oncoming war. From there, Sunnyside follows the overlapping fortunes of Leland Wheeler, son of the world's last (and worst) Wild West star, as he heads to the battlefields of France; snobbish Hugo Black, drafted to fight under the British General Ironside in Siberia in the Allies' doomed attack on the Bolsheviks; and Chaplin himself, facing a tightening net of complications - studio moguls, questions about his patriotism, his wayward heart, and most menacing of all, his mother - that stand in the way of his finally making a movie to match his talents.

What listeners say about Sunnyside

Not as good as Carter Beats the Devil but ok

I loved Carter Beats The Devil - I felt though that this, his second book, was unnecessarily long and did tend to ramble in parts- the history aspect of it was truly fascinating though and I'm glad I read it - its a long old listen at 25 hours! Jeff Harding's narration was, as usual excellent although I was most surprised to hear Jeff let out a mighty belch and then simply repeat the previous sentence as though nothing had happened - I'm sure it must just have been overlooked during the editing but it goes to show that we are all human (Its at around 5 hours 53 mins in on the third section)

I'd decided to embark on a campaign of "follow-ups to debuts I'd enjoyed where maybe critical success hadn't followed".
First up was Ready Player One's sequel Armada. Wasn't as good, but was enjoyable enough.
Then This. This I hated. I've given it a few hours and for the first time ever I'm calling it as a book I won't finish. First ever.
Not a technical issue, narration is fine, it's just a "bad book". Actually, don't even think that covers it. I've normally no issue sticking with something just to get to the end, here though I don't even care where the end is. I've no interest in finding out where the plot goes and I've definitely no interest in listening to the f'in prose.

3 richly drawn characters, 3 arcs all complete within themselves and oddly relatably unrelated.