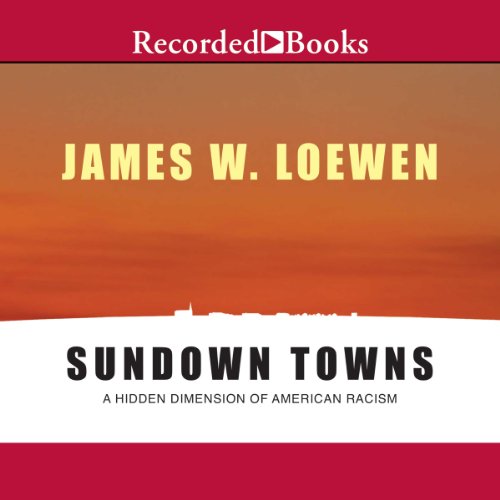 Sundown Towns examines thousands of all-white American towns that were - and still are, in some instances - racially exclusive by design.

Professor emeritus at the University of Vermont, James W. Loewen won the National Book Award for his New York Times best seller Lies My Teacher Told Me: Everything Your American History Textbook Got Wrong.

"Deserves to become an instant classic in the fields of American race relations, urban studies and cultural geography." ( Washington Post Book World)
"Sure to become a landmark in several fields and a sure bet among Loewen's many fans." ( Publishers Weekly)

I was interested in this book, having read another James Loewen book. However, this needs some serious editing to make it something you can finish. I must confess to having got bored with it, and considering the serious point he is making that doesn't make me feel good about myself.

Sometimes you can make a better point by highlighting typical examples, rather than just endless lists. This takes away from the tragic nature of the way non whites have been treated in the USA of the past (and how this impacts the present and future). It is like listening to a lecture from your dad who just keeps saying 'and another thing'

As I haven't managed to get past the first few chapters I may have to eat my words if I ever get to the end of the book. Given the serious subject matter I feel awful giving this such a low rating. It is something you feel you should know about but do they have to make it so dull?

This book was a meticulous study into how blacks were treated in the north after about the 1890's when much of the gains made after emancipation began to reverse themselves and blacks, although free, found themselves in encreasinly hostile territory as a result of white backlash. Primary documents along with first hand accounts of whites living during the time solidify the authors claims. It would be better to listen to this along with the actual book inorder that one may refer to the extensive notes that are not in the audio version.

This book is inportant in that it helps us remember exactly how racist we were and may still be. Many people have a cartoonish view of what racism is, that it must be overt and blatant to qualify. However, although racism was quite overt in the period covered in this book, one can see how racism became more covert and subtle in recent times and how it hides in the structural and institutional realities today.

A book not for the faint of heart.

This is perhaps the best oral account and history of American racial shame. From former presidents to the American businesses, Loewen exposed the U.S. for atonement. This audiotape will make modern day racists look more like holocaust denials. Throughtout this audiotape, Loewen used facts, not assumption to buttress his objective point of views.

Sundown Towns is a must read for anyone--both Whites, Blacks, Hispanics, Asians, and Native Americans who are seeking self-liberation.

This tape will make you cry, and proud at the same time. We (as Americans) have a long way to go.

How we lost the Civil War in the 1890's and beyond

As much as some people would wish that American history is a story of how good we have become, there is still much work that needs to be done to bring about a society that lives up to its credo that all men (and women) are created equal. It is only by courageously facing the evil that has been done can we truly create a society with equality of opportunity.

I read a lot (thanks Audible!) and I have many books I have recommended because they were informative and surprising, many because they were simply entertaining, but I have rarely called a book "important". This one is.

FIrst, I studied history in school and yet I had never heard of this pervasive and systemic history of racism in America. The thousands of towns and whole counties that Mr. Loewen uncovers and discusses is staggering. I never thought of the overwhelmingly white towns and suburbs I have traveled through in my life as having a history of being "all white on purpose", but I have been to some of the places he discusses. On top of that, his research is impeccable and the stories of violence, arson, lynchings and non-violent attempts to drive whole groups of people from whole areas of our country is staggering. To this day we live in a world shaped by the policies of these Sundown Towns. And we don't even know it.

Secondly, he does not just make a case for the history of these events and he doesn't just examine how they existed and spread throughout mostly the NORTH of our country, he also strongly links this history of racism to effects in our daily lives TODAY. The overall socio-economic disparity of blacks versus whites in this country can be connected to these sundown towns. Their homogeneity relates to their continued segregation and prejudice. There is little more important in life than where you live (it relates to job opportunities, schooling for your children, social status, safety, crime and overall health).

This book will change the way you view your own town, not to mention our country. It will ALSO affect how you think of current events. Consider this: he links how Sundown Towns and the White Flight of white people into homogenous suburbs (the vast majority of which were established to be or were quickly changed to be "all white on purpose) evolved into the modern gated community - which are mostly white. After this book was published George Zimmerman shot Trayvon Martin in a gated community. When I look at the unfolding news about this attack and the undercurrent of racism it implies I can't help but think that this would never have happened if there was not a history in this country of creating Sundown Towns and thus segregated gated communities. Again, this is my interpretation of events, not Mr. Loewen's (as the book was published BEFORE the shooting) but I think the two are connected.

The narration is strong and the text can be a bit factually dense. But in the end this book will redefine history and current sociology for you. I cannot recommend this book enough.

A must read for all Americans

If you're a lover of truth and a history buff, big on race relations or have ever asked the question "how did we get here?" This book has insurmountable insight. should be mandatory elementary, middle and high school reading. As the only black family in a sundown town in Ohio I thought my experience was shared by all I then found that it wasnt shared by all but this book showed me it may have been shared by many. It's a unique perspective with genuine research that only a white person could have done and I appreciate all the labor that must have went into it. In short this is a MUST READ!!!

I really enjoyed this book. A lot of the information told in this book was brand new to me. It explains in detail why some cities were and still so divided.

This book was a real eye-opener. A social history and study of Sundown towns, what they truly are, and how they have become so racially segregated. Reading it made me sick- with the practice and with myself, for not standing up to it. Steeped in it, I did not like it, but never did anything about it. I am ashamed of that.

My father was a carpenter, and we moved back and forth from the Chicago area to north central Arkansas with the trades. In 1956 or 1957, my dad showed me a sign at the county line that said, &quot;nigger, don't let the sun set on your head&quot;. It was a word I had never heard him say, and I could tell that he found it distasteful.

Another time that we lived in northern Arkansas, we tolerated verbal attacks, and even a rotted deer carcass tossed down our back stairs. We were white, but from the north, so we were treated as &quot;fureigners.&quot; The neighbors made it quite clear that we were no wanted there. I hated it, hated the people who did it, and hated the area in which we lived. I spent high school in the area west of Chicago, a suburban area that bordered the cornfields out west. My parents never made negative comments about other groups of people, but I never really understood why there were only white people around us.

My grandfather lived in Berwyn, Illinois. He was unashamedly racist, and never gave reasons. I never heard about riots or lynchings or threats that drove out people of color, from him or from history classes. My parents talked about the sundown signs later-when I was in my teens, during the civil rights movement- and I naively thought that this entire attitude was in the past, or soon would be.

When I graduated from my all white high school, my parents moved to Arkansas again. As soon as I could, I moved away. It never dawned on me that most of the areas that I lived in throughout my life had skewed populations.

Mr. Loewen's study is compelling and clear, and this book should be a 'must read' for every student. THIS is the side of history that has fostered fights about confederate statues and their value. This study study gives voice to an insidious process that has been going on in our country for far too long. We must face our own racism, bring it out into the light of day, and stop it.

The history of post Restoration racism in North and West as well as South. Ghettos were largely forced on black populations and white only towns persist today!

that ends, thankfully, on hopeful notes with thoughtful ideas for action. I heard things about neighborhoods near my home town that were painful, but I also heard things that help me look at the diversity in my current neighborhood with hope for the future.

Explains why people sometimes live where they do

What other book might you compare Sundown Towns to and why?

Lies My Teacher told Me

This book changed the way I thought about American towns and the geography of race. Loewen's work is phenomenal and a compelling read. Eye-opening and something every American should read.