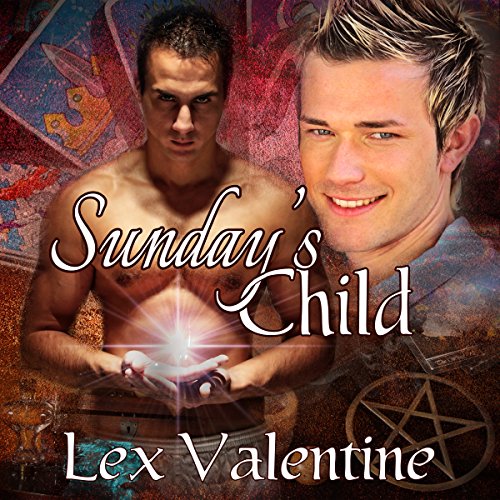 By: Lex Valentine
Narrated by: Chip Wood
Try for £0.00

Bi-sexual wizard Randall Wise is the quintessential good guy. Still single at 30, he's never had a relationship or even a brush with love. Rand is convinced that good guys finish last at love and decides he needs to change if he's ever going to find a mate of his own. Then he looks out his bedroom window to find that the sexiest guy he's ever laid eyes on has moved in next door.

Brendan Thorne is gay, klutzy, and to his thinking, ordinary. At 26, he's got a baby face that makes men treat him as they would an innocent little brother. Determined to at least get laid, Brendan sexes up his appearance and finds his hot new neighbor ready and willing to do the dirty with him. The sex is amazing and both Rand and Brendan sense it's the start of something more. But is it real love or just magic?

What listeners say about Sunday's Child

The story was ok but it would have been so much better if the author had provided more detail surrounding the premise of the story rather then the multitude of sex scenes. As I was listening, I felt like this was a part of another story. Though I will admit that the author attempted to provide the detail in the last 30 minutes of the story, by then I think I had checked out from trying to figure what the heck was going on. Perhaps if I was more familiar with the magical world, I would have had a better understanding of the backstory. Either way, an ok story and I liked the HEA.

Just couldn’t get into it...

I listened the whole way through, but there was just not enough to make me care about the characters or the story. I would say if this is the author’s first time out, then they should keep at it. This actually seemed like a very good short story for a college creative writing course. Even at the end, when an evil entity is about to show up to try to prevent the mating, the cat stays behind and keeps guard so the two can go in the house and mate. Two minute conflict, resolved by telling us it was resolved.

Randall and Brendan are both lonely and not “getting any” with their current “personalities”, so they both decide to try being someone “different” in order to attract a mate. Randall tries to “butch” it up and Brendan decides he might just be a “twink” .
Little do they know that they are actually pre-destined for each other and the reason they’ve been failing at love is that their well-meaning friends have been sabotaging any relationships to keep them single for each other!
When the time is (apparently) right, they meet and hit it off. There are a few lingering doubts, but once they drop the façade, they are a match made in heaven.
There is a little bit of a time issue, if they don’t mate in time, Brendan won’t get all his magic powers and there are forces trying to keep him from obtaining them. Luckily the couple’s friends and family do all they can to shove the pair together in a way that is both sweet and sometimes hilarious.
**
This was a fairly short little story about two mates finding each other. They are really cute together and when they’re trying on their new façades (butch and twink) it’s really funny. The family is really funny, too. (One Uncle acts as Brendan’s feline familiar in order to get the inside scoop!)
There were some plot points that didn’t make sense (like why the friends and family didn’t push the pair together sooner rather than just guard them when it was clear they could tell them their destiny), but overall the story was quick and hot and very enjoyable.
Audio:
Chip Wood did a nice job with all the different characters. He used some great accents (esp. a Scottish one) and his timing was good for the romantic scenes and the humorous scenes.
I enjoyed listening to this light, hot, paranormal story and give both the story and narration a 4 of 5 stars.