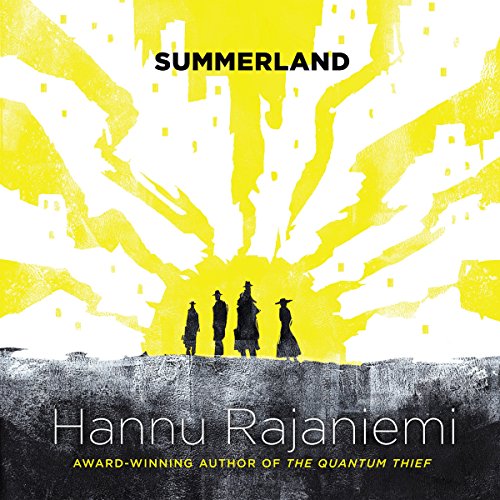 By: Hannu Rajaniemi
Narrated by: Antonia Beamish
Try for £0.00

An awe-inspiring account of the afterlife and what happens when it spills over into the world of the living. The new novel from the most exciting new voice in the genre since Neal Stephenson.

Loss is a thing of the past. Murder is obsolete. Death is just the beginning.

In 1938, death is no longer feared but exploited. Since the discovery of the afterlife, the British Empire has extended its reach into Summerland, a metropolis for the recently deceased.

Yet Britain isn't the only contender for power in this life and the next. The Soviets have spies in Summerland, and the technology to build their own god.

When SIS agent Rachel White gets a lead on one of the Soviet moles, blowing the whistle puts her hard-earned career at risk. The spy has friends in high places, and she will have to go rogue to bring him in.

But how do you catch a man who's already dead?

What listeners say about Summerland

Sure the style is new and interesting, the history twist is fun, but it did not draw me in enough to get past the other problems I had when listening. It came in too many bits and I kept losing my way with the threads and plot. Perhaps if I knew more about the spy genre or history I would understand. But by the end I was just waiting for it to finish. So great ideas as I expected, but I did not get absorbed in the new world enough. This is not enough to put me off another Hannu Rajaniemi book, as I know there will be more great things from this author.

I've read & listened the Quantum Thief multiple times and enjoyed it a lot. I was expecting similar high standard from this book and was gravely disappointed. The characters are paper thin and the 'plot' more plausibly found from a student essay that a book from awarded author.

Narration wasn't completely awful, but not very good either. Really annoying was her habit of emphasizing unusual/special words, which are plenty in Rajaniemi's novel. It broke the illusion of these strange things being normal in the imaginary world of the novel.

Big disappointment after The Quantum Thief

Could not get into this although I listened two thirds of the way. I felt it was a confusion between genres.

Couldn’t engage with this story

The synopsis and reviews made me really want to listen to this book, I could only manage a few chapters sadly as it failed to engage with me on any level, this doesn’t mean others won’t love it and I’m sure many will but it really isn’t to my tastes

Some great world building, a pre WW2 spy drama with a working afterlife and ghosts that can can control willing mediums. This book was fun and left me hoping the author would return to this world again in future novels.

Narration was good other than when narrator lowered their voice to represent whispering, these sections were often inaudible when listening with earbuds.

A good idea you could do more with

Antonia Beamish reads this fantastically. Engaging and passionate and well paced. The story its self is very interesting, it's a great concept and a good story but I think it could be so much more.

An excellent story and well read!

Hannu Rajaniemi is rapidly becoming my favorite author. I look forward to even more stories by him.

A spy story with innovative stakes

Every spy story is about the personal costs of intelligence work. Usually, they're also about the ideological stakes of the cold war or the moral compromises of the war on terror, but Rajaniemi invents a whole new reason to care about these spy games: giving the spies actual tangible souls.

I deeply regret listening to this audiobook

I should have just read it. Hannu's brilliance is entirely smothered by the inexcusably bad audio production. The books volume isn't normalized, the whispers are inaudible and the more raucous characters are painfully loud. Character dialog volume swings so frequently you have to listen with your hand permanently on the volume control.

Rajaniemi is a very creative, articulate, clever and amusing writer. But there are far too many suspensions of my own cosmology standing in my way of appreciating this violent science fantasy story. In our era of easily accessible, accurate information and verifiable facts about non-corporeal experiences, I was taking issue with the most essential givens of the book's stories and plots. So I stopped less than an hour into the book because I found the book's metaphysics to be unnecessarily misleading. That I bought the audio version on a whim meant it wasn't money well-spent. So next time I try out an author's work which is new to me, I'll try the time-honored method of instead glossing a paper copy to see if I might like it.