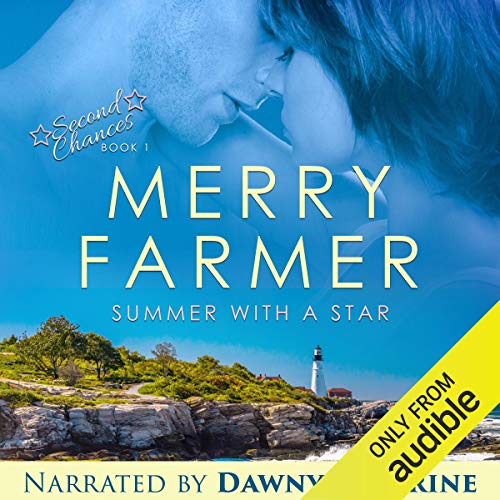 All Tasha Pike has wanted for the past 20 years is to rent Sand Dollar Point for a summer. The grand Victorian on the beach of Summerbury, Maine was the object of her childhood fantasy and her standard of romance - and it was finally happening. Her dream summer is ruined, however, when she arrives in Summerbury to find that Hollywood superstar Spencer Ellis has muscled his way into the house instead. His offer that they share Sand Dollar Point is not only infuriating - it's insulting.

He's a celebrity, and one she's determined to hate.

Spencer's summer in Maine was supposed to help him get his head screwed on straight. One look at Tasha, however, made that impossible. She's beautiful. She's angry. She doesn't care who he is. She doesn't care about his fame. In fact, she doesn't even like him.

What listeners say about Summer with a Star

i found the narrator monitonal the storyline was weak with not much happening. shame really.

I tried very hard. Listened to over half but couldn't force myself to listen to this narrator any longer. There was a latent whine in her voice the entire time. The story line was plausible and entertaining, the narrator's voice made the entire plot unbelievable.

From the very beginning this book turned me off. I did not like the story or the narrator. The main character is a weak and sappy woman. I couldn't get even halfway through.

Struggled to finish because Tasha was so whiny and annoying! I loved the setting and the story itself, but I was put off by the heroine' s continuous irritating dialogue.

Pretty good. I was just tiring of the teacher's angst when the story gratefully ended.

This was a great read and I love the plot and how the characters developed but it was all I could do to listen to the reader. My six year old granddaughter reads with more depth. She has a really grating voice, mispronounced words, and paused in places that threw off the sentences. For example one line she reads:

You haven't changed
The way you see me
One bit

The meter throws off the intensity of the read when done improperly and she needs to listen to people who CAN read before doing any more herself. The story definitely was worth listening to but I will certainly avoid Dawnya's narrations when scoping out future novels.
Claire Bocking, now THERE is a reader!!!! That lady could make the phone book riveting!!! Have Dawnya's listen to her books and she should see what I mean.

Mediocre story with both highs and lows

This was the first book I've read (listened to) by Merry Farmer and I wanted to enjoy finding a new author. However, I had a really hard time warming up to the heroine, Tasha, and it may have been because of the high pitched voice the narrator gave her. In the story, Tasha, a second grade teacher, has just been dumped by her fiancé of 13 years, after realizing that he'd been cheating on her most of that time and he thought it was okay to do that. Since she had been saving for 10+ years to rent the beach house of her dreams in coastal Maine for the summer, she went there to get over the hurt and relax for the summer. She arrives at the house and finds out that it has been rented out from under her to a movie star. He offers to share the big house with her and the story goes on from there. Spence, the star, turns out to be a noble upstanding guy who takes a shine to Tasha, but her self esteem has been so badly wounded that she can't accept that someone of Spence's standing would be interested in her for more than a summer fling.

There were points in the story where I just couldn't stand Tasha, she was such a weak battered down persona. Spence, on the other hand, was worthy of someone better. And Spence's agent was hard to like as well, until the end of the book where she did redeem herself.

The narrator was easy to understand and spoke rather slowly. Her voices, other than Tasha, were fine. When she spoke Tasha's words, it sounded high pitched and fakey. It wasn't worth a full credit, but would be a good purchase for a sale item.

Would you consider the audio edition of Summer with a Star to be better than the print version?

I have these three books in print and enjoyed them. Quick, fun reads. Got the audiobooks on sale and am really glad that I did not pay full price for them. The narration is just such a huge turn off. It takes characters that I actually like and turns them into odd, awkward people with no personality. The tone and fluency of narration are distracting and makes it hard to enjoy the stories.

The narration on this book was so stilted, overly dramatic and the cadence so unnatural, that I did something I have never done on an audio book before; I jumped to the last chapters just to get closure. I also didn't like the wimpy, dithery female character: I got really tired of her angst and whiny lack of self esteem.
Sorry, I don't usually write such negative reviews, but I found myself really disgusted that I had spent money on this book!!

The story isn't bad but the reader is awful. She turns any character into a whiny, pathetic, weak person. A stronger reader would have made the protagonist a less fractured, more resilient, situationally stressed person who the listener could relate too.

The narration was really awful. The story was formula romance and I didn't finish it. Truly boring!