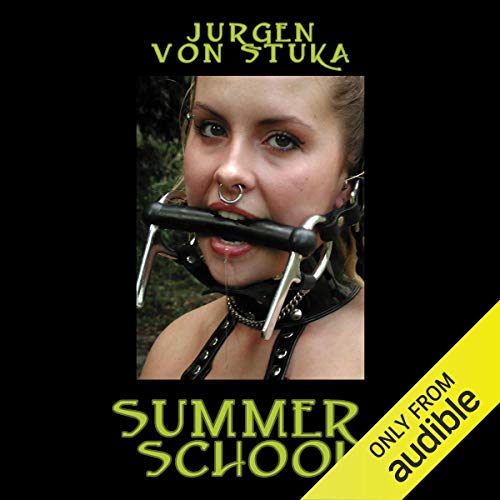 By: Jurgen von Stuka
Narrated by: William Reid
Try for £0.00

Desperately wanting to get away from home for the summer, Dori Hammond, talks her father into sending her to a summer riding school. However, she quickly learns that this is not a traditional riding school, and its unusual training methods are cause for alarm. However, having signed the required contract, she and the other students are obliged to submit to a rigorous training regimen. Unbeknownst to them, they’ll be methodically transformed into human ponies. Headmistress Wright and Headmaster Boswick employ mechanical horses, strict restraint, suspensions, impalement, and the resources of the farm's deepest cellars. Their female students quickly learn what a horse's life is really like and that misconduct will lead to severe punishment. Riding, as the girls discover, is more than taking a pony around the ring. As Head Master Boswick says, "You can't learn to ride until you've been ridden."

Though the girls may resist the humiliating treatment, they often experience an overwhelming sexual satisfaction in the pleasure and pain they are forced to suffer.

Not all the students are at the school voluntarily. Many are spoiled and unruly young women sent there by their wealthy parents. One unlucky German girl, Lucy, is kidnapped on an overnight train and sent to the school, the abduction arranged for by her Dutch boyfriend.

Dori and her fellow students are subjected to discipline and training from both the male and female staff. For those who resist, there is the dairy barn where the girls are turned into human cows. And for those incorrigible young females who fail in equine training and in the dairy barn, there is the lowly squalor of the Hog Farm, where they are good for nothing but sexual sport. For Dori and the others, it becomes clear long before the end of the story that their lives will be transformed forever, in ways they never imagined.

What listeners say about Summer School

Lots of very detailed device/restraint descriptions, wasn't doing anything for me so gave up on it. Good writing and narration though so can imagine it working for those with this very specific kink.

I found this quite revolting, I like errotica but made a bad mistake in buying this. I gave it one star but would have given it -5 if this were possible.

The detail of what is required of a human pony is extraordinary. Also the mental effects of being first a human pony and then a nearly fully medically transformed pony is fascinating and sexually exciting to the reader.

bondage so bizarre and complicated that it defied comprehensive description, and no evidence that anyone takes any pleasure in the activities described

Just couldn't finish this. entirely too much time spent on describing the various restraints the women were subjected to. No real sense of any kind of storytelling being accomplished.

There is no story in this book. It is just moving from one bondage to another and no real completion. The bondage is too complex to follow also. I would not recommend this book.

What disappointed you about Summer School?

Too much pointless punishment, not enough story

Would you ever listen to anything by Jurgen von Stuka again?

What does William Reid bring to the story that you wouldn’t experience if you just read the book?

If you are into the idea of this book, try Family Business or The Abduction of Kelsey