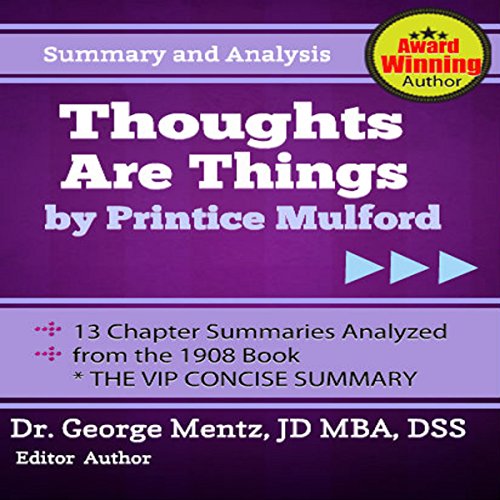 Summary and Analysis - Thoughts Are Things by Prentice Mulford: 13 Chapter Summaries Analyzed from the 1908 Book

By: George Mentz
Narrated by: Sam Slydell
Try for £0.00

Born in Sag Harbor, Long Island, Prentice Mulford sailed to San Francisco on a clipper in 1856 and remained for 16 years. He left for a long tour of Europe in 1872 and then settled in New York City where he became known as a lecturer, author of poems and essays, and a columnist for the New York Daily Graphic (a serial). He's credited with building the body of knowledge of the philosophy known as New Thought.

What listeners say about Summary and Analysis - Thoughts Are Things by Prentice Mulford: 13 Chapter Summaries Analyzed from the 1908 Book

Some of the stuff I got out of this summary

I knew 95% of it already but I guess it’s always good to hear again. Thought he could have gone into much better detail then he did. Here is a little I got out of it

Thoughts are Things Summary Audiobook
We must clear yourself inside to for the great good and peace that will fill us
Find minds of spiritual nature to excel. Associate with the best
Act as if you were your ideal self
Your thoughts attract like thoughts. Your thoughts are omitted and sent out from you.
Whatever you project is what you will get back to you.
You must today action to build dreams tomorrow.
We get the element of love only to the portion we have it in us
Start your day with spiritual energy and act, think and be kind to yourself. Ask and petition from a higher power, pray for the best to happen to all involved. Bless, praise and be thankful for all things good.
Try to not complain or blame anyone for one whole day.
See in mind the thing planned in the completed form
There is no need to think or talk about the past. It has taught us lessons and never need be in those unfortunate situations again.
Send out of your mind into the world with thanks and confident expectation and your goal