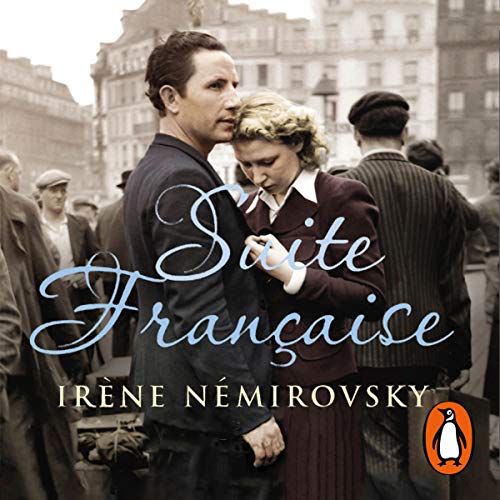 By: Irene Nemirovsky
Narrated by: Carole Boyd
Try for £0.00

In June 1940 France fell to the Nazis. The effects of this momentous event on the lives of ordinary Parisians and the inhabitants of a small rural community under occupation are brilliantly explored in Irène Némirovsky’s gripping and heart-breaking novel. Némirovsky herself was a tragic victim of the Nazi regime but she left behind her this exceptional masterpiece. In Suite Française she conjures up a vivid cast of wonderful characters who find themselves thrown together in ways they never expected. Amidst the mess of defeat, and all the hypocrisy and compromise, there is hope. True nobility and love exist, but often in surprising places.

What listeners say about Suite Francaise

A story of the people left behind

There has been a lot said about his book, it's author and how it came to be published. What many have failed to highlight was the story of the people displaced by war and those who would pilfer from a neighbour rather than ask. The story of how life is a struggle for the locals left to get on with an occupying force. Love. Hate. Murder. It's all in this book which has made the leap from paperback to audiobook beautifully.

Would you listen to Suite Francaise again? Why?

I would because the writing is frank and intimate, creating rounded characters through a mixture of internal perspectives. Carol Boyd reads it beautifully, and doesn't attempt French accents for the characters but gets under their skin to express their emotions.

Learning more about the occupation of France during WWII which I didn't know too much about beforehand. It is obviously and tragically an unfinished novel, and one can't help but yearn for the planned third part to see what the author had in store for her many characters.

Which character – as performed by Carole Boyd – was your favourite?

Lucile in the second half because we see everything from her perspective and can relate to her as the main protagonist, her life completely upheaved by war, causing her to reconsider her choices and commit brave actions.

I have read the paperback and was disappointed that this audiobook doesn't include the appendices - letters written by Irene Nemirovsky to her agents, and to her family once she was captured; and from her husband to her agents, desperately asking after her whereabouts and welfare. They provide crucial background and context as to why the novel was never completed, and painfully document how a successful novelist and her family were torn apart by the Holocaust, like so many.

Brilliant narration of this intelligent book.

Loved this! Read as well as listened to this beautiful, intelligent and heartrending account of human behaviour in a small provincial town in France overwhelmed by the invading German army in the 1940s. Provincial jealousies, self righteous arrogance and bitter resentments, desires and dreams frustrated by occupation but also with empathy for the soldiers of an occupying army. The exodus from Paris as the Germans march in - fears magnifying intrenched behaviours of selfishness, possessiveness and class divisions.
A tapestry of humanity in microcosm at a time of extreme stress.

Suite Française is even better than I had expected. It is so revealing of the events at the beginning of the Second World War in France, the attitude of both the French and the occupying German soldiers. It is extremely well written and although there are many characters they are easy to follow through the story. They come to life, their inner thinking explored. They feel very real. I felt a whole gamut of emotions for each of them as if I had actually known them personally.

The reading is clear and exact and in tune with each situation and character. A great book, an excellent narrator.

hard to get into the story " for me anyway" but worth the effort. some very unpleasant people in this book. xx

Superb book. The story of the book's genesis certainly adds to how impressive it is.

When is the story going to start!

Please, someone, tell me that it is worth listening to the end. All I have heard so far are new characters being introduced.

beautiful writing. a story written within a few years of the events. an important historical piece published posthumously

beautiful Story, with a mix of both fact and fiction. I'm glad to of read it and looking forward to reading another.