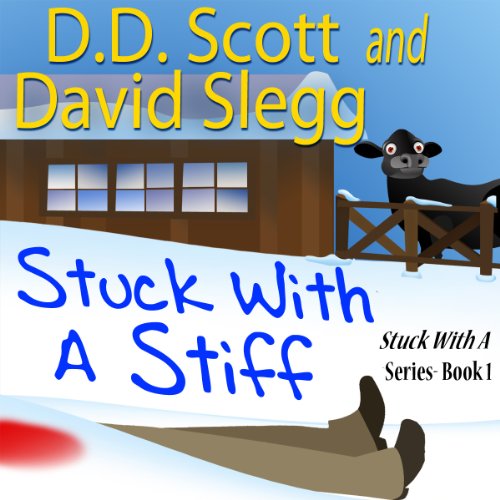 Stuck with a Stiff

The Stuck with a... Series is Castle-gone-country with the mom squad, Betty Boop, and My Cousin Vinny in the barnyard.

But this ain't no ordinary barnyard.

There's a lot more than a crazy rooster missing from the chicken coop, a bad ass cow causing a bunch of trouble, and a dog looking like a creature out of a storybook. There's a stiff too. A stiff - as in a dead guy - in a snow drift near the chicken coop.

Things aren't lookin' too good for Nicky Blane, who owns the farm. He's used to creating fictional stiffs for his best-selling novels, not defending himself from being framed for murder.

Bonus content included: In case you missed D. D.'s Stuck with a... Series Prequel Stuck with a Schmuck - which gives you a superfab fun setup to Stuck with a Stiff - no worries...'cause it's included!

D. D. Scott is an Amazon Top 100 Best-Selling Romantic Comedy and Humorous Mystery author. She's also a Writer's go-to-gal for muse therapy and indie epublishing, the co-founder of The WG2E - The Writer's Guide to E-Publishing, and the founder of The RG2E - The Reader's Guide to E-Publishing. You can get all the scoop on her, her books, her online classes and live workshops, plus juicy tidbits too from her new cyber home...D. D. Scott-ville.

David Slegg is a debut humorous mystery author. He grew up on a cattle farm on the banks of the Wabash River and studied Ag Economics at Purdue. He's been just about everything under the sun - a waiter, a research technician, a bouncer, a salesman, a mapmaker, a bookseller, an ultra-marathon runner, an AutoCAD drafter, and an editor. In his spare time, he recently earned his MLIS (Master of Library and Information Science) from Simmons College in Boston. His friends have been telling him for years that he should write a book. Let's just say he's had an unusually high number of improbably unlucky experiences. We're talking about the sorts of things that you'd find humorous if they were happening to a character in a novel but not so funny if they were happening to you. He's happy to be inflicting some of these situations on his characters. Hell, it's probably therapeutic.

What listeners say about Stuck with a Stiff

Had to check to see if it was abridged

Would you try another book from D. D. Scott and David Slegg and/or Karyn O'Bryant and Jeffrey Kafer ?

maybe, if it was really cheap

What could D. D. Scott and David Slegg have done to make this a more enjoyable book for you?

flesh it out -- it has a clever premise, but the jumps are too sudden. I kept thinking it was a badly abridged version. The extended family premise was pretty much wasted: they set up these potentially interesting relationships then did nothing with them.

What didn’t you like about Karyn O'Bryant and Jeffrey Kafer ’s performance?

Dual-narration either works or it doesn't. This doesn't. The voices didn't complement each other. Plus, the Italian accents were excruciatingly awful -- sounded like a poor rendition of Romany gypsies. My Sicilian relatives would run screaming from the room.

If you could play editor, what scene or scenes would you have cut from Stuck with a Stiff?

I wouldn't have cut, I'd have added!

Okay, it wasn't totally awful, just nowhere near as good as it could have been. The ending obviously sets up a sequel -- I wouldn't mind seeing the authors try again.

Didn't even get through the first chapter before I returned it. Couldn't get past the crudeness and foul language. Would not recommend it or buy another from this author.

A cheese filled blend of CSI, sopranos and acid

Would you try another book from D. D. Scott and David Slegg and/or Karyn O'Bryant and Jeffrey Kafer ?

No way. They pulled so many stereotypical yet flat characters into their barely there plot it was overwhelming. Not one character ever developed into anything but wallpaper. Even with the use of several explicatives - which seemed like a 6 year olds attempt at sounding like a grown-up - not one sentence crawled beyond the competent threshold.

What could D. D. Scott and David Slegg have done to make this a more enjoyable book for you?

Stop populating your books with granny's wearing scuba suits and try writing some decent dialouge and a coherent storyline.

Who would you have cast as narrator instead of Karyn O'Bryant and Jeffrey Kafer ?

Almost anyone but them. Both sounded like they were being tortured into reading - when Kafer didn't sound like he was listing baseball statistics.

A devil may-care-cow. Not something you see everyday.

Don't buy this book. I love to listen to half-baked mysteries - bubble gum for the brain. This one wasn't just poorly written - it seemed to have been concocted by someone who left their local watering hole at three am, twelve shots in and who thought they were literary geniuses.

I enjoyed this story. The characters were interesting and very amusing. And, it turned out that the mystery was pretty good too! I listened to the Audible version, and the alternating narration of the male and female characters added to the story. This is the first in the series and I will probably check out another one.

An added plus for me was that the main character loves animals, as evidenced by her rage when the rooster was kidnapped. The crazy cat lady Aunt is a fun character and I'd like to see more of her and her "sweet pea" (a shotgun!!).

Returned it, Narrator was annoying

I think it was the narrator that bugged me, but maybe it was the writing, i just found the main character so annoying. It reminds me of the Stephanie Plum series, which i like the idea of, but find her weakness and sillyishness very unappealing. If you like that series though, you will probably like this one.

Has Stuck with a Stiff turned you off from other books in this genre?

Yes, i was trying them out for the first time, and probably the last.

What made the experience of listening to Stuck with a Stiff the most enjoyable?

I loved having both a male and a female voice to deliver the great storyline!

This has a great storyline, so the listener wants to keep going on, instead of waiting for another time.

What does Karyn O'Bryant and Jeffrey Kafer bring to the story that you wouldn’t experience if you just read the book?

Great voices, so the characters seem to come to life.

As the authors suggested, it's a little of Castle & Beckett gone country------great way to put it!

I loved the voice duo!