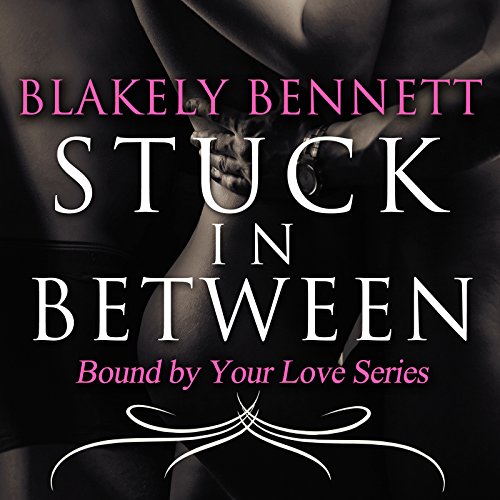 Jacqs is a 28-year-old woman caught up in an on-again, off-again relationship with Bond, who is her best friend and the one who causes her the most heartache. She succumbs, yet again, to his powerful charisma but vows not make it into more than it is--a great night of sex. Bond, too sexy for his own good, wants Jacqs for himself as he dates his way through the female population of South Florida. He selfishly doesn't see the conflict of interest. Red, Bond's best friend, has watched Bond take Jacqs for granted for way too long and soon stakes his own claim on her. Will Red and Jacqs's budding relationship pull apart their tight-knit group of friends, and will Jacqs survive being Stuck in Between?

What listeners say about Stuck in Between

The narration for this book is now probably in my top 3 favorites for this genre. Lily Horne was INCREDIBLE. She made this 4 star book into a 5 star Audiobook IMHO! I think she has the perfect voice for any sexy erotica story! She really made me believe everything that these characters were feeling from love to heartbreak and everything in between!. GREAT JOB LILY! If the rest of this series is narrated by this narrator, I'm sold on every book!!!

A masterpiece of crazy

As Jaqs' friend Lainey says in this book: "It's a tangled mess, really. And, I'm really interested to see how it all unwinds."

That line perfectly describes this book. No seriously, I liked it. Just keep reading and you'll understand.

You know how you read the excerpt and read a book, yet come away disappointed? You think, it had all of the elements but the story fell apart, didn't come together, got too over the top, and just fell flat? Well, this book is just the opposite. This is typically not my genre, because of all of the things I just mentioned above. I find that often in this genre everyone is so hung up on the sex, that seems boring and disgusting without any story or realistic characters to connect it to. Or, it's this totally abusive situation that in no way resembles consensual sex or love, but the girl is just too desperate to lose this person's abuse she's mistaking for love, or a gluten for punishment, hard to tell sometimes.

HOWEVER, that should have been what was happening here. This book had all of the elements to make it that full of meaningless sex, with no real story or depth, with wooden crazy characters that I could care less about and were so uninteresting that the sex scenes would just feel contrived and icky. But, it was just the opposite.

Ms. Blakey Bennett knows how to pen a full story with rich, developed characters. Were they over the top at times? Yes. Was it crazy? Yes. Where these characters a fairly screwed up bunch, from dysfunctional families that need to spend some time on someone's sofa in therapy? Yes. Yet, they were characters you could relate to as real. Or like that same friend that will not just let this guy go. Or, the friend who's a cheater who you know is going to get caught, but yet you can't turn your back on them when the *stuff* hits the fan because of their bad choices. I won't say more, as I don't want to add any spoilers.

But, the real emotional changes the characters went through, even the ridiculous emotional changes they went through, brought on by their own crazy decisions seemed realistic. There is a reason people watch those reality television families and marvel at how screwed up they are. They are a train wreck you can't stop watching. There really are people who wind themselves up in these crazy situations. And, of those situations described in stories, Ms. Bennett penned one that felt way more realistic then the contrived stories created around and seeming to only be half attempted to throw characters together for raunchy sex that fails to draw you in because there's no real story to tie it all together.

I found myself pulled in and totally absorbed in this disturbing story surrounding these characters. Even loved the reference to Cards Against Humanity, an outrageous game I have even played myself. Just so many realistic touches added to circumstances that could easily, and to most people, be something unrealistic and ridiculous. That speaks to this authors serious talent to spin a solid, good, realistic, and creative story. I am so glad I gave it a chance. I made the mistake of starting it at night and forced myself to put it down when I was sucked in so quickly. I picked it back up in the morning and listened to the end, getting nothing else done all day.

The narrator, Lily Horne, did an amazing job bringing these characters to life. She seemed to capture the personality of each character. Her portrayal of each character had me seeing in my mind as if I were either a spectator in the room as they went through all of their various and individual insanities. This was a perfect blend of a good writer being paired with a great narrator who can bring those characters to life in audio.

This was a hot story from the start . I can listen to it over and over and the narration was different in a good way. She slow so soft and sweetly. Ummmm bottom line it's a pany wetter . GET IT

The narrator, Lily Home truly brought this book to life! I have read this book in eBook format and loved it. Adding voices and emotions to the story made it spectacular! The narrator gave it a heartbeat and a soul so to speak!

This story is about 3 best friends. Jacqs (Jacqueline) Has loved Bond (Mitchell) for a very long time, over 8 years on and off again. Problem is Bond is faithful and see nothing wrong with it. Bond always assumes that Jacqs will always be there. Red (Adrian), has loved Jacqs for years too, but he never told her. Instead he always picks fights or just picks on her. One day when Jacqs is stranded, Bond send Red to pick her up and to make a long story short, Red confesses his feelings. So now Jacqs loves them both and wants them both!

This is every girls fantasy. Having 2 men head over heels in love with her. This book is hot & steamy, tantalizing, exciting and thrilling, yet laced with love and suspense! The voices in the audio only improved an already perfect story! The author, Blakely Bennett does a fabulous job capturing us in her plot and holding our interest from beginning to end! Great job ladies!!!

This is the story of three friendsm1woman and 2 men.trying to decide who she likes better as more than a friend leads to some steamy scenes and a perfect ending.Lily Horne is a fantastic narrator!I was provided this book free by the author, narrator or publisher.

This book has taken me forever to listen to! Well, only a week or so. That was my fault, lol. I loved it! There were some parts I would have liked to have thrown my tablet against the wall, but I'm too poor to be able to afford another one.

Overall, this is an awesome book to listen to. The sex scenes are hot, the dialogue is funny to the point where you will find yourself laughing out loud.

The narration was good. Only a few slip ups to be heard. It felt a little rushed when she changed characters. There wasn't much of a pause in between characters at times and left me wondering who was talking or if I was just behind.

Jacqs, the "h" in this story, kind of irritated me at times. She seemed...I don't know...needy? In song think that's the exact word for it, but I will edit it when I think of it.

I received a free copy from either the author, narrator, or publisher from Audiobookblast·com in exchange for an honest review, which I have given. All thoughts are my own.

Have your cake and eat it too!

I would recommend this book to a friend. I thought it was well written and thought out. The girl likes one guy and then the other but doesnt want to hurt the other.

I love the fact she didn't have to make a choice between the two but gets to fight with herself to choose or not choose.

She made the whole story credible and was easy to tell which character was talking.

I was given this audio book at no charge by the author of this book in exchange for an unbiased review via audiobook blast. Com

"I was provided this audiobook at no charge by the author, publisher and/or narrator in exchange for an unbiased review via AudiobookBlast dot com"