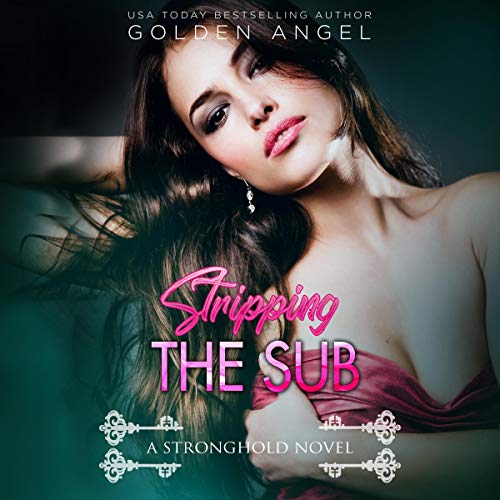 By: Golden Angel
Narrated by: Rosie Allen
Try for £0.00

Come and meet the doms of Stronghold....

Ever since Michael Waverly joined Stronghold and recognized Ellie Sanders, he's wanted to scene with her, but over time, it's turned into something more than that, and he knows one scene just won't satisfy him. Unfortunately, she's been avoiding him, and she has a reputation for never doing more than playing at the club - no commitments.

Now, for the first time, her defenses seem to be down, and she's giving him a chance - but while she's willing to sign a club contract with him, will she ever be willing to open her heart?

Ellie is so full of secrets that sometimes, she feels like that's all she's made of - all the things she doesn't want other people to know about her. The person she's most afraid of revealing all of her secrets to is Michael - her one-time protector and crush in high school, now grown into a devastatingly attractive sadist at Stronghold. She wants to play with him. More than that, she wants to know if maybe she has a chance for a normal relationship with him...the first man in a long time whom she's both trusted and been attracted to.

Unfortunately for Ellie, normal has always been out of her reach. The most important secret of all is the one she's keeping from everyone, especially Michael, because there's no way he'd ever want her if he knew the truth.

But communication is everything in a relationship like this, and Michael's determined to strip back all of Ellie's defenses and claim her as his own...with a determined dom like that, what chance does a scared subbie have of keeping her secrets?

What listeners say about Stripping the Sub

I have enjoyed everything I have heard in this series and even the Venus series. I enjoyed this book more than I thought I would. The couple in this book is a Sadist and a masochist. She had a hard past and has issues getting past certain parts of her life now. There are some rough or intense sexual situations in this book but it’s not bullying, it’s what she “needs” so it was easier for me to listen to. The narration is great. We get a HEA and no cliffhanger. I recommend this book and this series.

Ellie has a lot of issues she needs to work through. Including a horrible event that happened in the past. She isn't looking for a relationship with anybody. So when Michael walks back into her life, she's thrown through a loop. She tries to keep herself from him, but after a year, she finally gives in. I really adored this book. I have to be honest, it does cover a very heavy topic. Something that many women and even some men face or experience in their own way. It was inspiring and sexy. I didn't think those two could meet and still make an amazing book. I'm very impressed. I can't wait to read the rest of this series. It is also very hilarious! I mean... Sorry Olivia! Ellie is such an amazingly strong character. She's been through so much and it shows. She's impressed every day by the support network she seems to have found. Michael is pretty amazing as well. He's the absolute perfect book boyfriend. He's everything most women would want in a man. I really enjoyed listening to Rosie. She was pretty amazing. She added so much more to an already amazing story. Not that it needed much added to make it amazing, but still. I'm pretty sure that she narrated the other book I listened to as well, but I'm not fully sure. Either way, I'd be fully willing to listen to other books she narrates. I really did enjoy this book. It was very inspirational and unique. It was also full of heat and desire. I do have to be honest and state that there is a topic in here that can be triggering to some. It still makes a very beautiful read. I loved it.

Stripping the sub of more than just clothing

Ellie and Michael have a history. Michael protected Ellie back in school and Ellie never forgot that. Michael knows Ellie just does scenes, but he has always wanted more than that. But in order for Michael to have Ellie, he has to strip her. Strip her of her clothing, her wall that she puts up and her defenses about her secrets. WHile Michal scenes with Ellie, and steams up the pages, he is also working towards having her for longer than a scene. I loved this interaction. It brought depth and emotion to the story. Golden Angel brought out the feels and the steam in this book and left me wanting more. I cannot wait to read the rest of this series.

Rosie brings this story to life. I enjoyed listening to her narration. She has an easy to listen to voice that captures the readers attention. Rosie is able to bring out the best and worst of the characters and make them real. I felt as if i was a fly on the wall in the story. Overall, this was a great narration.

Over coming the past

Another great book in the Stronghold series. I loved Michael and Ellie and the chemistry they had. Michael was patient and caring with Ellie even though she had a lot of fears to overcome due to a past relationship. It's nice that all the friends are in every book and we get an update on all the couples each time a new story comes out. Rosie did a great job narrating this story and bringing the characters to life. I was given this free audiobook at my request and have voluntarily left this review.

Wonderful presentation of a great book

Golden Angel is brilliant. I binged read all 8 books/novellas in this series in 4 days and I still wanted more! More came with the audio and the wonderful narration by Rosie which kept my attention riveted to a story I already knew.
I love the world Golden Angel created and Michael and Ellie's story was both heartwarming and
sizzling. I also love how she so seamlessly incorporates the secondary characters couples from previous and future books
I was fortunate to receive an audible credit via Audiobook Obsession.

Brilliant, I can’t get enough of this series

This book really makes you think about a lot of issues that people have to go through in their daily lives. I love that Golden isn’t afraid to speak up about these. Great characters, amazing storyline and brilliant chemistry. Fantastic performance from Rosie.

Elle has a past with Micheal, but he left for college and her past after he left had a painful event with many repercussions afterwards. When Michael comes back to the area and Stronghold, Elle runs. She knows she wants more than what she has had since the hurt, but can she do it and get past all her insecurities?!
the book has been building since the beginning of the Stronghold series, and it was worth it. This book has triggers, but is told in a way that any about the event but the feelings and other emotions that come with such an event. I struggled with not wanting to read or listen, but when I read it it made me love Golden Angel's writing even more. Listening to it just made me love Rosie (a new narrator for me), and have a whole new appreciation for Golden's writing skills.

So much more than sex

I think I peed a little laughing so hard at Sharon and the Zoo scene. But more over. I loved how this book tackled the hard subject of rape and its after effects. The PTSD and anxiety is real, but with professional help and good friends you can get through it.

Ellie has been someone I’ve wanted to read more about since I started these books. I knew something had happened to her, but wanted to know more. Her story is heartbreaking! However, I’m not sharing why here, other than to say the scene where she shared what happened with her friends from Stronghold, was a balm for me. The support and belief from them... loved that!

Michael knew Ellie in high school. He’s been interested since he first saw her at Stronghold... but she has avoided him. He doesn’t know why, and when they finally get to speak and share... she pushes him away.

I love Rosie’s voice! She’s been my favorite on these so far.

Loved Michael and Ellie's story! This series is awesome! you really need to listen to them in order so you can understand what is going on with the group. But it's worth it!!!

Loving this Stronghold Doms Series. Golden Angel never ceases to amaze me. She pulls you into her world of wonderful characters who are like family. It’s easy to relate to them and feel what they feel. Michael and Ellie have a strong connection but something in her past is keeping her from him. With him being a sadist and her a masochist makes it easy for them to get together at the club. Michael wants more and won’t give up until he has all of her. Will Ellie fight him? Or fight for him? A definite must read.

Rosie did a wonderful job on the narration and bringing the characters to life. I was given this free copy audiobook and have voluntarily left this review.

I loved Michael and Ellie story

This book really makes you think about a lot of issues that people have to go through in their daily lives. I love that Golden isn’t afraid to speak up about these. Great characters, amazing storyline and brilliant chemistry. Fantastic performance from Rosie.
#audiobookobsessionreviewer

Golden Angel does an amazing job talking about a difficult topic. A topic that many women and men are ashamed to talk about. I love how in this book Golden not only has stories being shared but takes the time for the characters to explain their experiences.

I think that Elli and Michael are an interesting and sweet match. My one struggle was that there was a lot of internal dialogue that the characters and I would have liked a little more interactive dialogue. That is purely just my preference and in no way changes how interesting and entertaining this book is. I love how there is this level of uncertainty and suspense throughout the entire book!