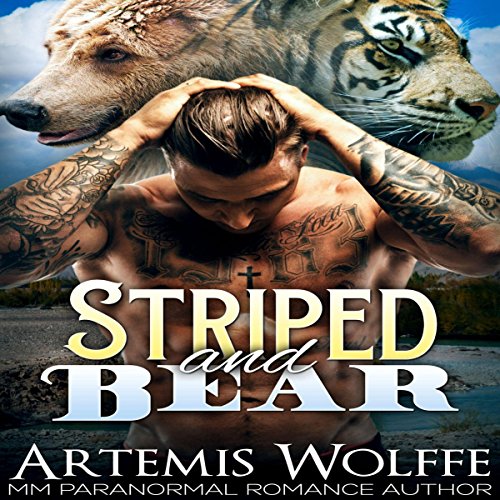 By: Artemis Wolffe,Mercy May
Narrated by: Gus Klondike

Matthew Bruner is a bear shifter destined for greatness. Or so that's what he's always been told. As the next in line to become alpha of his clan, Matthew's days of singlehood are drawing to a close. Long since committed to a prearranged mating, Matthew finds himself feeling trapped and, worse, afraid. In a desperate attempt to prolong his freedom, Matthew flees his family's ancestral home and heads to the nearest city. It's there that he meets Ezra Tier, a tiger shifter with a bad streak the size of a mountain.

Ezra Tier has spent the better part of his life not giving a damn. He goes where he wants, does what he likes, and answers to no one. Leading a life as a globetrotting rogue has its perks, and for Ezra one of those perks has been the ability to pick up and move on whenever things get too complicated and messy. So when he encounters a simple mountain bear shifter with broad shoulders and a shy personality, it's all Ezra can do to maintain his unattached persona.

When a familiar and dangerous presence shows up in search of Matthew to bring him home, Ezra must change his ways in order to keep his newfound love by his side. Failing that, Matthew will be forced to go through with his prearranged mating, and Ezra will lose him forever. Can these two shifters from different worlds come together in time to save their budding relationship? Or will the experience leave their hearts stripped and bare?

Fun read with bears and tigers - oh my!

Matthew is a bear shifter whose clan has him slated to mate for political/business purposes. He runs away because he can’t mate a female and doesn’t want to be tied down to the family business anyway.

On his travels he meets Ezra, his destined mate, and a tiger. Ezra and all tigers are footloose and fancy free, so at first he fights the mating because he can’t see himself tied down to a mate, especially bears who like to build a den and stay in one place.

In the end there is a grand battle with the evil father and the two mates end up HEA.

This is a very short, free read on Kindle Unlimited. The sex is super hot and the story pretty sweet.

I enjoyed it for what it was, a light, fluffy, fun read.

I hadn’t heard a narration by Gus Klondike before but he was an excellent choice. He did a great job adding in emotion and differentiating the voices. I really enjoyed this narration and thought it was a great way to experience this book.

I can honestly say that this story was not what I expected. I loved this story. Though a shorter story, the action, the adventure, the drive to mate, and an unreasonable parent made this an excellent read. Never really been into the MPREG genre, but this one captured my attention and I so want to know what is going to happen with the twins...(spoiler)...Matthew and Ezra are an wonderful couple and the journey to happiness was a good one...Gus Klondike did a phenomenal job with the narration...can't wait to read the next part of the story...

Would you try another book from Artemis Wolffe and Mercy May and/or Gus Klondike?

Would not have rushed the ending so much - would have given more details about the pregnancy.

Enjoyable mpreg with cross species mates (tiger and bear), but ends with Matt 9 months pregnant on a kind of cliffhanger-seeming ending.

Definitely grabbing the second to see what happens!

I absolutely loved this story. Narration just brought it to life. A must if you are into predator/predator MM mates!

I am new to these two authors. I'm very pleased with this first book. The story of Matthew & Erza 2 👍👍s up. Gus Klondike did a nice job with his narration of characters. I look forward to listening to this complete series.

The story was cute. I really enjoyed how Matt found his voice and stepped up to protect the family he longed for. The ending was a little weird but everyone deserves a happily ever after.

Short, sweet, and sexy. Loved the narrator. It's hard to developer deep characters in short stories but I really enjoyed these two. Looking forward to next book.

This book was short but good and had a bit of an abrupt ending to it, small little cliffhanger leading us into book 2. I personally would have been happier with the two books put together made into one longer one, but this was good.

But, for it being so short, it was pretty hot and dirty. I liked the story and the characters. I had fun listening to this in audio format. The narrator did a great job giving each of these characters their own voice. Definitely a nice quick book to read or listen to. It was fun getting a look into the life of a Bear shifter and his reluctant Tiger shifter mate although I would not have minded this book being a little longer in order to get more communication and dialogue in between these two. But definitely a good start... Now, on to book two...

This was a super quick, fun, sexy, smutty listen!! Perfect pick for smutathon plus it was a shifter & LGBT story.

This specific video review will be included in the July 2018 wrap-up.

Short story but I really enjoyed it