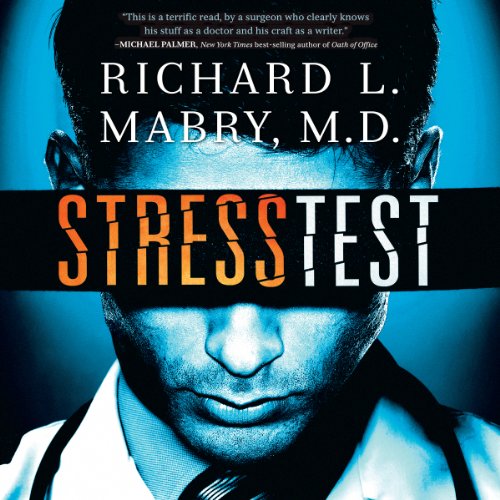 Dr. Matt Newman thought he was leaving his life as a surgeon in private practice for a better one in academic medicine. But the kidnappers who attacked him as he left the hospital at 2 a.m. have no such plans - they just want him dead. Bound and in the trunk of his car, Matt’s only thought is fleeing with his life. He does escape, but at a price: a head injury that lands him in the ICU...where he awakens to discover he’s being charged with murder. Sandra Murray is a fiery, redheaded lawyer who swore she was done with doctors after her last relationship. But when Matt calls, she knows she can’t walk away from defending someone who is truly innocent.Matt’s career is going down the drain. His freedom and perhaps his life may be next. But with the police convinced he’s a killer and the kidnappers still trying to finish what they started, finding the truth - and the faith to keep going - will be the toughest stress test Matt has ever endured.

"This is a terrific read, by a surgeon who clearly knows his stuff as a doctor and his craft as a writer.” (Michael Palmer, New York Times best-selling author of Oath of Office)

What listeners say about Stress Test

As a Christian it is hard to find action packed Christian adventure stories. This book delivers. It is a great book with a great message with a lot of adventure. I eagerly await his next book.

This main character has nine lives for sure....some of the secondary characters were weak but the overall plot was good and then end result was pulled it all together.

Not my favorite narrator though.

I don’t often write reviews, but this author and narrator certainly earned the five star reviews here. I’m not crazy about trilogies, etc., but I must admit that I wanted the story to go on.

The story was interesting for the first half of the book. There are lame, cringe-worthy metaphors sprinkled throughout, but not enough to choke on. And then... cheesy christian messages—mild and quick at first—increase in frequency and become embarrassingly transparent and pedestrian. Three quarters in, I became so sick of the crap, I gave up. I won’t waste my time with this tripe!

Excited to read a book written by a doctor. The book was medically accurate and interesting but the story disjointed. You never get a clue about who is involved in trying to get the main character until the very end of the book. The other characters out to get him were not well developed and the story lines did not intertwine for the reader to see the relationship. If it wasn't literally spelled out at the end it would still be a mystery why this MD was being targeted. Would have liked to see the bad guys side explored further to understand the missed identity and yet still have suspense as a reader. The police aspect and details felt sloppy and hard to believe the ineptitude.

This is a basic thriller, as described on the box. I thought the characters were just a bit flat and dull. I would give it a 2.5 if I could, because it was pleasant enough to listen to (except for all the Christianity stuff).

Warning This is a preachy Christian book

Every turn of story the actors ask, "is this why God has brought me here" "Is this what God wanted me to do?" Its a Christian title which was not clear to me to begin with. I find that annoying so I gave it one star. I just wanted to warn others.