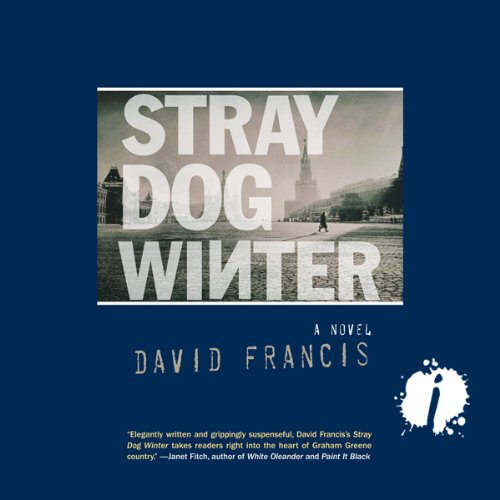 This is an Audible IndieFirst selection.

Enthralling, atmospheric, and suspenseful, Stray Dog Winter is at once an unconventional Cold War thriller and an original, unforgettable love story set in 1980s Moscow.

Darcy, a restless young artist, travels to the Soviet Union to visit his elusive half-sister, Fin. Together only briefly during their youth, Darcy and Fin are estranged by the distance between them, yet inextricably bound by the secrets and betrayals of their childhood.

Upon his arrival in the depths of a bleak Moscow winter, Darcy is immediately embroiled in Fin's mysterious life there and also drawn to Moscow's forbidden underground, finding himself swept up in political and sexual intrigues of a nature he could never have imagined.

As the past resurfaces and the present closes in, the intricacies of their bond as brother and sister are revealed, and Darcy uncovers Fin's involvement in a dangerous game of her own. Their worlds threaten to collide with profound and deadly consequences.

With Stray Dog Winter, David Francis has entered Graham Greene territory, placing a naive hero in the center of political intrigue and betrayal at the end of the Cold War. Written with a stark, haunting beauty, this novel is pure Soviet noir, a remarkable tale of love, passion, politics, identity, and espionage.

Please do listen to the clip first

A truly horrendous narrator - I lasted 15 mins and I'm a very forgiving listener - takes a lot to make me switch off.

I can't tell you if it's the reader or the story, but this was a complete waste of money for me. I could not get past a few hours. It's torture.

The reader's voice is jarring. The book really wasn't written well for this format so there's so many "she said" and "he said" that it becomes distracting. Beyond that, I didn't care a bit what happened to the characters after listening for 2 or 3 hours. Perhaps the written version is terrific. I can tell you that the audible version is not.

I agree that audible owes us a refund on this one. I don't care at all about the gay content, but the reader is the worst I've heard in my 3 years on audible. I have no idea if this is a good book. I find it unlistenable.

Awful reader ruined this book for me

I only could get through about 2 hours; the reader sounded like an elementary school student with his uplift at the end of nearly every sentence. If this was a good story, I never found out because of this.

I have been a voracious reader my entire life and rarely do I not finish a book. This one I could not. I am not opposed to sexual content or violence but after two hours of listening to random sex, I was bored. I could not relate to one likable or compelling character that urged me on. The plot was ever so slightly intriguing but not enough. I wish I had read reviews before purchasing this book.

Culd not get into it, did not bother to finish it.

Ditto the above review - and there should have been mention about the homosexuality in the synopsis.

Deceptive Description Does Not Help This Book

Audible owes us all refunds on this book for not being upfront with a notice of the homosexual content.

With the suicede of my gay son 4 years ago I don't seek out literature that will make me remember his pain, nor his mother's and my pain.

I am deeply disappointed with Audlble. We had no book jacket with which to evaluate our purchase.