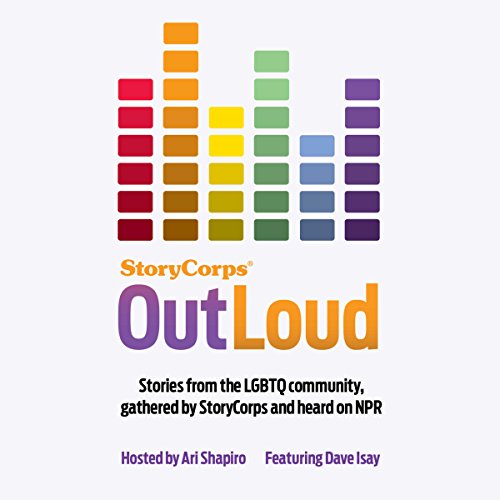 StoryCorps OutLoud sets out across the country to record and preserve the stories of LGBT individuals along with their families and friends. OutLoud is a project undertaken in the memory of Isay's father, psychiatrist Dr. Richard Isay. Professionally credited for helping to persuade the mental-health community that homosexuality is not a mental disorder, Dr. Isay was himself a closeted gay man for many years. He came out to his son at the age of 52, and in 2011 he married his partner of 31 years, Gordon Harrell, before passing away suddenly from cancer on June 28, 2012.

On June 28, 2014, the 45th anniversary of the Stonewall uprising, StoryCorps inaugurated OutLoud, a three-year project to capture the experiences of LGBTQ people. In particular the project will seek stories from young people, minorities, and those who lived before the uprising, which was a response by gays to a police raid on the Stonewall Inn in Greenwich Village and helped precipitate the gay rights movement.

"We live in a time in which absolutely everything is a source of division.... But you don’t hear any political agenda on StoryCorps. You don’t hear any agenda at all. You just hear a desire to share." (Stephen Colbert)
"This collection of firsthand accounts from StoryCorps is both heartrending and heartwarming. These personal narratives from the LGBTQI community - which recount their coming-out experiences with a family member - will have listeners laughing and crying at the ensuing surprises and tragedies." ( AudioFile)

What listeners say about StoryCorps: OutLoud

This was a really nice listen. It did fee like listening to an NPR segment. In retrospect, Ari Shapiro doing the narration was probably the reason. Now whether you agree or disagree with their lifestyle is not the point. At least it wasn't for me. The people who shared their life stories for StoryCorps are brief, but they are important stories of fear, shame, triumph and most importantly love. With the recent attack in Orlando, I think it's important to recognize how much hate (and love) is still directed to members of the LGBTQ community.

Apart from the StoryCorps oral interviews is a history of the Stonewall Riots. Also mentioned is the story of Kitty Genovese. I recognized the name but didn't realize until listening that there is more to her story. Both are brief, but they encouraged me to have a Wikipedia moment. Ultimately I was able to recognize that there's no big difference between their voices and mine. No gulf. Just people.

Even a day later I remember the stories of "the adoptive parent", "the war widow" and the really old lady and her f bombs! Very moving.