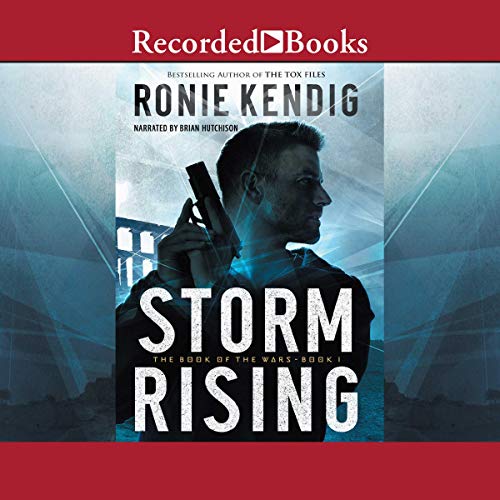 Mentioned in the pages of the Septuagint but lost to history, the Book of the Wars has resurfaced, and its pages hold secrets - and dangers - never before seen on earth.

Tasked with capturing the ancient text, former Navy SEAL Leif Metcalfe is finally given command of his own team. But their best efforts are ruined when a notorious Bulgarian operative known as "Viorica" snatches the volume right out from under them.

Iskra "Viorica" Todorova is determined to use the book to secure the thing that matters most - freedom. But a series of strange storms erupts around the globe and the coming dangers foretold in the text threaten crops, lives - entire nations.

Though both are haunted by secrets of their past and neither trusts the other, Leif and Iskra must form an uneasy alliance to thwart impending disaster. However, the truth hidden in 2,000-year-old words could unleash the storm of their own destruction.

What listeners say about Storm Rising

Loved it. Unbelievable that this exciting story had no cursing. Would highly recommend this novel to others. I can hardly wait to read other books by this author.

I liked the cross cultural relationships. the description of the storm was very believable. the antagonist was pretty good.

I was really excited about listening to this book when my wife told me about it. I am a huge Mitch Rapp and Scot Harvath fan but this book was all over the map. No real character details and I had a real hard time following the story. Also the ending was anticlimactic. Was really hoping for more and I was very disappointed.

Excellent start to a new series. The main characters are quite memorable and I’m looking forward to the continued story. Plenty of suspense and action. Outstanding narrator as well.

Ronie Kendig is a master storyteller. I liked the other series by Ronie Kendig. But this book was not only more violent than I like, but I also found it to be very scary. When nonbelievers try to force Armageddon so they can prove the Bible is wrong, and rule the world—the premise was too scary for words. I don’t want to include spoilers, so I’ll stop now.