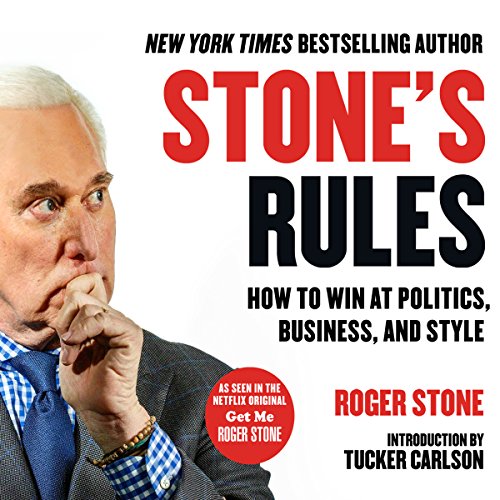 By: Roger Stone
Narrated by: Paul Costanzo
Try for £0.00

Rules to live by from the master of political dark arts, as seen in the award-winning documentary Get Me Roger Stone

At long last, America’s most notorious political operative has released his operating manual!

A freedom fighter to his admirers, a dirty trickster to his detractors, the flamboyant, outrageous, articulate, and extraordinarily well-dressed Roger Stone lays out Stone’s Rules - the maxims that have governed his legendary career as a campaign operative for four American presidents, from Richard Nixon and Ronald Reagan to Donald Trump.

As a raconteur, pundit, prognosticator, and battle-scarred veteran of America’s political wars, Roger Stone shares his lessons on punking liberals and playing the media, gives an inside look at his push to legalize marijuana, details how much "linen" to show at the cuff of an impeccably-cut suit, lays out how and why LBJ orchestrated the murder of JFK, and reveals how to make the truly great marinara sauce that is the foundation of Stone’s legendary Sunday Gravy.

Along the way, Stone dishes on the "cloak and dagger" nitty-gritty that has guided his own successes and occasional defeats, culminating in the election of the candidate he first pushed for the presidency in 1988, Donald J. Trump.

First revealed in the Weekly Standard by Matt Labash and commemorated by CNN’s Jeffrey Toobin, the blunt, pointed, and real-world practical Stone’s Rules were immortalized in the Netflix smash hit documentary Get Me Roger Stone - part Machiavelli's The Prince, part Sun Tzu’s The Art of War, all brought together with a highly-entertaining blend of culinary and sartorial advice from the Jedi Master of political dark arts.

From "Attack, attack, attack!" inspired by Winston Churchill, to "Three can keep a secret, if two are dead,” taken from the wall of mob boss Carlos Marcello’s headquarters, to Stone’s own “It is better to be infamous than to never have been famous at all”, Roger Stone shares with the world all that he’s learned from his decades of political jujitsu and life as a maven of high-style. From Stone’s rules for campaign management to the how-to’s of an Internet mobilization campaign to advice on custom tailoring to the ingredients for the perfect martini from Dick Nixon's (no-longer) secret recipe, Stone has fashioned the truest operating manual for anyone navigating the rough-and-tumble of business, finance, politics, social engagement, family affairs, and life itself.

What listeners say about Stone's Rules

If only things that Roger Stone want to share with us is fashion tips than how on earth he was so successful as political campaign advisor. This book is nothing more than appraisal of Trump and Nixon and some fashion tips. Judging by this book Elon Musk should never be successful businessman and yet he is. Waist of time and money with this book.

the man myth legend himself the deep state is trying to bring him down. if you are a soy boy beta you won't like this book

There is a lot of info but it is presented well and in a realistic conversational way.

This is the modern day equivalent of the Art of War. Roger Stone makes audible great again!

Correlates a lot with principles in Robert Greene's books. I like the historical anecdotes to make the point.
Some of the style info was really useful. I didn't expect there to be so much.

Lots of decent advice that Democrats, Greens, and #DemExit people could learn from. Nice style and class advice. Recipe for Italian gravy was delicious. Martini recipe win gin sounds delicious but I don’t drink. Hope the next generation of political women and men learn from this work.

This was by far the best book of Stone's

I read all three books before this one. I was waiting for this to come out. Roger Stone to me is more interesting than the Bush crime family..or how Hillary treats women..or the mastermind behind Jfk death..lbj. He was there.

Nice change of reading fare. Lots of hardy laughs and a refreshing dynamic to be a part of. Narrator was outstanding.

Definitely enjoyed the book, but could have used less rules to get the point across.

There was a lot about how to dress. I was expecting more focus on other subjects. Still, it was interesting.

best book by far! except for the Bible lol

sir I must say I am intrigued by the life you lived I must say keep up the good fight! #muller doesn't know who's he dealing with and he will fail! #nogodwetrust #godspeed Roger Stone!!!

Figure out what game, learn the rules, and score the goal. This is not just for political uses.