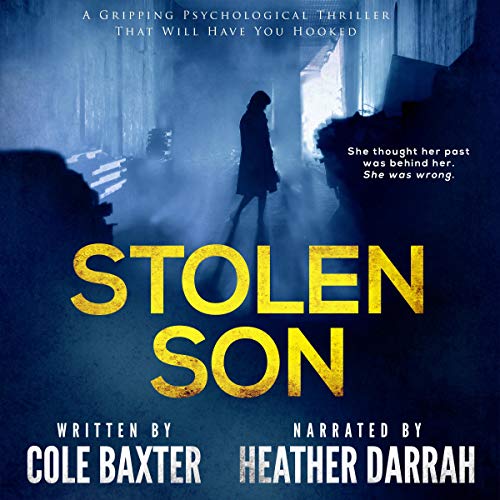 By: Cole Baxter
Narrated by: Heather Louise Darrah
Try for £0.00

First the messages came. Then her son was taken....

Now that it’s been ten years later, Annabeth is trying to live a normal life with her disabled son, Gregory....

She didn’t know who it was, but the messages kept coming. And then her son went missing.

When she realized that the police were useless, Annabeth knew she had to do everything she could to get her son back on her own.

But what she doesn’t know is that the kidnapper is far closer to her than she ever expected, and has been watching her every move.

Will she be able to get past the truth and get her son back unharmed?

Stolen Son is a dark and gripping psychological thriller is a page-turner with a twist that will have you at the edge of your seat.

What listeners say about Stolen Son

Great, thrilling and a fast read! Her autistic son makes the story even more realistic. All the elements for a great book are included. If the reader has ever been in a maze, it becomes SO very understandable!

I highly recommend this read!

Story line was very predictable, suspense seemed forced. Some of the scenes were unrealistic, i.e . police allowing a victim to watch interrogation of prime suspect..

I finished it, only because it wasn't too long of a book but the narrator was TERRIBLE!! The story was predictable and unbelievable most of the time. One of the worst I have listened to in a LONG time!!